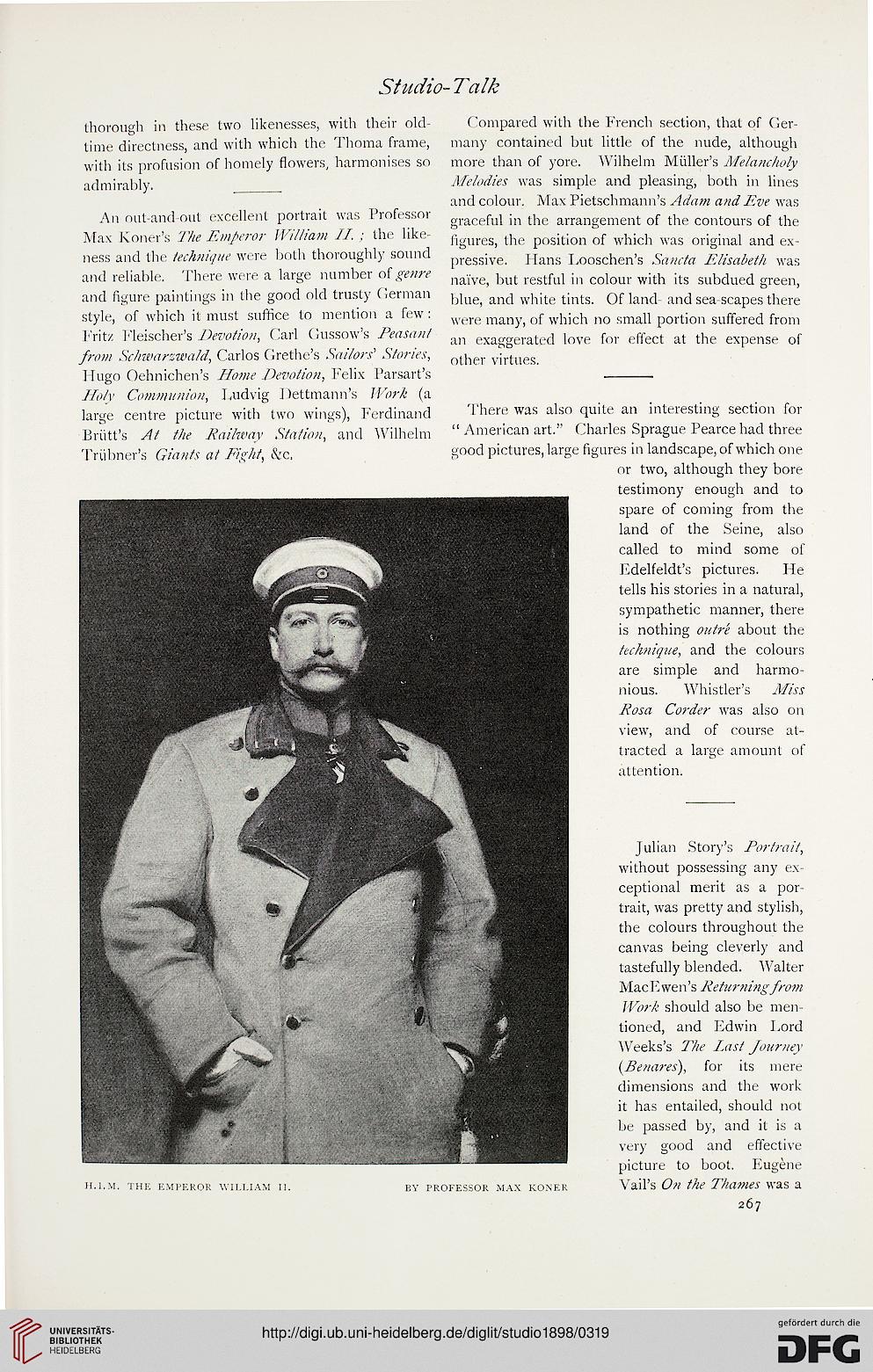 thorough in these two likenesses, with their old- Compared with the French section, that of Cler-
time directness, and with which the Thoma frame, many contained but little of the nude, although
with its profusion of homely flowers, harmonises so more than of yore. Wilhelm Miiller's Melancholy

admirably,__ Melodies was simple and pleasing, both in lines

and colour. Max Pietschmann's Adam and Eve was
An out and out excellent portrait was Professor graceml m the arrangement of the contours of the
Max Koner's The Emperor William II : the like- figureSj the position of which was origioal and ex-
ness and the technique were both thoroughly sound pressive> Hans Looschen's Sancta Elisabeth was
and reliable. There were a large number of genre n^ but restful in colou]. with ks subdued green>
and figure paintings in the good old trusty Cerman ])ln^ and whke tintg_ 0f land and sea scapes there
style, of which it must suffice to mention a few : were m^ of whjch nQ smaU portion suffered from
frit/ Fleischer's Devotion, Carl Gussow's Peasant an exaggerated love for effect at the expense of
from Schwarzwald, Carlos Crethe's Sailors' Stories, other virtues

large centre picture with two wings), Ferdinand There was also quite an interesting section for
Briitt's At the Railway Station, and Wilhelm " American art." Charles Sprague Pearce had three
Triibner's Giants at Fight, &c. Kood pictures, large figures in landscape, of which one

or two, although they bore
testimony enough and to
spare of coming from the
land of the Seine, also
called to mind some of
Edelfeldt's pictures. He
tells his stories in a natural,
sympathetic manner, there
is nothing outre about the
technique, and the colours
are simple and harmo-
nious. Whistler's Miss
Rosa Corder was also on
view, and of course at-
tracted a large amount of
attention.

Julian Story's Portrait,
without possessing any ex-
ceptional merit as a por-
trait, was pretty and stylish,
the colours throughout the
canvas being cleverly and
tastefully blended. Walter
Mac Ewen's Returningfro?n
Work should also be men-
tioned, and Edwin Lord
Weeks's The Last Journey
(Benares), for its mere
dimensions and the work
it has entailed, should not
be passed by, and it is a
very good and effective
picture to boot. Eugene
m.i.m. the emperor William ii. by professor max koner Vail's On the Thames was a