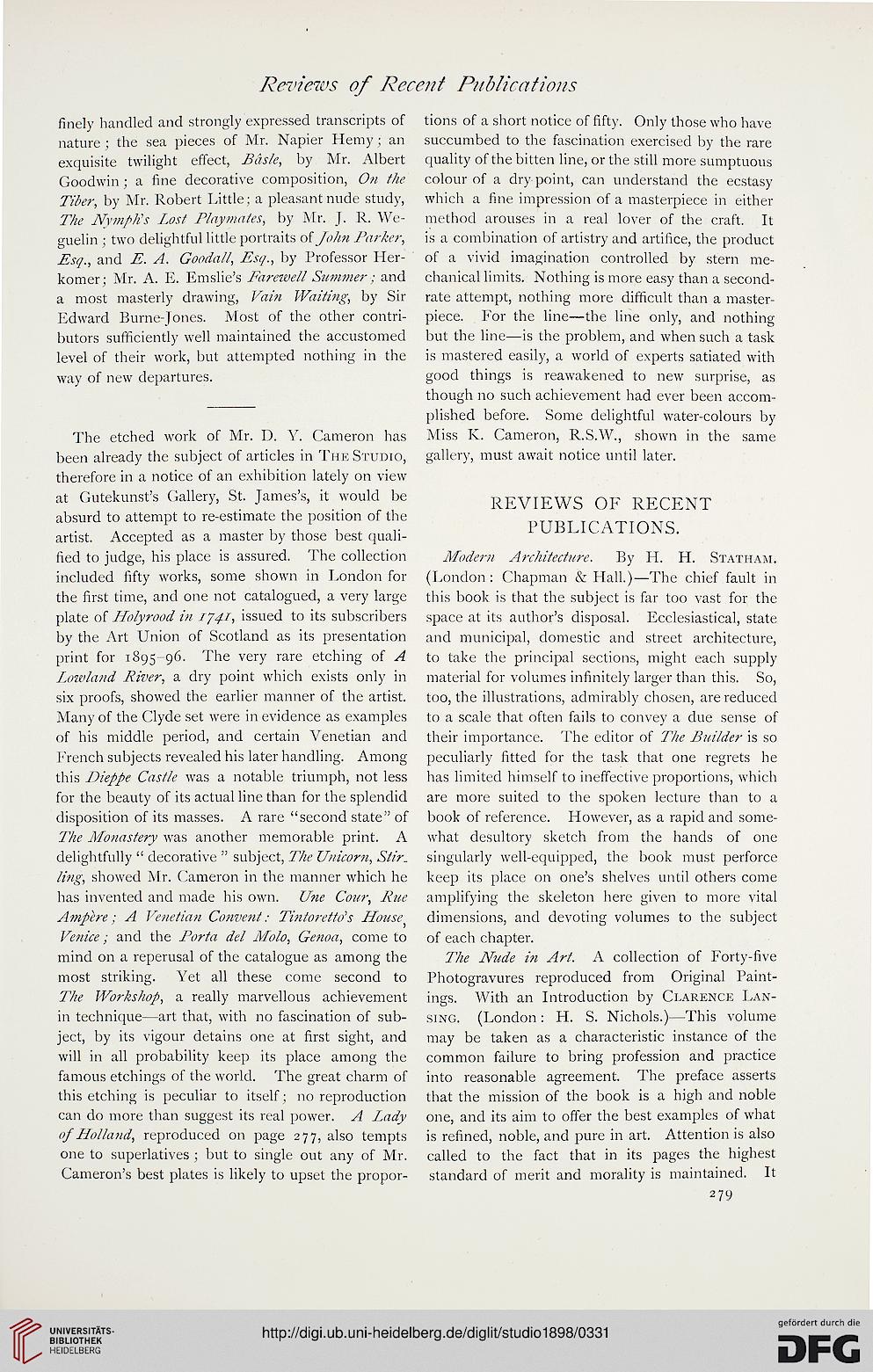 finely handled and strongly expressed transcripts of
nature ; the sea pieces of Mr. Napier Hemy ; an
exquisite twilight effect, Basle, by Mr. Albert
Goodwin ; a fine decorative composition, On the
Tiber, by Mr. Robert Little; a pleasant nude study,
The Nymph's Lost Playmates, by Mr. J. R. We-
guelin ; two delightful little portraits of John Parker,
Esq., and E. A. Goodall, Esq., by Professor Her-
komer; Mr. A. E. Emslie's Farewell Summer; and
a most masterly drawing, Vain Waiting, by Sir
Edward Burne-Jones. Most of the other contri-
butors sufficiently well maintained the accustomed
level of their work, but attempted nothing in the
way of new departures.

The etched work of Mr. D. Y. Cameron has
been already the subject of articles in The Studio,
therefore in a notice of an exhibition lately on view
at Gutekunst's Gallery, St. James's, it would be
absurd to attempt to re-estimate the position of the
artist. Accepted as a master by those best quali-
fied to judge, his place is assured. The collection
included fifty works, some shown in London for
the first time, and one not catalogued, a very large
plate of Holyrood in 1741, issued to its subscribers
by the Art Union of Scotland as its presentation
print for 1895-96. The very rare etching of A
Lowland River, a dry point which exists only in
six proofs, showed the earlier manner of the artist.
Many of the Clyde set were in evidence as examples
of his middle period, and certain Venetian and
French subjects revealed his later handling. Among
this Dieppe Castle was a notable triumph, not less
for the beauty of its actual line than for the splendid
disposition of its masses. A rare "second state" of
The Monastery was another memorable print. A
delightfully " decorative " subject, The Unicorn, Stir,
ling, showed Mr. Cameron in the manner which he
has invented and made his own. Une Cour, Rue
Ampere; A Venetian Convent: Tintoretto's House ^
Venice; and the Porta del Molo, Genoa, come to
mind on a reperusal of the catalogue as among the
most striking. Yet all these come second to
The Workshop, a really marvellous achievement
in technique—art that, with no fascination of sub-
ject, by its vigour detains one at first sight, and
will in all probability keep its place among the
famous etchings of the world. The great charm of
this etching is peculiar to itself; no reproduction
can do more than suggest its real power. A Lady
of Holland, reproduced on page 277, also tempts
one to superlatives ; but to single out any of Mr.
Cameron's best plates is likely to upset the propor-

tions of a short notice of fifty. Only those who have
succumbed to the fascination exercised by the rare
quality of the bitten line, or the still more sumptuous
colour of a dry point, can understand the ecstasy
which a fine impression of a masterpiece in either
method arouses in a real lover of the craft. It
is a combination of artistry and artifice, the product
of a vivid imagination controlled by stern me-
chanical limits. Nothing is more easy than a second-
rate attempt, nothing more difficult than a master-
piece. For the line—the line only, and nothing
but the line—is the problem, and when such a task
is mastered easily, a world of experts satiated with
good things is reawakened to new surprise, as
though no such achievement had ever been accom-
plished before. Some delightful water-colours by
Miss K. Cameron, R.S.W., shown in the same
gallery, must await notice until later.

Modern Architecture. By H. H. Statham.
(London : Chapman & Hall.)—The chief fault in
this book is that the subject is far too vast for the
space at its author's disposal. Ecclesiastical, state
and municipal, domestic and street architecture,
to take the principal sections, might each supply
material for volumes infinitely larger than this. So,
too, the illustrations, admirably chosen, are reduced
to a scale that often fails to convey a due sense of
their importance. The editor of The Builder is so
peculiarly fitted for the task that one regrets he
has limited himself to ineffective proportions, which
are more suited to the spoken lecture than to a
book of reference. However, as a rapid and some-
what desultory sketch from the hands of one
singularly well-equipped, the book must perforce
keep its place on one's shelves until others come
amplifying the skeleton here given to more vital
dimensions, and devoting volumes to the subject
of each chapter.

The Nude in Art. A collection of Forty-five
Photogravures reproduced from Original Paint-
ings. With an Introduction by Clarence Lan-
sing. (London : H. S. Nichols.)—This volume
may be taken as a characteristic instance of the
common failure to bring profession and practice
into reasonable agreement. The preface asserts
that the mission of the book is a high and noble
one, and its aim to offer the best examples of what
is refined, noble, and pure in art. Attention is also
called to the fact that in its pages the highest
standard of merit and morality is maintained. It