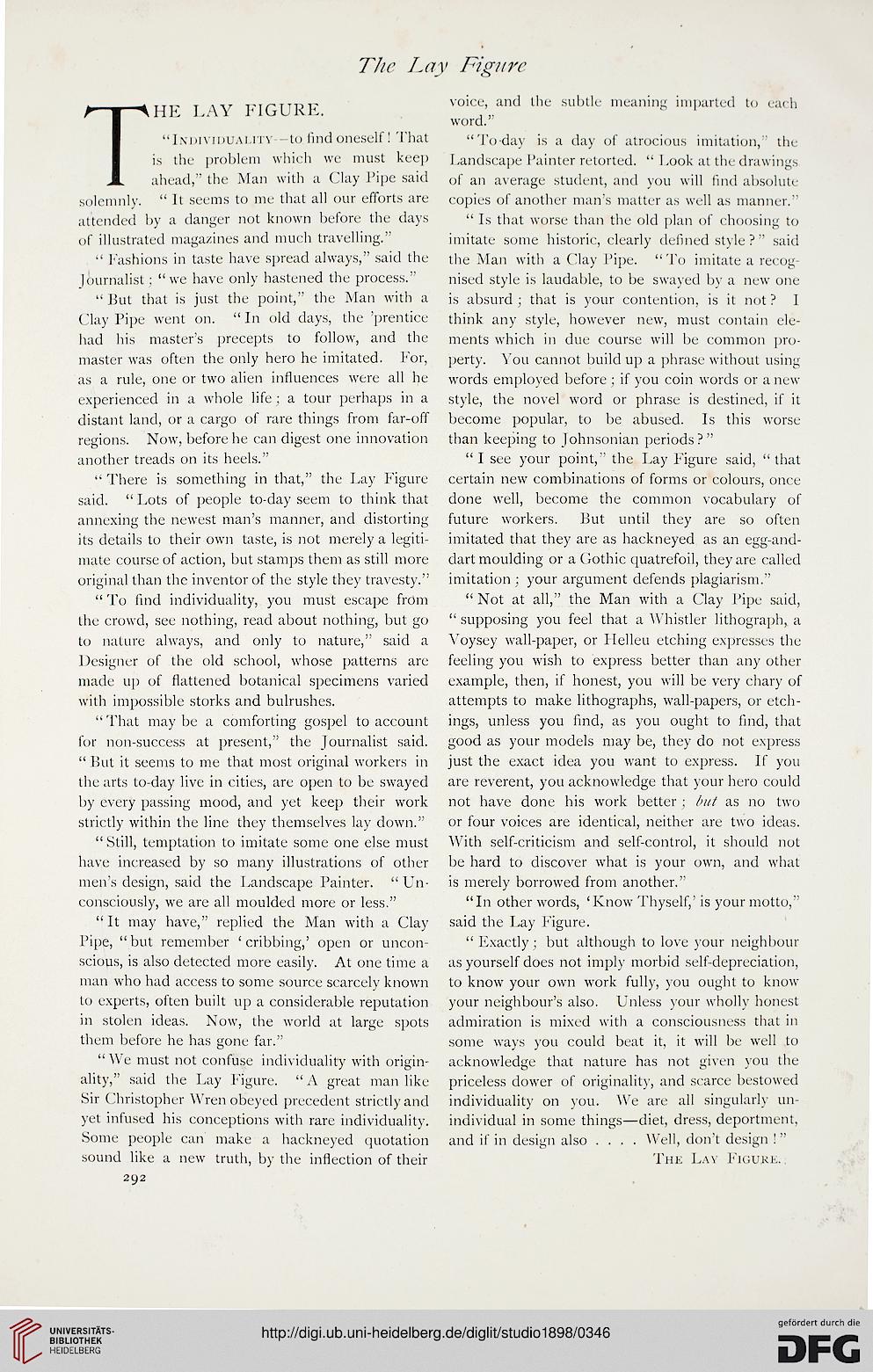 I "Individuality to.find oneself! that "To-day is a day of atrocious imitation, the

I is tlic problem which we must keep Landscape Painter retorted. " Look at the drawings

JL ahead," the Man with a Clay Pipe said of an average student, and you will find absolut

solemnly. " It seems to me that all our efforts are copies of another man's matter as well as manner."
attended by a danger not known before the days "Is that worse than the old plan of choosing to

of illustrated magazines and much travelling." imitate some historic, clearly defined style?" said

" Fashions in taste have spread always," said the the Man with a Clay Pipe. ''To imitate a recog

Journalist : "we have only hastened the process." nised style is laudable, to be swayed by a new one

"But that is just the point," the Man with a is absurd; that is your contention, is it not? 1

Clay Pipe went on. "In old days, the 'prentice think any style, however new, must contain cle-

had his master's precepts to follow, and the ments which in due course will be common pro

master was often the only hero he imitated. For, perty. You cannot build up a phrase without using

as a rule, one or two alien influences were all he words employed before ; if you coin words or anew

experienced in a whole life ; a tour perhaps in a style, the novel word or phrase is destined, if it

distant land, or a cargo of rare things from far-off become popular, to be abused. Is this worse

regions. Now, before he can digest one innovation than keeping to Johnsonian periods?"
another treads on its heels." " I see your point," the Lay Figure said, " that

" There is something in that," the Lay Figure certain new combinations of forms or colours, once

said. "Lots of people to-day seem to think that done well, become the common vocabulary of

annexing the newest man's manner, and distorting future workers. But until they are so often

its details to their own taste, is not merely a legiti- imitated that they are as hackneyed as an egg-and-

mate course of action, but stamps them as still more dart moulding or a Gothic quatrefoil, they are called

original than the inventor of the style they travesty." imitation ; your argument defends plagiarism."

" To find individuality, you must escape from " Not at all," the Man with a Clay Pipe said,

the crowd, see nothing, read about nothing, but go " supposing you feel that a Whistler lithograph, a

to nature always, and only to nature," said a Voysey wall-paper, or Flelleu etching expresses the

Designer of the old school, whose patterns are feeling you wish to express better than any other

made up of flattened botanical specimens varied example, then, if honest, you will be very char)' of

with impossible storks and bulrushes. attempts to make lithographs, wrall-papers, or etch-

" That maybe a comforting gospel to account ings, unless you find, as you ought to find, that

for non-success at present," the Journalist said, good as your models may be, they do not express

" But it seems to me that most original workers in just the exact idea you want to express. If you

the arts to-day live in cities, are open to be swayed are reverent, you acknowledge that your hero could

by every passing mood, and yet keep their work not have done his wrork better ; but as no two

strictly within the line they themselves lay down." or four voices are identical, neither are two ideas.

"Still, temptation to imitate some one else must With self-criticism and self-control, it should not

have increased by so many illustrations of other be hard to discover wrhat is your own, and what

men's design, said the Landscape Painter. "Un- is merely borrowed from another."
consciously, we are all moulded more or less." "In other words, 'Knowr Thyself,' is your motto,"

" It may have," replied the Man with a Clay said the Lay Figure.
Pipe, "but remember 'cribbing,' open or uncon- " Flxactly ; but although to love your neighbour

scious, is also detected more easily. At one time a as yourself does not imply morbid self-depreciation,

man who had access to some source scarcely known to know your own work fully, you ought to know

to experts, often built up a considerable reputation your neighbour's also. Unless your wholly honest

in stolen ideas. Now, the world at large spots admiration is mixed with a consciousness that in

them before he has gone far." some ways you could beat it, it will be well to

Sir Christopher Wren obeyed precedent strictly and individuality on you. We are all singularly un-

yet infused his conceptions with rare individuality. individual in some things—diet, dress, deportment.

Some people can make a hackneyed quotation and if in design also .... Well, don't design !"
sound like a new truth, by the inflection of their The L.\\ Fiol rk.