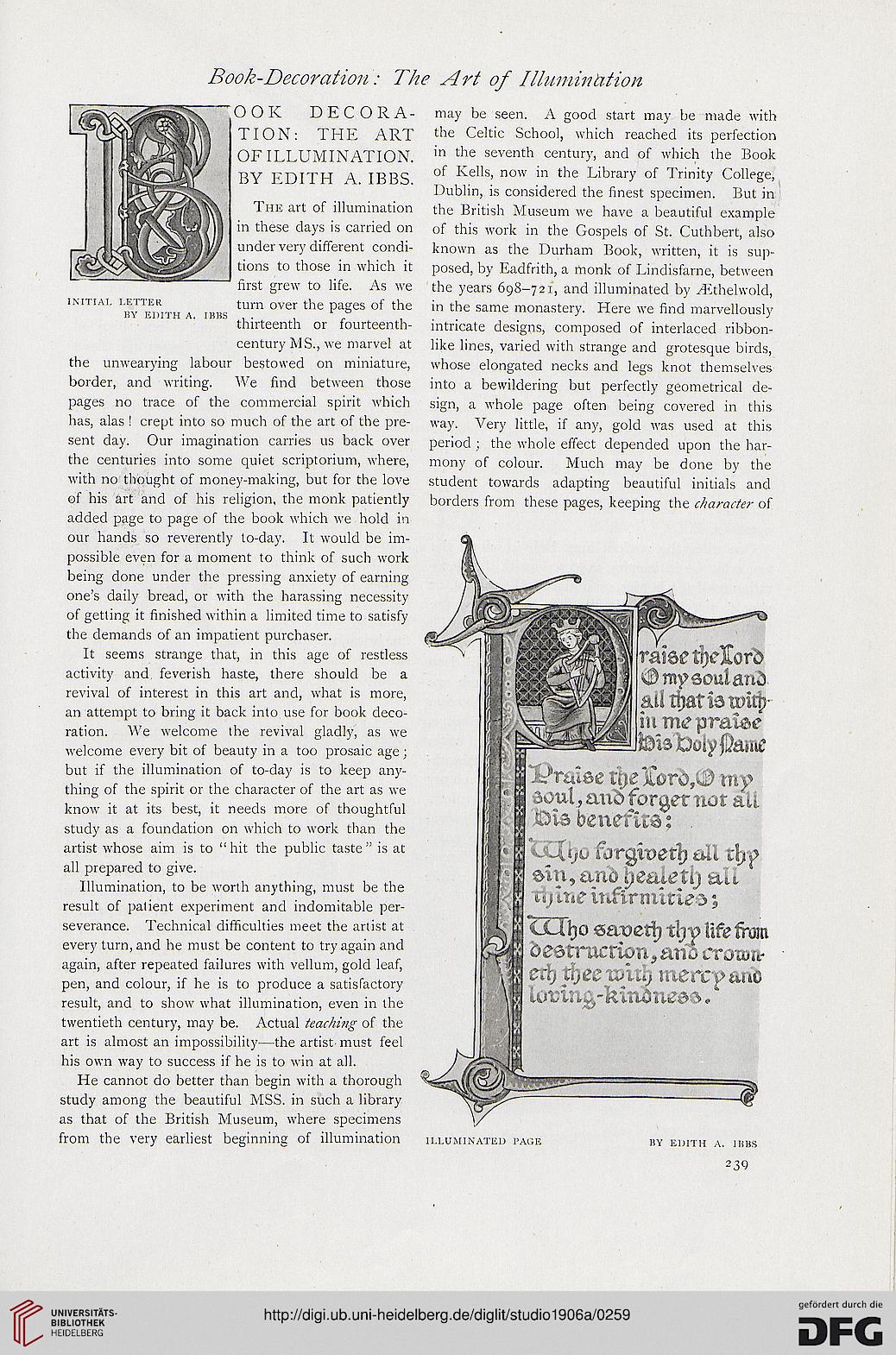 Information about OCR text
Book-Decoration: The Art of Illumination

OOK DECORA- may be seen. A good start may be made with

TION: THE ART tne Celtic School, which reached its perfection

OF ILLUMINATION ,n tne seventn century, and of which the Book

Dublin, is considered the finest specimen. But in

in these days is carried on of this work in the Gospels of St. Cuthbert, also

under very different condi- known as the Durham Book, written, it is sup-

tions to those in which it posed, by Eadfrith, a monk of Lindisfarne, between

initial letter turn over the pages of the in the same monastery. Here we find marvellously

thirteenth or fourteenth- intricate designs, composed of interlaced ribbon-
century MS., we marvel at like lines, varied with strange and grotesque birds,
the unwearying labour bestowed on miniature, whose elongated necks and legs knot themselves
border, and writing. We find between those into a bewildering but perfectly geometrical de-
pages no trace of the commercial spirit which sign, a whole page often being covered in this
has, alas ! crept into so much of the art of the pre- way. Very little, if any, gold was used at this
sent day. Our imagination carries us back over period ; the whole effect depended upon the har-
the centuries into some quiet scriptorium, where, mony of colour. Much may be done by the
with no thought of money-making, but for the love student towards adapting beautiful initials and
of his art and of his religion, the monk patiently borders from these pages, keeping the character of
added page to page of the book which we hold in
our hands so reverently to-day. It would be im-
possible even for a moment to think of such work
being done under the pressing anxiety of earning
one's daily bread, or with the harassing necessity
of getting it finished within a limited time to satisfy
the demands of an impatient purchaser. ! i 1

revival of interest in this art and, what is more,
an attempt to bring it back into use for book deco-
ration. We welcome the revival gladly, as we
welcome every bit of beauty in a too prosaic age;
but if the illumination of to-day is to keep any-

thing of the spirit or the character of the art as we fP; BOul, iX\\b foTaCtUOt ill

know it at its best, it needs more of thoughtful iff | fylB bCWCf l» ?

study as a foundation on which to work than the

Illumination, to be worth anything must be the ■>R ti.lt.e infirmit!^

result of patient experiment and indomitable per-
severance. Technical difficulties meet the artist at pL* S CjClfjO SftDCtt) t\jX> lift froiU
every turn, and he must be content to try again and jjPjH 5COt"TUCVioTl £U10 CTOXDXt
again, after repeated failures with vellum, gold leaf, K|R gft. tDlth UlCrCP UIlC
pen, and colour, if he is to produce a satisfactory MM r j,^ tjin^WAA '
result, and to show what illumination, even in the
twentieth century, may be. Actual teachwg of the
art is almost an impossibility—the artist must feel
his own way to success if he is to win at all.

He cannot do better than begin with a thorough
study among the beautiful MSS. in such a library
as that of the British Museum, where specimens
from the very earliest beginning of illumination illuminated page isy edith a. ihbs