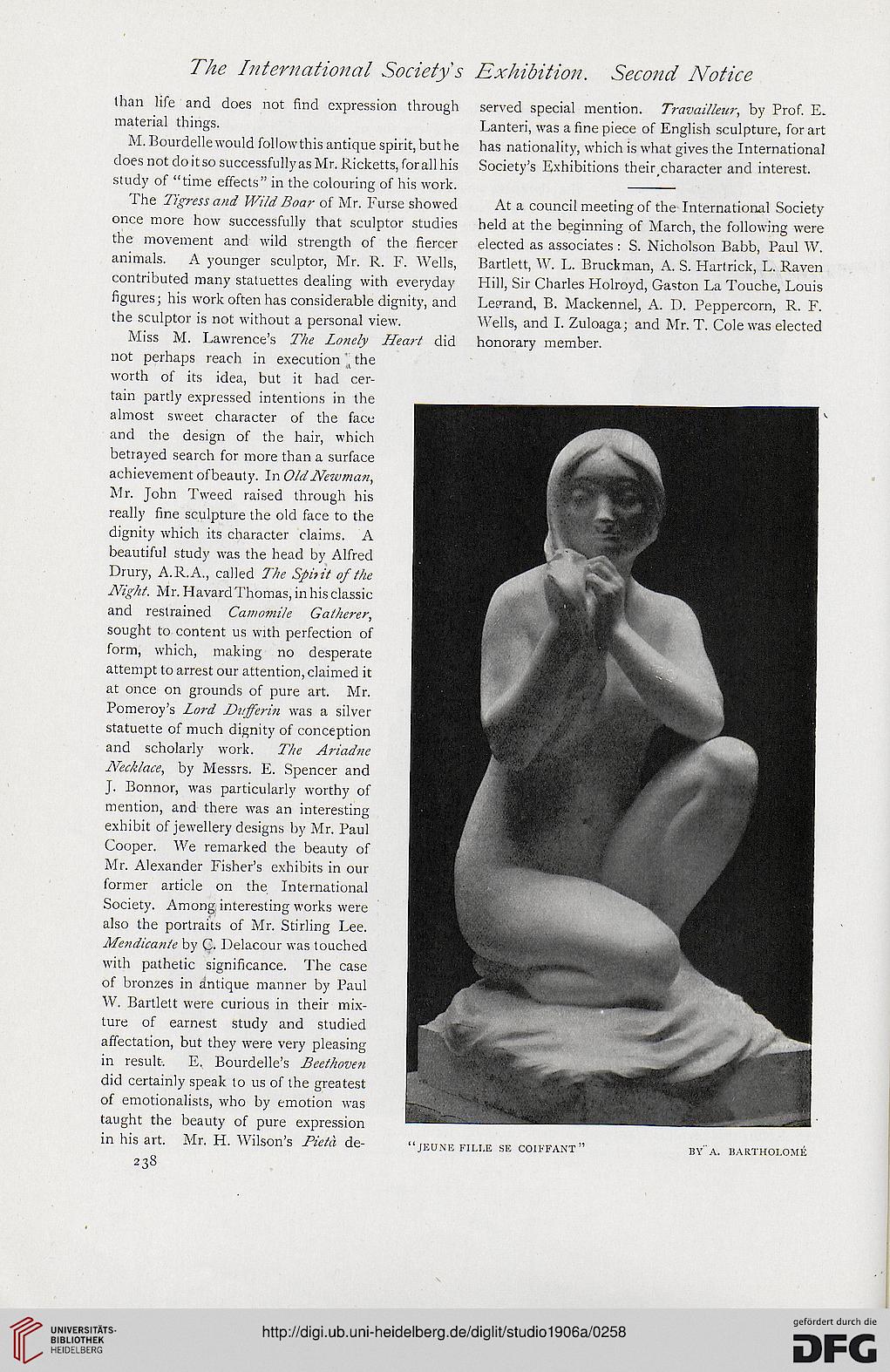 than life and does not find expression through served special mention. Travailleur, by Prof. E.

material things. Lanteri, was a fine piece of English sculpture, for art

M.Bourdellewouldfollowthis antique spirit, buthe has nationality, which is what gives the International

study of "time effects" in the colouring of his work. -

The Tigress and Wild Boar of Mr. Furse showed At a council meeting of the International Society

once more how successfully that sculptor studies held at the beginning of March, the following were

the movement and wild strength of the fiercer elected as associates : S. Nicholson Babb, Paul W.

figures; his work often has considerable dignity, and Leerand, B. Mackennel, A. D. Peppercorn, R. F.

the sculptor is not without a personal view. Wells, and I. Zuloaga; and Mr. T. Cole was elected

not perhaps reach in execution\the

worth of its idea, but it had cer-
tain partly expressed intentions in the

almost sweet character of the face

and the design of the hair, which

betrayed search for more than a surface

achievement of beauty. In Old Neivman,

Mr. John Tweed raised through his

really fine sculpture the old face to the

dignity which its character claims. A

beautiful study was the head by Alfred

Drury, A.R.A., called The Spirit of the

form, which, making no desperate

attempt to arrest our attention, claimed it

at once on grounds of pure art. Mr.

Pomeroy's Lord Dufferin was a silver

statuette of much dignity of conception

and scholarly work. The Ariadne

Necklace, by Messrs. E. Spencer and

J. Bonnor, was particularly worthy of

mention, and there was an interesting

Cooper. We remarked the beauty of

Mr. Alexander Fisher's exhibits in our

former article on the International

Society. Among interesting works were

Mendicante by C Delacour was touched

with pathetic significance. The case

of bronzes in antique manner by Paul

W. Bartlett were curious in their mix-
ture of earnest study and studied

affectation, but they were very pleasing

did certainly speak to us of the greatest

of emotionalists, who by emotion was

taught the beauty of pure expression