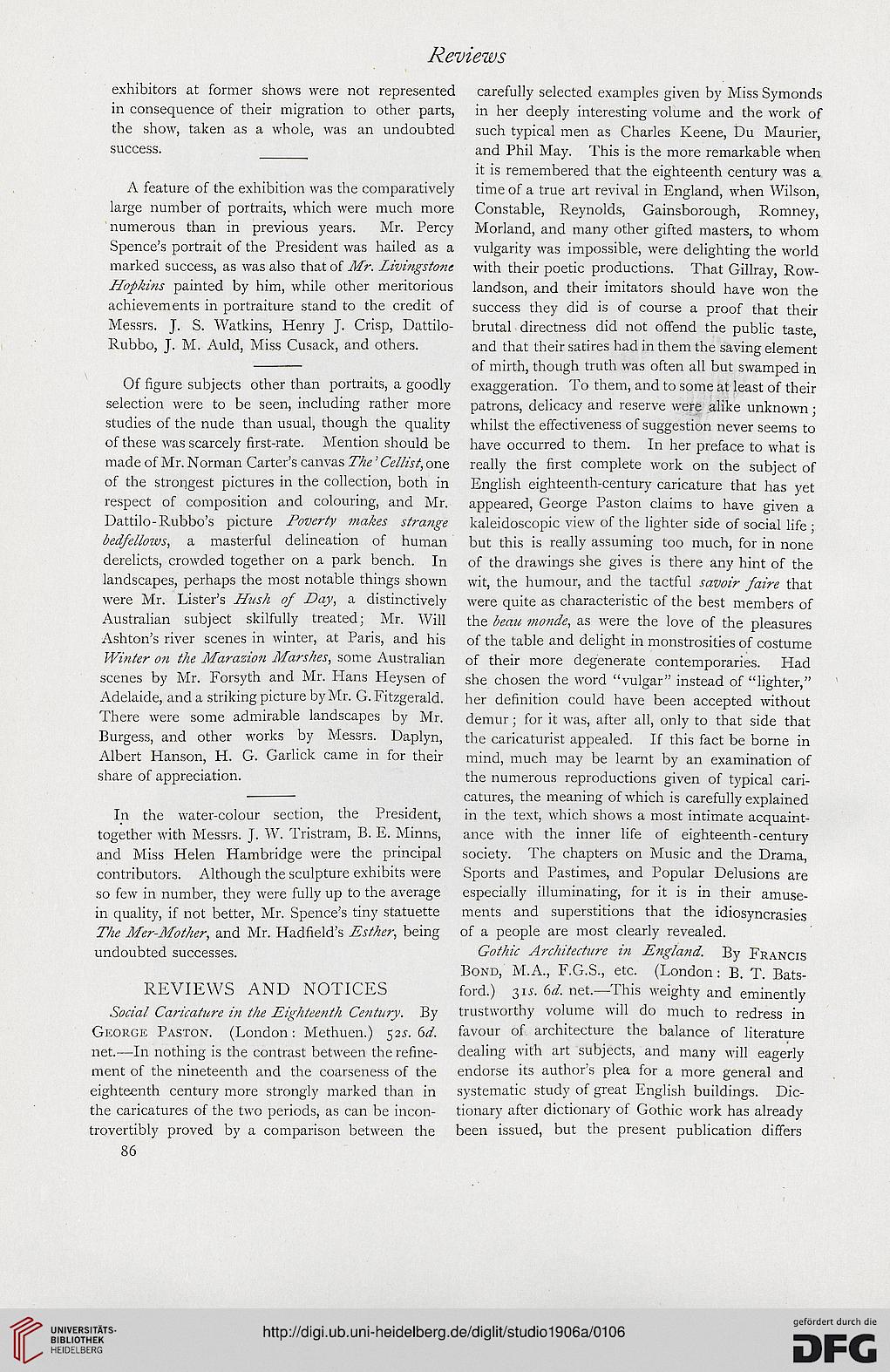 exhibitors at former shows were not represented
in consequence of their migration to other parts,
the show, taken as a whole, was an undoubted
success.

A feature of the exhibition was the comparatively
large number of portraits, which were much more
numerous than in previous years. Mr. Percy
Spence's portrait of the President was hailed as a
marked success, as was also that of Mr. Livingstone
Hopkins painted by him, while other meritorious
achievements in portraiture stand to the credit of
Messrs. J. S. Watkins, Henry J. Crisp, Dattilo-
Rubbo, J. M. Auld, Miss Cusack, and others.

Of figure subjects other than portraits, a goodly
selection were to be seen, including rather more
studies of the nude than usual, though the quality
of these was scarcely first-rate. Mention should be
made of Mr. Norman Carter's canvas The' Cellist, one
of the strongest pictures in the collection, both in
respect of composition and colouring, and Mr.
Dattilo-Rubbo's picture Poverty makes strange
bedfellows, a masterful delineation of human
derelicts, crowded together on a park bench. In
landscapes, perhaps the most notable things shown
were Mr. Lister's Hush of Day, a distinctively
Australian subject skilfully treated; Mr. Will
Ashton's river scenes in winter, at Paris, and his
Winter on the Marazion Marshes, some Australian
scenes by Mr. Forsyth and Mr. Hans Heysen of
Adelaide, and a striking picture by Mr. G.Fitzgerald.
There were some admirable landscapes by Mr.
Burgess, and other works by Messrs. Daplyn,
Albert Hanson, H. G. Garlick came in for their
share of appreciation.

In the water-colour section, the President,
together with Messrs. J. W. Tristram, B. E. Minns,
and Miss Helen Hambridge were the principal
contributors. Although the sculpture exhibits were
so few in number, they were fully up to the average
in quality, if not better, Mr. Spence's tiny statuette
The Mer-Mother, and Mr. Hadfield's Esther, being
undoubted successes.

Social Caricature in the Eighteenth Century. By
George Paston. (London: Methuen.) 52.?. 6d.
net.—In nothing is the contrast between the refine-
ment of the nineteenth and the coarseness of the
eighteenth century more strongly marked than in
the caricatures of the two periods, as can be incon-
trovertibly proved by a comparison between the
86

carefully selected examples given by Miss Symonds
in her deeply interesting volume and the work of
such typical men as Charles Keene, Du Maurier,
and Phil May. This is the more remarkable when
it is remembered that the eighteenth century was a
time of a true art revival in England, when Wilson,
Constable, Reynolds, Gainsborough, Romney,
Morland, and many other gifted masters, to whom
vulgarity was impossible, were delighting the world
with their poetic productions. That Gillray, Row-
landson, and their imitators should have won the
success they did is of course a proof that their
brutal directness did not offend the public taste,
and that their satires had in them the saving element
of mirth, though truth was often all but swamped in
exaggeration. To them, and to some at least of their
patrons, delicacy and reserve were alike unknown;
whilst the effectiveness of suggestion never seems to
have occurred to them. In her preface to what is
really the first complete work on the subject of
English eighteenth-century caricature that has yet
appeared, George Paston claims to have given a
kaleidoscopic view of the lighter side of social life ;
but this is really assuming too much, for in none
of the drawings she gives is there any hint of the
wit, the humour, and the tactful savoir faire that
were quite as characteristic of the best members of
the beau monde, as were the love of the pleasures
of the table and delight in monstrosities of costume
of their more degenerate contemporaries. Had
she chosen the word "vulgar" instead of "lighter,"
her definition could have been accepted without
demur; for it was, after all, only to that side that
the caricaturist appealed. If this fact be borne in
mind, much may be learnt by an examination of
the numerous reproductions given of typical cari-
catures, the meaning of which is carefully explained
in the text, which shows a most intimate acquaint-
ance with the inner life of eighteenth-century
society. The chapters on Music and the Drama,
Sports and Pastimes, and Popular Delusions are
especially illuminating, for it is in their amuse-
ments and superstitions that the idiosyncrasies
of a people are most clearly revealed.

Gothic Architecture in England. By Francis
Bond, M.A., F.G.S., etc. (London: B. T. Bats-
ford.) 31s. 6d. net.—This weighty and eminently
trustworthy volume will do much to redress in
favour of architecture the balance of literature
dealing with art subjects, and many will eagerly
endorse its author's plea for a more general and
systematic study of great English buildings. Dic-
tionary after dictionary of Gothic work has already
been issued, but the present publication differs