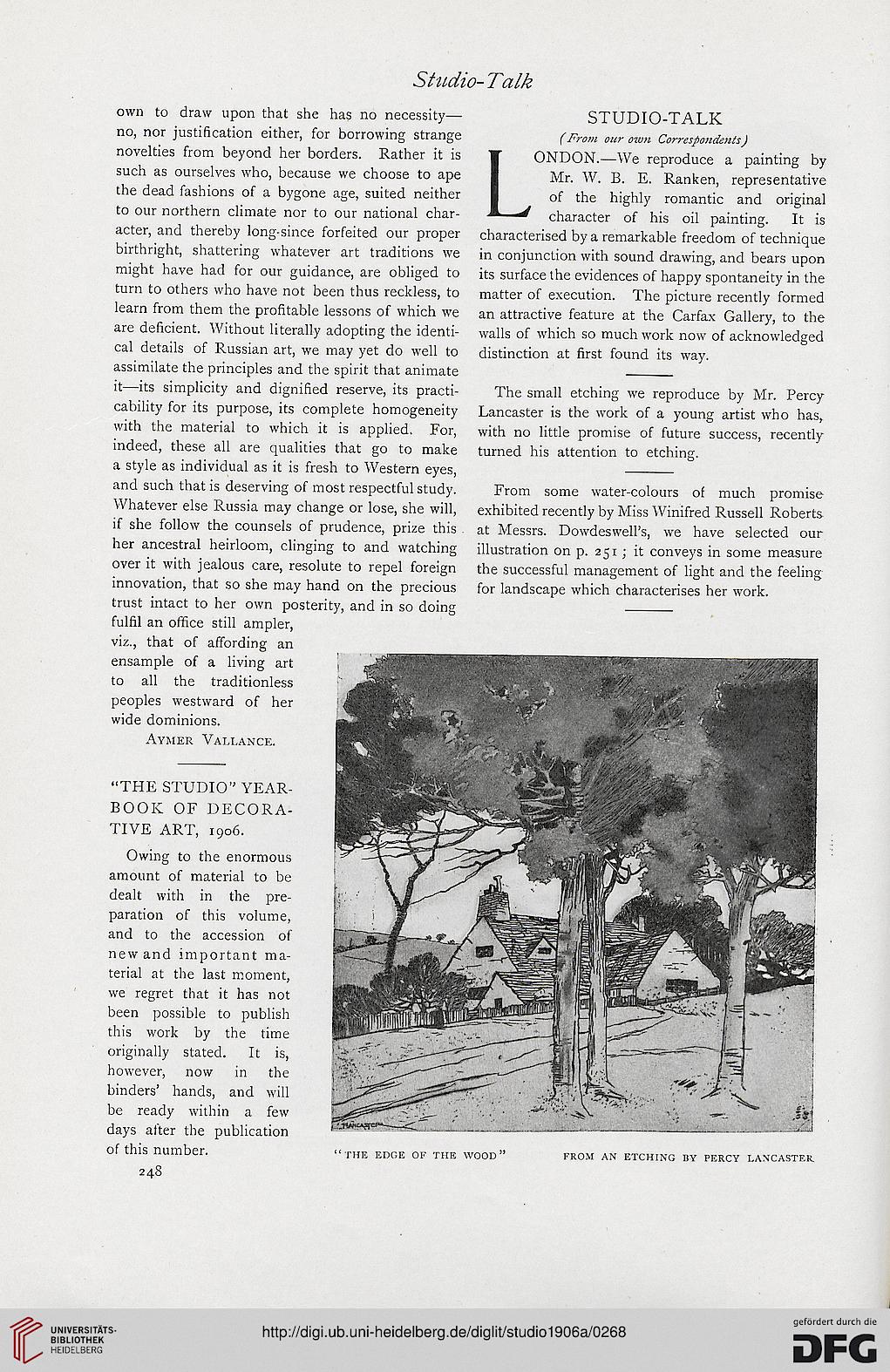 own to draw upon that she has no necessity— STUDIO-TALK

no, nor justification either, for borrowing strange (From our own Correspondents)

novelties from beyond her borders. Rather it is TT ONDON.—We reproduce a painting by

such as ourselves who, because we choose to ape Mr. W. B. E. Ranken, representative

the dead fashions of a bygone age, suited neither of the highly romantic and original

to our northern climate nor to our national char- m J character of his oil painting. It is

acter, and thereby long-since forfeited our proper characterised by a remarkable freedom of technique

birthright, shattering whatever art traditions we in conjunction with sound drawing, and bears upon

might have had for our guidance, are obliged to its surface the evidences of happy spontaneity in the

turn to others who have not been thus reckless, to matter of execution. The picture recently formed

learn from them the profitable lessons of which we an attractive feature at the Carfax Gallery, to the

are deficient. Without literally adopting the identi- walls of which so much work now of acknowledged

cal details of Russian art, we may yet do well to distinction at first found its way.

assimilate the principles and the spirit that animate -

it—its simplicity and dignified reserve, its practi- The small etching we reproduce by Mr. Percy

cability for its purpose, its complete homogeneity Lancaster is the work of a young artist who has,

with the material to which it is applied. For, with no little promise of future success, recently

indeed, these all are qualities that go to make turned his attention to etching,

a style as individual as it is fresh to Western eyes, -

and such that is deserving of most respectful study. From some water-colours of much promise

Whatever else Russia may change or lose, she will, exhibited recently by Miss Winifred Russell Roberts

if she follow the counsels of prudence, prize this at Messrs. DowdeswelFs, we have selected our

her ancestral heirloom, clinging to and watching illustration on p. 251 ; it conveys in some measure

over it with jealous care, resolute to repel foreign the successful management of light and the feeling

innovation, that so she may hand on the precious for landscape which characterises her work.

trust intact to her own posterity, and in so doing -

fulfil an office still ampler,
viz., that of affording an
ensample of a living art
to all the traditionless
peoples westward of her
wide dominions.

Owing to the enormous
amount of material to be
dealt with in the pre-
paration of this volume,
and to the accession of
new and important ma-
terial at the last moment,
we regret that it has not
been possible to publish
this work by the time
originally stated. It is,
however, now in the
binders' hands, and will
be ready within a few
days after the publication
of this number. "the edge of the wood" from an etching by percy Lancaster