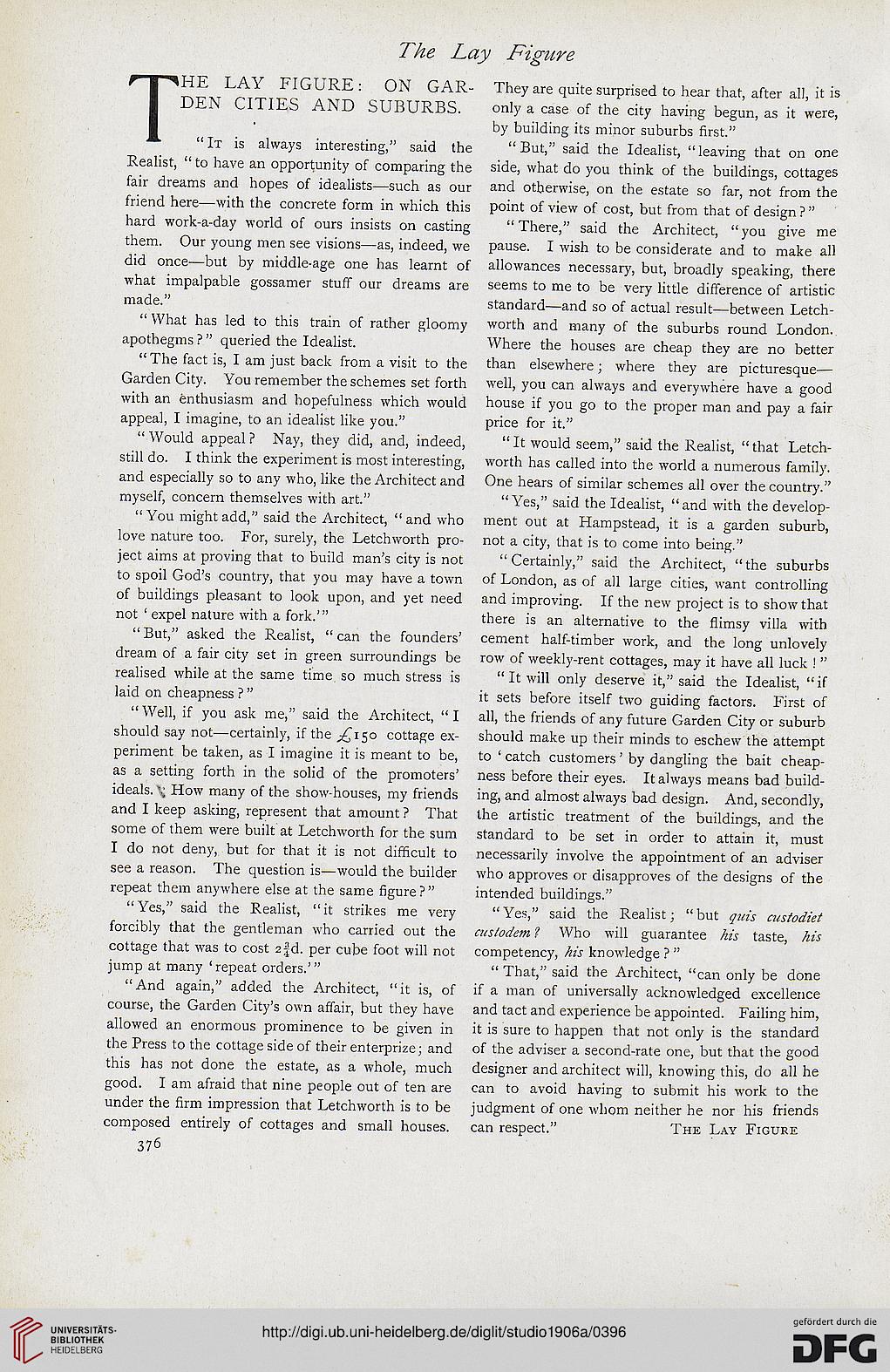 THE LAY FIGURE: ON GAR- They are quite surprised to hear that, after all, it is

DEN CITIES AND SUBURBS. only a case of the city having begun, as it were,
by building its minor suburbs first."

" It is always interesting," said the " But," said the Idealist, " leaving that on one

Realist, " to have an opportunity of comparing the side, what do you think of the buildings, cottages

fair dreams and hopes of idealists—such as our and otherwise, on the estate so far, not from the

friend here—with the concrete form in which this point of view of cost, but from that of design ? "

hard work-a-day world of ours insists on casting "There," said the Architect, "you give me

them. Our young men see visions—as, indeed, we pause. I wish to be considerate and to make all

did once—but by middle-age one has learnt of allowances necessary, but, broadly speaking, there

made." standard—and so of actual result—between Letch-

" What has led to this train of rather gloomy worth and many of the suburbs round London,

apothegms ?" queried the Idealist. Where the houses are cheap they are no better

"The fact is, I am just back from a visit to the than elsewhere; where they are picturesque—

Garden City. You remember the schemes set forth well, you can always and everywhere have a good

appeal, I imagine, to an idealist like you." price for it."

"Would appeal? Nay, they did, and, indeed, " It would seem," said the Realist, "that Letch-
still do. I think the experiment is most interesting, worth has called into the world a numerous family,
and especially so to any who, like the Architect and One hears of similar schemes all over the country."
myself, concern themselves with art." "Yes," said the Idealist, "and with the develop-
" You might add," said the Architect, " and who ment out at Hampstead, it is a garden suburb,
love nature too. For, surely, the Letchworth pro- not a city, that is to come into being."
ject aims at proving that to build man's city is not "Certainly," said the Architect, "the suburbs
to spoil God's country, that you may have a town of London, as of all large cities, want controlling
of buildings pleasant to look upon, and yet need and improving. If the new project is to show that
not ' expel nature with a fork.'" there is an alternative to the flimsy villa with
" But," asked the Realist, " can the founders' cement half-timber work, and the long unlovely
dream of a fair city set in green surroundings be row of weekly-rent cottages, may it have all luck ! "
realised while at the same time so much stress is " It will only deserve it," said the Idealist, "if
laid on cheapness ?" it sets before itself two guiding factors. First of
" Well, if you ask me," said the Architect, " I all, the friends of any future Garden City or suburb
should say not—certainly, if the ^150 cottage ex- should make up their minds to eschew the attempt
periment be taken, as I imagine it is meant to be, to ' catch customers' by dangling the bait cheap-
as a setting forth in the solid of the promoters' ness before their eyes. It always means bad build-
ideals. \ How many of the show-houses, my friends ing, and almost always bad design. And, secondly,
and I keep asking, represent that amount ? That the artistic treatment of the buildings, and the
some of them were built at Letchworth for the sum standard to be set in order to attain it, must
I do not deny, but for that it is not difficult to necessarily involve the appointment of an adviser
see a reason. The question is—would the builder who approves or disapproves of the designs of the
repeat them anywhere else at the same figure?" intended buildings."

forcibly that the gentleman who carried out the custodem ? Who will guarantee his taste, his

cottage that was to cost 2|d. per cube foot will not competency, his knowledge ? "

jump at many 'repeat orders.'" " That," said the Architect, "can only be done

"And again," added the Architect, "it is, of if a man of universally acknowledged excellence

course, the Garden City's own affair, but they have and tact and experience be appointed. Failing him,

the Press to the cottage side of their enterprize; and of the adviser a second-rate one, but that the good

this has not done the estate, as a whole, much designer and architect will, knowing this, do all he

good. I am afraid that nine people out of ten are can to avoid having to submit his work to the

composed entirely of cottages and small houses. can respect." The Lay Figure
376