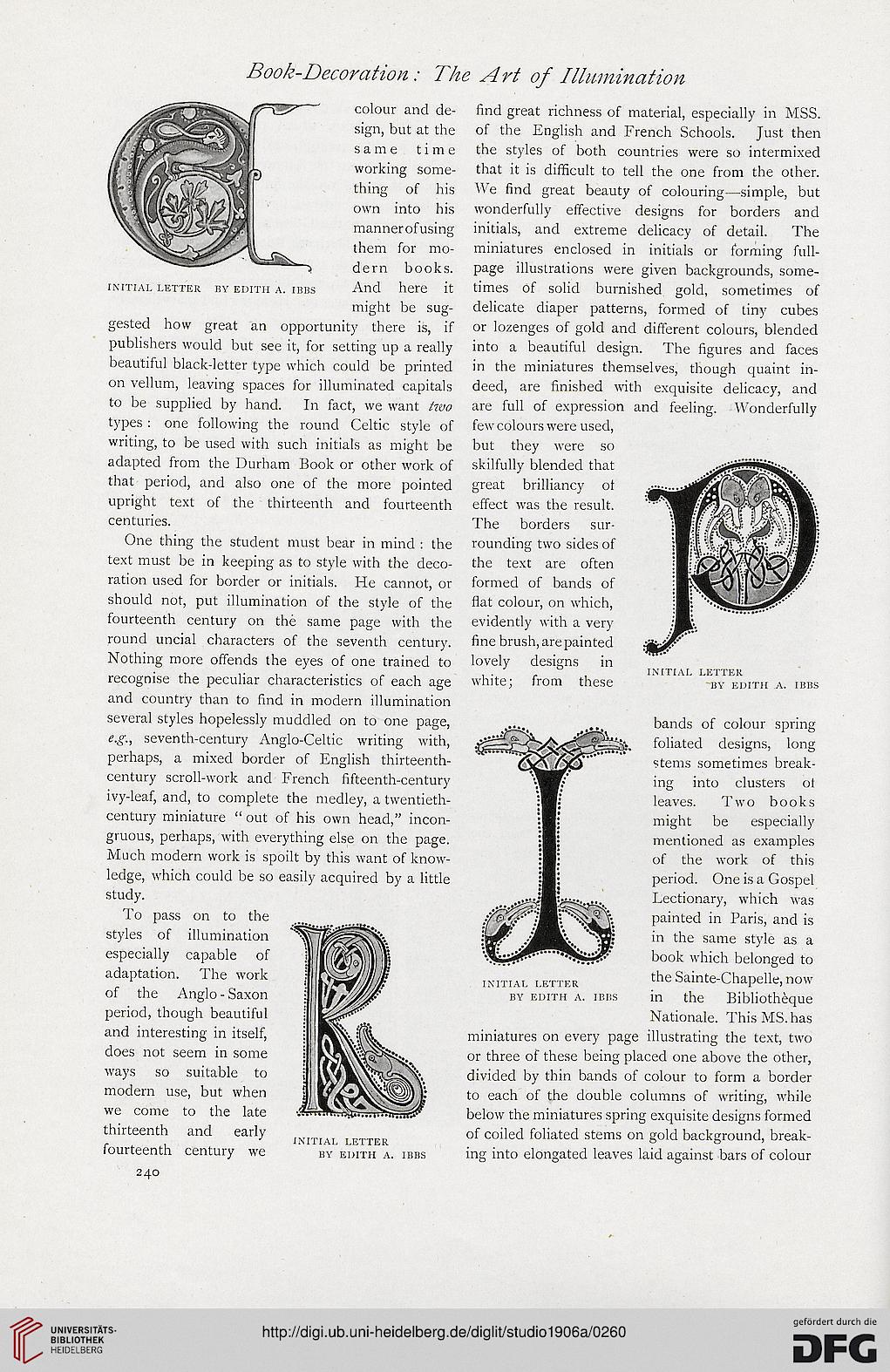 Information about OCR text
Book-Decoration: The Art of Illumination

sign, but at the of the English and French Schools. Just then

same time the styles of both countries were so intermixed

working some- that it is difficult to tell the one from the other,

thing of his We find great beauty of colouring—simple, but

own into his wonderfully effective designs for borders and

manner of using initials, and extreme delicacy of detail. The

them for mo- miniatures enclosed in initials or forming full-

dern books, page illustrations were given backgrounds, some-

tNiTiAL letter by edith a. ibbs And here it times of solid burnished gold, sometimes of

might be sug- delicate diaper patterns, formed of tiny cubes

gested how great an opportunity there is, if or lozenges of gold and different colours, blended

publishers would but see it, for setting up a really into a beautiful design. The figures and faces

beautiful black-letter type which could be printed in the miniatures themselves, though quaint in-

on vellum, leaving spaces for illuminated capitals deed, are finished with exquisite delicacy, and

to be supplied by hand. In fact, we want two are full of expression and feeling. Wonderfully

types: one following the round Celtic style of few colours were used,

writing, to be used with such initials as might be but they were so

adapted from the Durham Book or other work of skilfully blended that c^^^^^.

that period, and also one of the more [jointed great brilliancy of dttjagflRgT-^;f^j3«

upright text of the thirteenth and fourteenth effect was the result. '''"'^B^^^Tlj^^M^

One thing the student must bear in mind : the rounding two sides of S»f --'lly

ration used for border or initials. He cannot, or formed of bands of li^L^ H

should not, put illumination of the style of the flat colour, on which, ill ^fft^J^

fourteenth century on the same page with the evidently with a very Jjjt.

round uncial characters of the seventh century, fine brush, are painted jgjggr'

Nothing more offends the eyes of one trained to lovely designs in r„,_,AI .____„

recognise the peculiar characteristics of each age white; from these -by edith a. ibbs
and country than to find in modern illumination

several styles hopelessly muddled on to one page, .... bands of colour spring
e.g., seventh-century Anglo-Celtic writing with, ^^f^y^t^^—.'i. foliated designs, long
perhaps, a mixed border of English thirteenth- j^y/^Q^^ stems sometimes break-
century scroll-work and French fifteenth-century '^jff mS mto clusters ot
ivy-leaf, and, to complete the medley, a twentieth- :H: leaves. Two books
century miniature " out of his own head," incon- :R might be especially
gruous, perhaps, with everything else on the page. mentioned as examples

Much modern work is spoilt by this want of know- :S: of the work of this

ledge, which could be so easily acquired by a little jli period. One is a Gospel

To pass on to the /fipWf^jl painted in Paris, and is

especially capable of j 1 Qrifc^'hook which belonged to

and interesting in itself, j k^tifl^ miniatures on every page illustrating the text, two

does not seem in some I ^Ksko^C?^*. or three of these being placed one above the other,

ways so suitable to \ LWV :/-n\ divided by thin bands of colour to form a border

we come to the late ■.'feSfc^tii^^fis^ below the miniatures spring exquisite designs formed

fourteenth century we by edith a. ibbs ing into elongated leaves laid against bars of colour