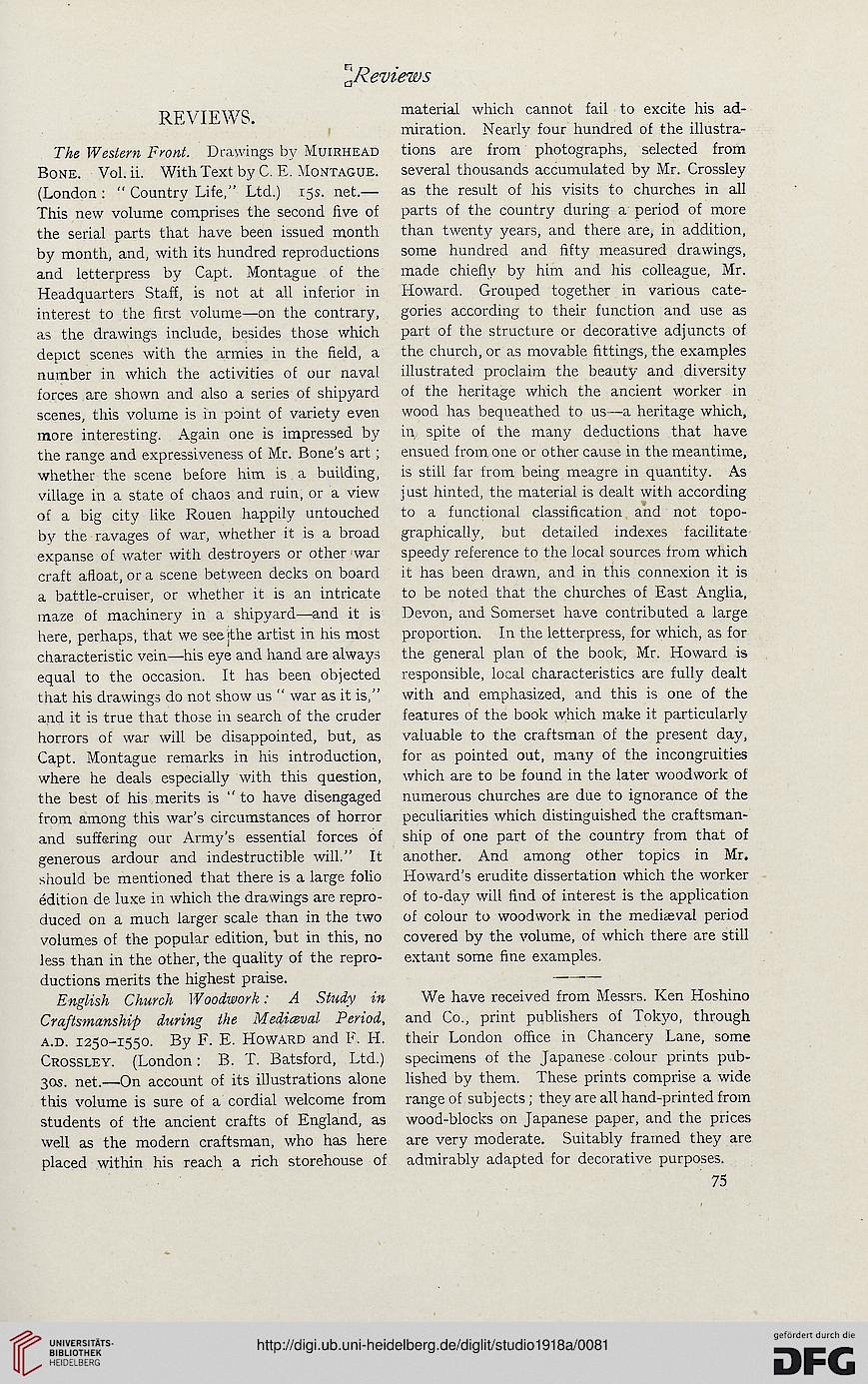 The Western Front. Drawings by Muirhead
Bone. Vol. ii. With Text by C. E. Montague.
(London : " Country Life," Ltd.) 15s. net.—
This new volume comprises the second five of
the serial parts that have been issued month
by month, and, with its hundred reproductions
and letterpress by Capt. Montague of the
Headquarters Staff, is not at all inferior in
interest to the first volume—on the contrary,
as the drawings include, besides those which
depict scenes with the armies in the field, a
number in which the activities of our naval
forces are shown and also a series of shipyard
scenes, this volume is in point of variety even
more interesting. Again one is impressed by
the range and expressiveness of Mr. Bone's art;
whether the scene before him is a building,
village in a state of chaos and ruin, or a view
of a big city like Rouen happily untouched
by the ravages of war, whether it is a broad
expanse of water with destroyers or other 'war
craft afloat, or a scene between decks on board
a battle-cruiser, or whether it is an intricate
maze of machinery in a shipyard—and it is
here, perhaps, that we seejthe artist in his most
characteristic vein—his eye and hand are always
equal to the occasion. It has been objected
that his drawings do not show us " war as it is,"
and it is true that those in search of the cruder
horrors of war will be disappointed, but, as
Capt. Montague remarks in his introduction,
where he deals especially with this question,
the best of his merits is " to have disengaged
from among this war's circumstances of horror
and suffering our Army's essential forces of
generous ardour and indestructible will." It
should be mentioned that there is a large folio
edition de luxe in which the drawings are repro-
duced on a much larger scale than in the two
volumes of the popular edition, hut in this, no
less than in the other, the quality of the repro-
ductions merits the highest praise.

English Church Woodwork: A Study in
Craftsmanship during the Medieval Period,
a.d. 1250-1550. By F. E. Howard and F. H.
Crossley. (London: B. T. Batsford, Ltd.)
30s. net.—On account of its illustrations alone
this volume is sure of a cordial welcome from
students of the ancient crafts of England, as
well as the modern craftsman, who has here
placed within his reach a rich storehouse of

material which cannot fail to excite his ad-
miration. Nearly four hundred of the illustra-
tions are from photographs, selected from
several thousands accumulated by Mr. Crossley
as the result of his visits to churches in all
parts of the country during a period of more
than twenty years, and there are, in addition,
some hundred and fifty measured drawings,
made chiefly by him and his colleague, Mr.
Howard. Grouped together in various cate-
gories according to their function and use as
part of the structure or decorative adjuncts of
the church, or as movable fittings, the examples
illustrated proclaim the beauty and diversity
of the heritage which the ancient worker in
wood has bequeathed to us—a heritage which,
in, spite of the many deductions that have
ensued from one or other cause in the meantime,
is still far from being meagre in quantity. As
j ust hinted, the material is dealt with according
to a functional classification and not topo-
graphically, but detailed indexes facilitate
speedy reference to the local sources from which
it has been drawn, and in this connexion it is
to be noted that the churches of East Anglia,
Devon, and Somerset have contributed a large
proportion. In the letterpress, for which, as for
the general plan of the book, Mr. Howard is
responsible, local characteristics are fully dealt
with and emphasized, and this is one of the
features of the book which make it particularly
valuable to the craftsman of the present day,
for as pointed out, many of the incongruities
which are to be found in the later woodwork of
numerous churches are due to ignorance of the
peculiarities which distinguished the craftsman-
ship of one part of the country from that of
another. And among other topics in Mr.
Howard's erudite dissertation which the worker
of to-day will find of interest is the application
of colour to woodwork in the mediaeval period
covered by the volume, of which there are still
extant some fine examples.

We have received from Messrs. Ken Hoshino
and Co., print publishers of Tokyo, through
their London office in Chancery Lane, some
specimens of the Japanese colour prints pub-
lished by them. These prints comprise a wide
range of subjects; they are all hand-printed from
wood-blocks on Japanese paper, and the prices
are very moderate. Suitably framed they are
admirably adapted for decorative purposes.