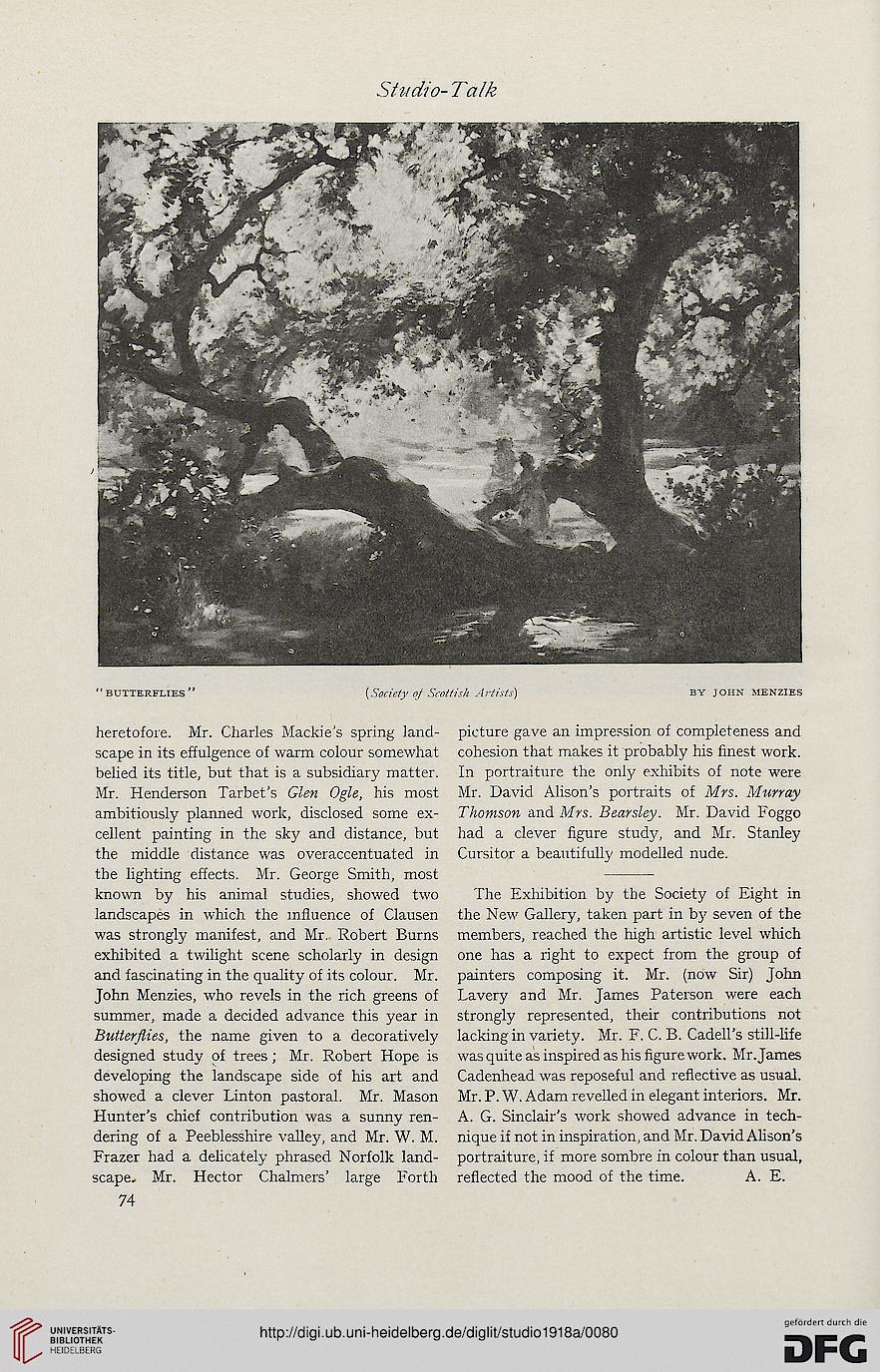 heretofore. Mr. Charles Mackie's spring land-
scape in its effulgence of warm colour somewhat
belied its title, but that is a subsidiary matter.
Mr. Henderson Tarbet's Glen Ogle, his most
ambitiously planned work, disclosed some ex-
cellent painting in the sky and distance, but
the middle distance was overaccentuated in
the lighting effects. Mr. George Smith, most
known by his animal studies, showed two
landscapes in which the influence of Clausen
was strongly manifest, and Mr. Robert Burns
exhibited a twilight scene scholarly in design
and fascinating in the quality of its colour. Mr.
John Menzies, who revels in the rich greens of
summer, made a decided advance this year in
Butterflies, the name given to a decoratively
designed study of trees; Mr. Robert Hope is
developing the landscape side of his art and
showed a clever Linton pastoral. Mr. Mason
Hunter's chief contribution was a sunny ren-
dering of a Peeblesshire valley, and Mr. W. M.
Frazer had a delicately phrased Norfolk land-
scape. Mr. Hector Chalmers' large Forth
74

picture gave an impression of completeness and
cohesion that makes it probably his finest work.
In portraiture the only exhibits of note were
Mr. David Alison's portraits of Mrs. Murray
Thomson and Mrs. Bearsley. Mr. David Foggo
had a clever figure study, and Mr. Stanley
Cursitor a beautifully modelled nude.

The Exhibition by the Society of Eight in
the New Gallery, taken part in by seven of the
members, reached the high artistic level which
one has a right to expect from the group of
painters composing it. Mr. (now Sir) John
Lavery and Mr. James Paterson were each
strongly represented, their contributions not
lacking in variety. Mr. F. C. B. Cadell's still-life
was quite as inspired as his figure work. Mr. James
Cadenhead was reposeful and reflective as usual.
Mr. P. W. Adam revelled in elegant interiors. Mr.
A. G. Sinclair's work showed advance in tech-
nique if not in inspiration, and Mr. David Alison's
portraiture, if more sombre in colour than usual,
reflected the mood of the time. A. E.