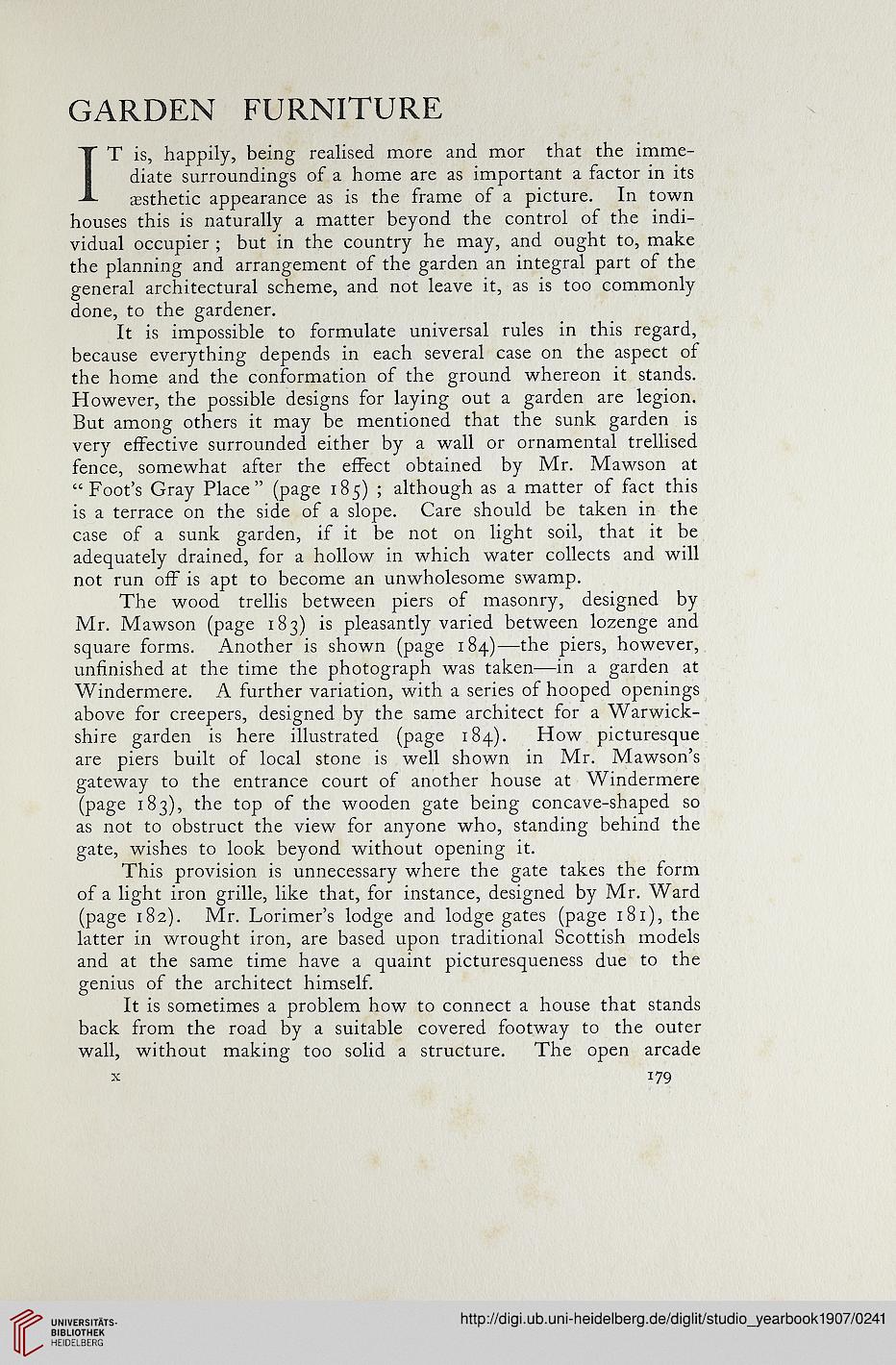 IT is, happily, being realised more and mor that the imme-
diate surroundings of a home are as important a factor in its
aesthetic appearance as is the frame of a picture. In town
houses this is naturally a matter beyond the control of the indi-
vidual occupier ; but in the country he may, and ought to, make
the planning and arrangement of the garden an integral part of the
general architectural scheme, and not leave it, as is too commonly
done, to the gardener.

It is impossible to formulate universal rules in this regard,
because everything depends in each several case on the aspect of
the home and the conformation of the ground whereon it stands.
However, the possible designs for laying out a garden are legion.
But among others it may be mentioned that the sunk garden is
very effective surrounded either by a wall or ornamental trellised
fence, somewhat after the effect obtained by Mr. Mawson at
“Foot’s Gray Place” (page 185) ; although as a matter of fact this
is a terrace on the side of a slope. Care should be taken in the
case of a sunk garden, if it be not on light soil, that it be
adequately drained, for a hollow in which water collects and will
not run off is apt to become an unwholesome swamp.

The wood trellis between piers of masonry, designed by
Mr. Mawson (page 183) is pleasantly varied between lozenge and
square forms. Another is shown (page 184)—the piers, however,
unfinished at the time the photograph was taken—in a garden at
Windermere. A further variation, with a series of hooped openings
above for creepers, designed by the same architect for a Warwick-
shire garden is here illustrated (page 184). How picturesque
are piers built of local stone is well shown in Mr. Mawson’s
gateway to the entrance court of another house at Windermere
(page 183), the top of the wooden gate being concave-shaped so
as not to obstruct the view for anyone who, standing behind the
gate, wishes to look beyond without opening it.

This provision is unnecessary where the gate takes the form
of a light iron grille, like that, for instance, designed by Mr. Ward
(page 182). Mr. Lorimer’s lodge and lodge gates (page 181), the
latter in wrought iron, are based upon traditional Scottish models
and at the same time have a quaint picturesqueness due to the
genius of the architect himself.

It is sometimes a problem how to connect a house that stands
back from the road by a suitable covered footway to the outer
wall, without making too solid a structure. The open arcade