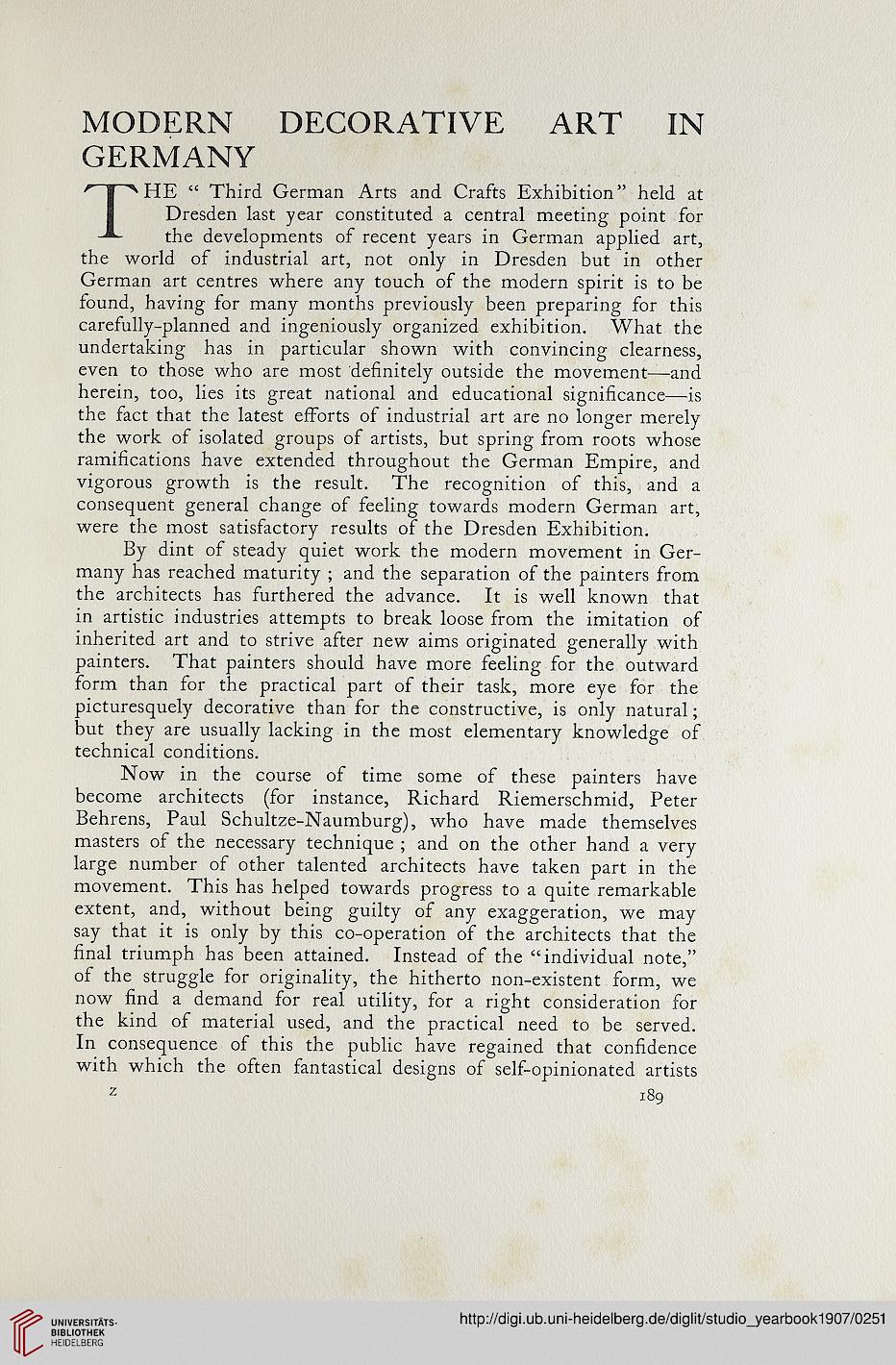 THE “ Third German Arts and Crafts Exhibition” held at
Dresden last year constituted a central meeting point for
the developments of recent years in German applied art,
the world of industrial art, not only in Dresden but in other
German art centres where any touch of the modern spirit is to be
found, having for many months previously been preparing for this
carefully-planned and ingeniously organized exhibition. What the
undertaking has in particular shown with convincing clearness,
even to those who are most definitely outside the movement—and
herein, too, lies its great national and educational significance—is
the fact that the latest efforts of industrial art are no longer merely
the work of isolated groups of artists, but spring from roots whose
ramifications have extended throughout the German Empire, and
vigorous growth is the result. The recognition of this, and a
consequent general change of feeling towards modern German art,
were the most satisfactory results of the Dresden Exhibition.

By dint of steady quiet work the modern movement in Ger-
many has reached maturity ; and the separation of the painters from
the architects has furthered the advance. It is well known that
in artistic industries attempts to break loose from the imitation of
inherited art and to strive after new aims originated generally with
painters. That painters should have more feeling for the outward
form than for the practical part of their task, more eye for the
picturesquely decorative than for the constructive, is only natural;
but they are usually lacking in the most elementary knowledge of
technical conditions.

Now in the course of time some of these painters have
become architects (for instance, Richard Riemerschmid, Peter
Behrens, Paul Schultze-Naumburg), who have made themselves
masters of the necessary technique ; and on the other hand a very
large number of other talented architects have taken part in the
movement. This has helped towards progress to a quite remarkable
extent, and, without being guilty of any exaggeration, we may
say that it is only by this co-operation of the architects that the
final triumph has been attained. Instead of the “individual note,”
of the struggle for originality, the hitherto non-existent form, we
now find a demand for real utility, for a right consideration for
the kind of material used, and the practical need to be served.
In consequence of this the public have regained that confidence
with which the often fantastical designs of self-opinionated artists
z 189