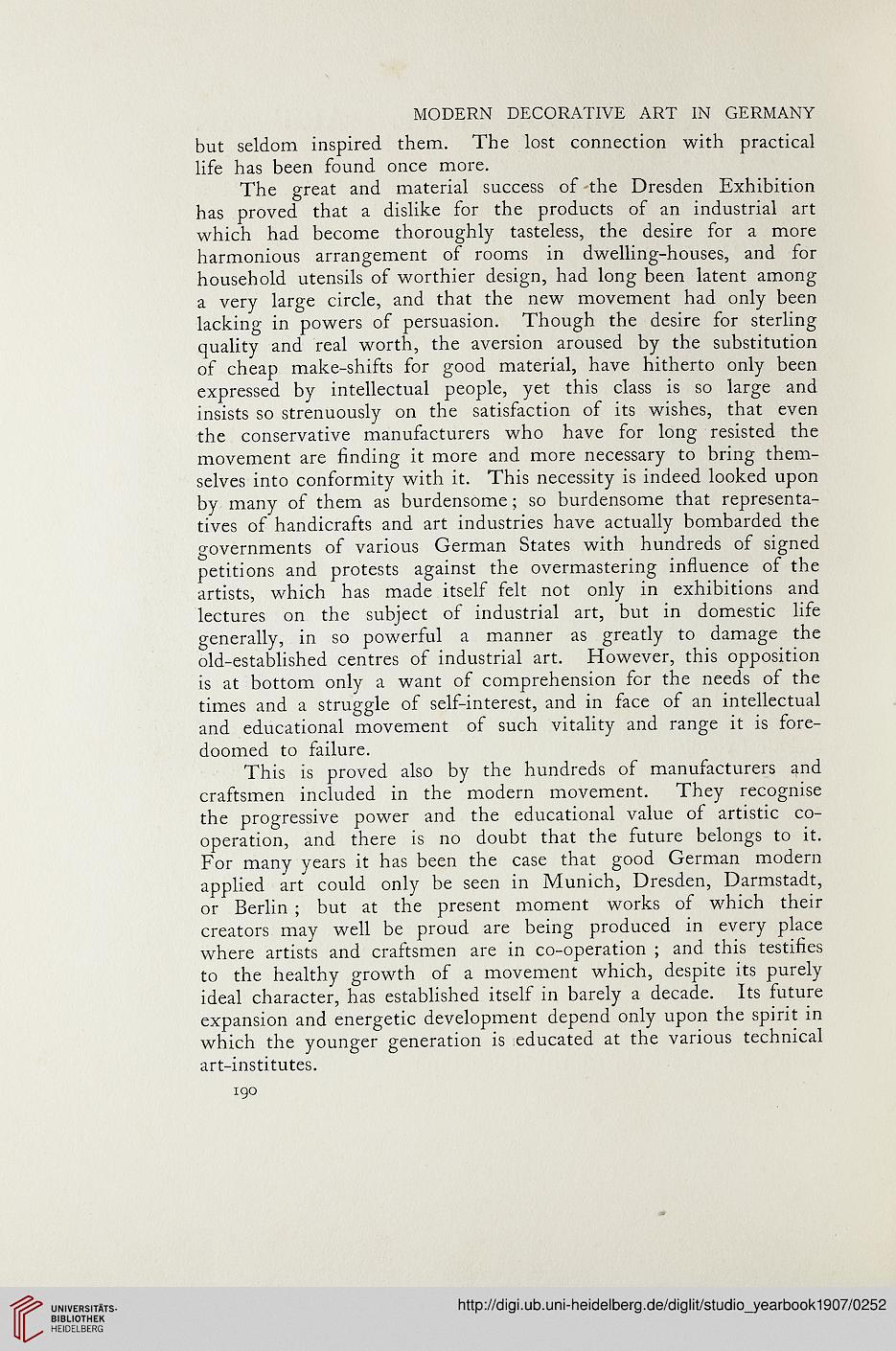 but seldom inspired them. The lost connection with practical
life has been found once more.

The great and material success of the Dresden Exhibition
has proved that a dislike for the products of an industrial art
which had become thoroughly tasteless, the desire for a more
harmonious arrangement of rooms in dwelling-houses, and for
household utensils of worthier design, had long been latent among
a very large circle, and that the new movement had only been
lacking in powers of persuasion. Though the desire for sterling
quality and real worth, the aversion aroused by the substitution
of cheap make-shifts for good material, have hitherto only been
expressed by intellectual people, yet this class is so large and
insists so strenuously on the satisfaction of its wishes, that even
the conservative manufacturers who have for long resisted the
movement are finding it more and more necessary to bring them-
selves into conformity with it. This necessity is indeed looked upon
by many of them as burdensome; so burdensome that representa-
tives of handicrafts and art industries have actually bombarded the
governments of various German States with hundreds of signed
petitions and protests against the overmastering influence of the
artists, which has made itself felt not only in exhibitions and
lectures on the subject of industrial art, but in domestic life
generally, in so powerful a manner as greatly to damage the
old-established centres of industrial art. However, this opposition
is at bottom only a want of comprehension for the needs of the
times and a struggle of self-interest, and in face of an intellectual
and educational movement of such vitality and range it is fore-
doomed to failure.

This is proved also by the hundreds of manufacturers and
craftsmen included in the modern movement. They recognise
the progressive power and the educational value of artistic co-
operation, and there is no doubt that the future belongs to it.
For many years it has been the case that good German modern
applied art could only be seen in Munich, Dresden, Darmstadt,
or Berlin ; but at the present moment works of which their
creators may well be proud are being produced in every place
where artists and craftsmen are in co-operation ; and this testifies
to the healthy growth of a movement which, despite its purely
ideal character, has established itself in barely a decade. Its future
expansion and energetic development depend only upon the spirit in
which the younger generation is educated at the various technical
art-institutes.