Vergilius Maro, Publius; Maillol, Aristide
The eclogues of Vergil: in the original Latin with an English prose translation — London, 1927 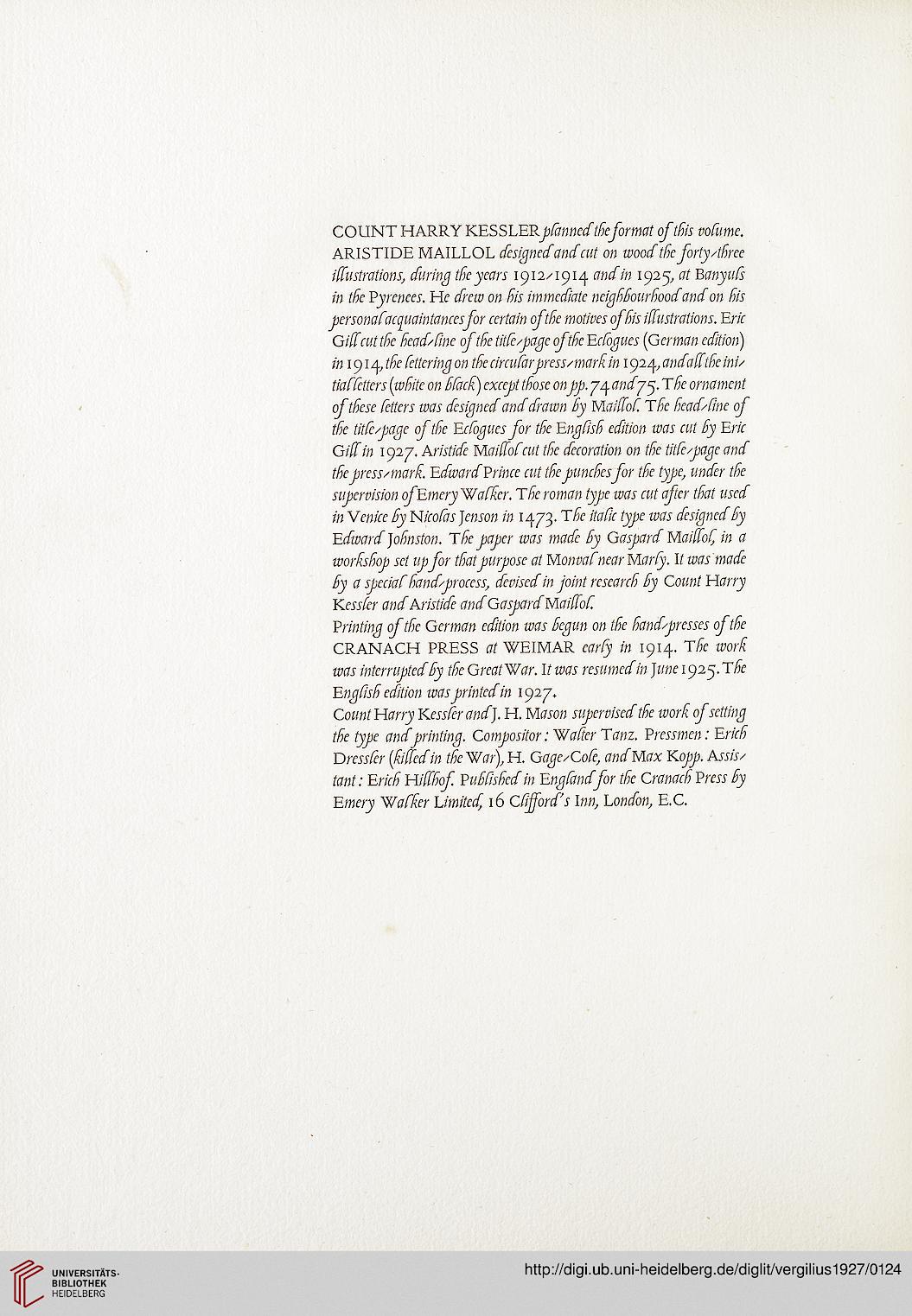 Information about OCR text
COUNT HARRY KESSLERplannedtheformat of this volume.
ARISTIDE MAILLOL designed and cut on wood the forty/dree
illustrations, during the years 1912/1914 and in 1929, at Banyuls
in de Pyrenees. He drew on His immediate neighbourhood and on his
personalaquaintancesfor certain of de motives of his illustrations. Eric
Giffcutthe head/Cine of the title/page ofthe Eclogues (German edition)
in 1914, the lettering on the circularpress/marlin 1924, andalithe ini/
tialletters (white on Slack) except those onpp. 74 andyy. The ornament
of these letters was designed and drawn by Maillol The head/line of
the title/page of the Eclogues for the English edition was cut by Eric
Gill in lysij. Aristide Maillol cut the decoration on the title/page and
the press/marl. EdwardPrince cut the punchesfor the type, under the
supervision of Emery Waller. The roman type was cut after that used
in Venice by Nicolas Jenson in 1473. The italic type was designedly
Edward Johnston. The paper was made by Gaspard Maillol, in a
workshop set upfor that purpose at Monvalnear Marly. It was made
by a special hand/process, devised in joint research by Count Harry
Kessler and Aristide and GaspardMaillol.
Printing of the German edition was begun on the hand/presses of the
CRANACH PRESS at WEIMAR early in 1914. The work
was interruptedly the Great War. It was resumedin June 1925. The
English edition was printed in 1927,
Count Harry Kessler andJ. H. Mason supervised the work of setting
the type andprinting. Compositor: Walter Tanz. Pressmen: Erich
Dressier (killed in the War), H. Gage /Cole, and Max Kopp. Assis/
tant: Erich Hillhof. Published in England for the Cranach Press by
Emery Walker Limited, 16 Clifford's Inn, London, E.C