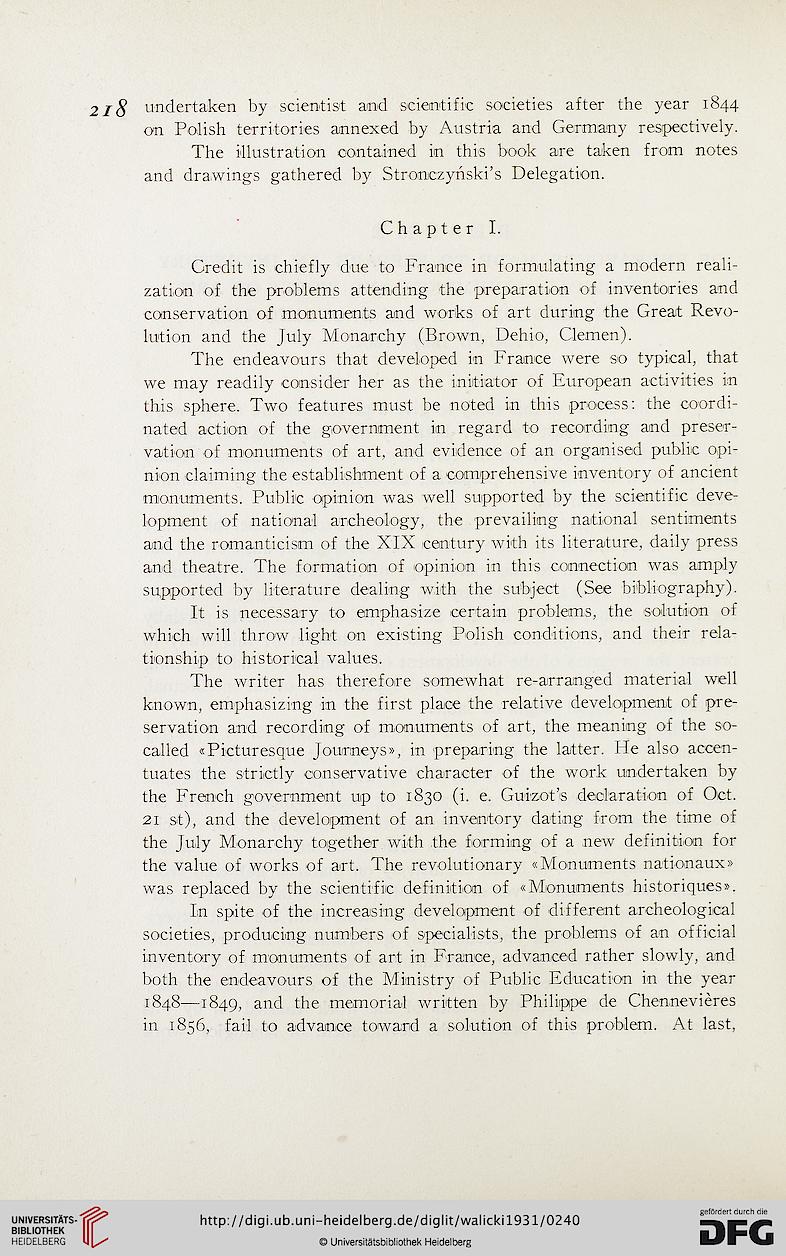 Information about OCR text
undertaken by scientist and scientific societies after the year 1844
on Polish territories annexed by Austria and Germany respectively.
The illustration contained in this book are taken from notes
and drawings gathered by Stronczynski's Delegation.
Chapter 1.
Credit is chiefly due to France in formulating a modern reali-
zation of the problems attending the preparation of inventories and
conservation of monuments and works of art during the Great Revo-
lution and the July Monarchy (Brown, Dehio, Clemen).
The endeavours that developed in France were so typical, that
we may readily consider her as the initiator of European activities in
this sphere. Two features must be noted in this process: the coordi-
nated action of the government in regard to recording and preser-
vation of monuments of art, and evidence of an organised public opi-
nion claiming the establishment of a comprehensive inventory of ancient
monuments. Public opinion was well supported by the scientific deve-
lopment of national archeology, the prevailing national sentiments
and the romanticism of the XIX century with its literature, daily press
and theatre. The formation of opinion in this connection was amply
supported by literature dealing with the subject (See bibliography).
It is necessary to emphasize certain problems, the solution of
which will throw light on existing Polish conditions, and their rela-
tionship to historical values.
The writer has therefore somewhat re-arranged material well
known, emphasizing in the first place the relative development of pre-
servation and recording of monuments of art, the meaning of the so-
called 3Picturesque Journeys», in preparing the latter. He also accen-
tuates the strictly conservative character of the work undertaken by
the French government up to 1830 (i. e. Guizot's declaration of Oct.
21 st), and the development of an inventory dating from the time of
the July Monarchy together with the forming of a new definition for
the value of works of art. The revolutionary «Monuments nationaux»
was replaced by the scientific definition of «Monuments historiques*.
In spite of the increasing development of different archeological
societies, producing numbers of specialists, the problems of an official
inventory of monuments of art in France, advanced rather slowly, and
both the endeavours of the Ministry of Public Education in the year
1848—1849, and the memorial written by Philippe de Chennevieres
in 1856, fail to advance toward a solution of this problem. At last,