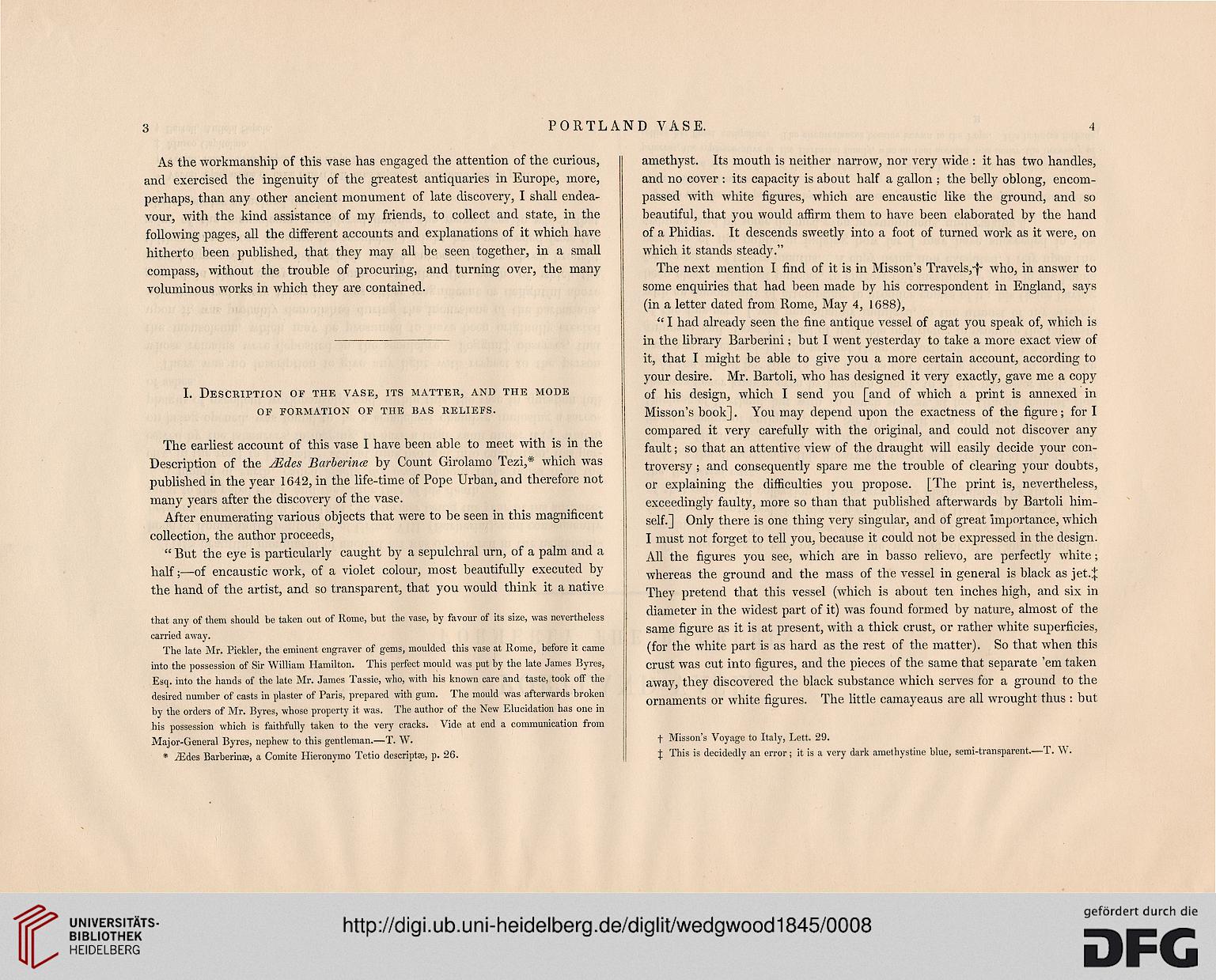 As the workmanship of this vase has engaged the attention of the curious,
and exercised the ingenuity of the greatest antiquaries in Europe, more,
perhaps, than any other ancient monument of late discovery, I shall endea-
vour, with the kind assistance of my friends, to collect and state, in the
following pages, all the different accounts and explanations of it which have
hitherto been published, that they may all be seen together, in a small
compass, without the trouble of procuring, and turning over, the many
voluminous works in which they are contained.

I. Description of the vase, its matter, and the mode
of formation of the bas reliefs.

The earliest account of this vase I have been able to meet with is in the
Description of the JEdes Barberince by Count Girolamo Tezi,* which was
published in the year 1642, in the life-time of Pope Urban, and therefore not
many years after the discovery of the vase.

After enumerating various objects that were to be seen in this magnificent
collection, the author proceeds,

" But the eye is particularly caught by a sepulchral urn, of a palm and a
half;—of encaustic work, of a violet colour, most beautifully executed by
the hand of the artist, and so transparent, that you would think it a native

that any of them should be taken out of Rome, but the vase, by favour of its size, was nevertheless
carried away.

The late Mr. Pickler, the eminent engraver of gems, moulded this vase at Rome, before it came
into the possession of Sir William Hamilton. This perfect mould was put by the late James Byres,
Esq. into the hands of the late Mr. James Tassie, who, with his known care and taste, took off the
desired number of casts in plaster of Paris, prepared with gum. The mould was afterwards broken
by the orders of Mr. Byres, whose property it was. The author of the New Elucidation has one in
his possession which is faithfully taken to the very cracks. Vide at end a communication from
Major-General Byres, nephew to this gentleman.—T. W.

amethyst. Its mouth is neither narrow, nor very wide : it has two handles,
and no cover : its capacity is about half a gallon : the belly oblong, encom-
passed with white figures, which are encaustic like the ground, and so
beautiful, that you would affirm them to have been elaborated by the hand
of a Phidias. It descends sweetly into a foot of turned work as it were, on
which it stands steady."

The next mention I find of it is in Misson's Travels,-^ who, in answer to
some enquiries that had been made by his correspondent in England, says
(in a letter dated from Rome, May 4, 1688),

" I had already seen the fine antique vessel of agat you speak of, which is
in the library Barberini; but I went yesterday to take a more exact view of
it, that I might be able to give you a more certain account, according to
your desire. Mr. Bartoli, who has designed it very exactly, gave me a copy
of his design, which I send you [and of which a print is annexed in
Misson's book]. You may depend upon the exactness of the figure; for I
compared it very carefully with the original, and could not discover any
fault; so that an attentive view of the draught will easily decide your con-
troversy ; and consequently spare me the trouble of clearing your doubts,
or explaining the difficulties you propose. [The print is, nevertheless,
exceedingly faulty, more so than that published afterwards by Bartoli him-
self.] Only there is one thing very singular, and of great importance, which
I must not forget to tell you, because it could not be expressed in the design.
All the figures you see, which are in basso relievo, are perfectly white;
whereas the ground and the mass of the vessel in general is black as jet.:};
They pretend that this vessel (which is about ten inches high, and six in
diameter in the widest part of it) was found formed by nature, almost of the
same figure as it is at present, with a thick crust, or rather white superficies,
(for the white part is as hard as the rest of the matter). So that when this
crust was cut into figures, and the pieces of the same that separate 'em taken
away, they discovered the black substance which serves for a ground to the
ornaments or white figures. The little camayeaus are all wrought thus : but

J This is decidedly an error; it is a very dark amethystine blue, semi-transparent.—T. W.