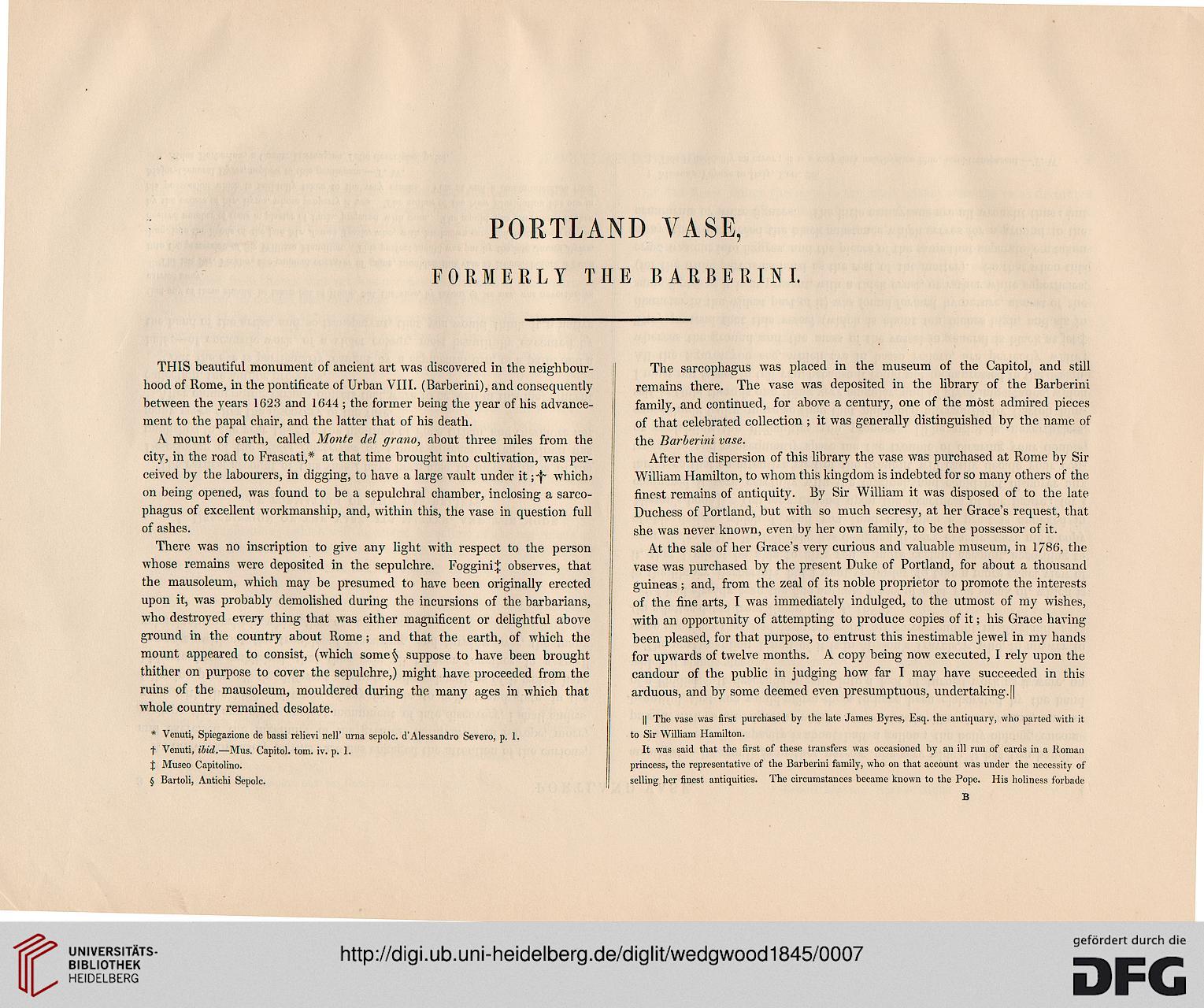 THIS beautiful monument of ancient art was discovered in the neighbour-
hood of Rome, in the pontificate of Urban VIII. (Barberini), and consequently
between the years 1623 and 1644 ; the former being the year of his advance-
ment to the papal chair, and the latter that of his death.

A mount of earth, called Monte del grano, about three miles from the
city, in the road to Frascati,* at that time brought into cultivation, was per-
ceived by the labourers, in digging, to have a large vault under it ;-f~ which>
on being opened, was found to be a sepulchral chamber, inclosing a sarco-
phagus of excellent workmanship, and, within this, the vase in question full
of ashes.

There was no inscription to give any light with respect to the person
whose remains were deposited in the sepulchre. Foggini^ observes, that
the mausoleum, which may be presumed to have been originally erected
upon it, was probably demolished during the incursions of the barbarians,
who destroyed every thing that was either magnificent or delightful above
ground in the country about Rome ; and that the earth, of which the
mount appeared to consist, (which some§ suppose to have been brought
thither on purpose to cover the sepulchre,) might have proceeded from the
ruins of the mausoleum, mouldered during the many ages in which that
whole country remained desolate.

The sarcophagus was placed in the museum of the Capitol, and still
remains there. The vase was deposited in the library of the Barberini
family, and continued, for above a century, one of the most admired pieces
of that celebrated collection ; it was generally distinguished by the name of
the Barberini vase.

After the dispersion of this library the vase was purchased at Rome by Sir
William Hamilton, to whom this kingdom is indebted for so many others of the
finest remains of antiquity. By Sir William it was disposed of to the late
Duchess of Portland, but with so much secresy, at her Grace's request, that
she was never known, even by her own family, to be the possessor of it.

At the sale of her Grace's very curious and valuable museum, in 1/86, the
vase was purchased by the present Duke of Portland, for about a thousand
guineas ; and, from the zeal of its noble proprietor to promote the interests
of the fine arts, I was immediately indulged, to the utmost of my wishes,
with an opportunity of attempting to produce copies of it; his Grace having
been pleased, for that purpose, to entrust this inestimable jewel in my hands
for upwards of twelve months. A copy being now executed, I rely upon the
candour of the public in judging how far I may have succeeded in this
arduous, and by some deemed even presumptuous, undertaking.||

|| The vase was first purchased by the late James Byres, Esq. the antiquary, who parted with it
to Sir William Hamilton.

It was said that the first of these transfers was occasioned by an ill run of cards in a Roman
princess, the representative of the Barberini family, who on that account was under the necessity of
selling her finest antiquities. The circumstances became known to the Pope. His holiness forbade