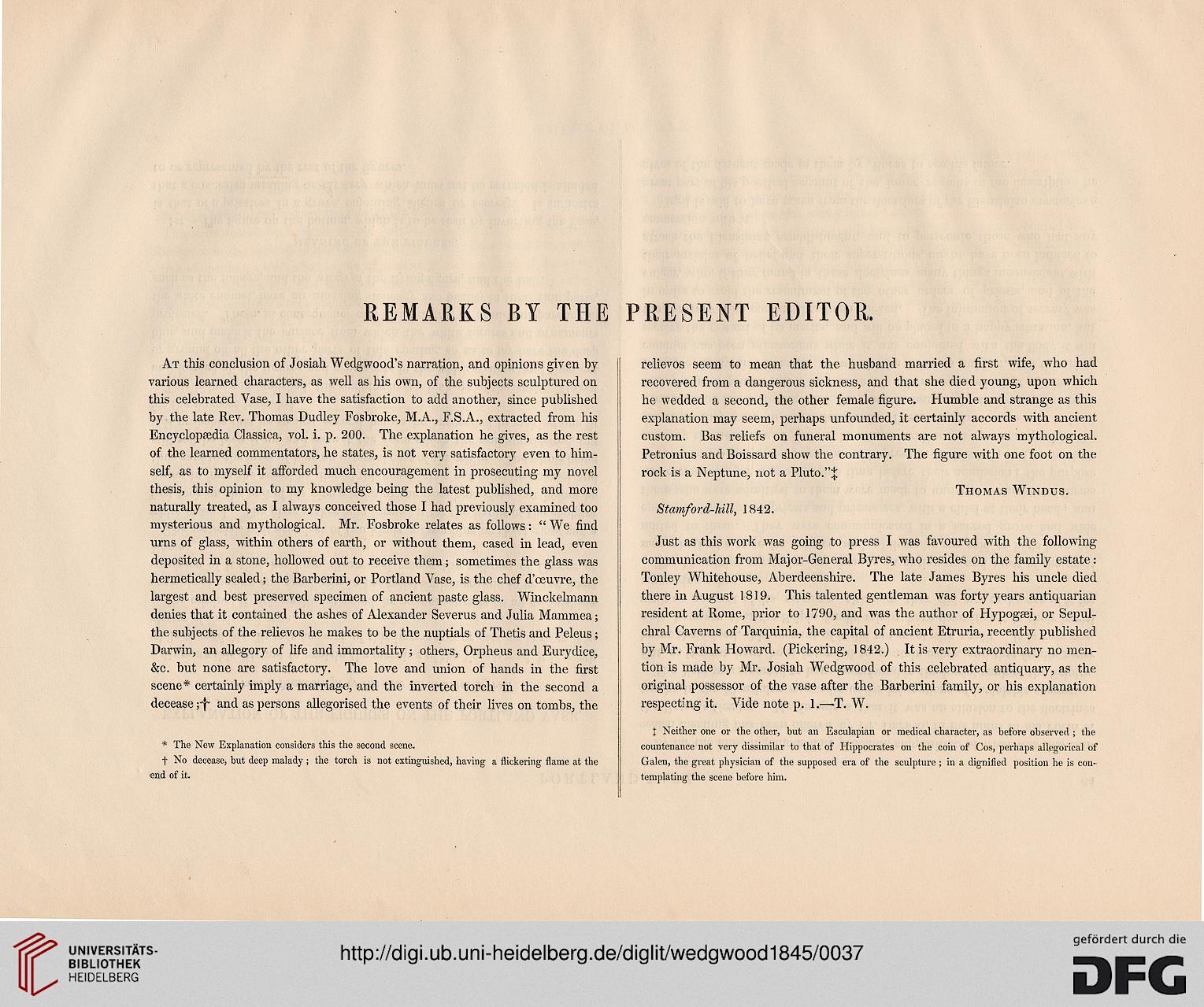 Information about OCR text
REMARKS BY THE PRESENT EDITOR.

At this conclusion of Josiah Wedgwood's narration, and opinions given by
various learned characters, as well as his own, of the subjects sculptured on
this celebrated Vase, I have the satisfaction to add another, since published
by the late Rev. Thomas Dudley Fosbroke, M.A., F.S.A., extracted from his
Encyclopaedia Classica, vol. i. p. 200. The explanation he gives, as the rest
of the learned commentators, he states, is not very satisfactory even to him-
self, as to myself it afforded much encouragement in prosecuting my novel
thesis, this opinion to my knowledge being the latest published, and more
naturally treated, as I always conceived those I had previously examined too
mysterious and mythological. Mr. Fosbroke relates as follows: " We find
urns of glass, within others of earth, or without them, cased in lead, even
deposited in a stone, hollowed out to receive them; sometimes the glass was
hermetically sealed; the Barberini, or Portland Vase, is the chef d'ceuvre, the
largest and best preserved specimen of ancient paste glass. Winckelmann
denies that it contained the ashes of Alexander Severus and Julia Mammea;
the subjects of the relievos he makes to be the nuptials of Thetis and Peleus;
Darwin, an allegory of life and immortality ; others, Orpheus and Eurydice,
&c. but none are satisfactory. The love and union of hands in the first
scene* certainly imply a marriage, and the inverted torch in the second a
decease ;-f- and as persons allegorised the events of their lives on tombs, the

* The New Explanation considers this the second scene.

f No decease, but deep malady ; the torch is not extinguished, having a flickering flame at the
end of it.

relievos seem to mean that the husband married a first wife, who had
recovered from a dangerous sickness, and that she died young, upon which
he wedded a second, the other female figure. Humble and strange as this
explanation may seem, perhaps unfounded, it certainly accords with ancient
custom. Bas reliefs on funeral monuments are not always mythological.
Petronius and Boissard show the contrary. The figure with one foot on the
rock is a Neptune, not a Pluto."^

Just as this work was going to press I was favoured with the following
communication from Major-General Byres, who resides on the family estate:
Tonley Whitehouse, Aberdeenshire. The late James Byres his uncle died
there in August 1819. This talented gentleman was forty years antiquarian
resident at Rome, prior to 1790, and was the author of Hypogsei, or Sepul-
chral Caverns of Tarquinia, the capital of ancient Etruria, recently published
by Mr. Frank Howard. (Pickering, 1842.) It is very extraordinary no men-
tion is made by Mr. Josiah Wedgwood of this celebrated antiquary, as the
original possessor of the vase after the Barberini family, or his explanation
respecting it. Vide note p. 1.—T. W.

X Neither one or the other, but an Esculapian or medical character, as before observed ; the
countenance not very dissimilar to that of Hippocrates on the coin of Cos, perhaps allegorical of
Galen, the great physician of the supposed era of the sculpture ; in a dignified position he is con-
templating the scene before him.