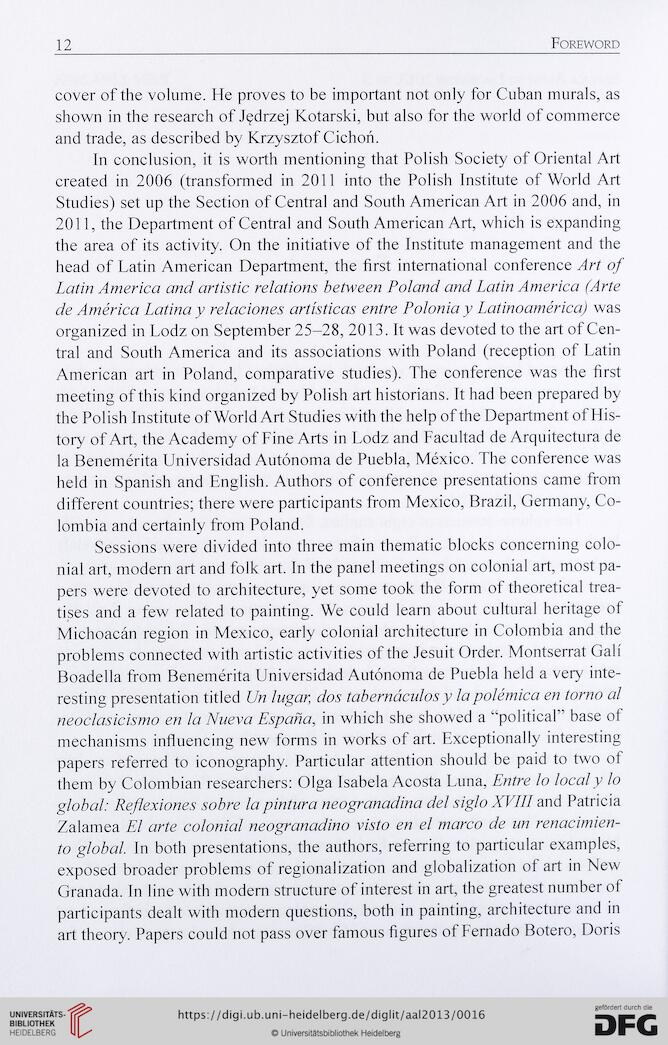 cover of the volume. He proves to be important not only for Cuban murals, as
shown in the research of Jędrzej Kotarski, but also for the world of commerce
and trade, as described by Krzysztof Cichoń.

In conclusion, it is worth mentioning that Polish Society of Oriental Art
created in 2006 (transformed in 2011 into the Polish Institute of World Art
Studies) set up the Section of Central and South American Art in 2006 and, in
2011, the Department of Central and South American Art, which is expanding
the area of its activity. On the initiative of the Institute management and the
head of Latin American Department, the first international conference Art of
Latin America and artistic relations between Poland and Latin America (Arte
de América Latina y relaciones artísticas entre Polonia y Latinoamérica) was
organized in Lodz on September 25-28, 2013. It was devoted to the art of Cen-
tral and South America and its associations with Poland (reception of Latin
American art in Poland, comparative studies). The conference was the first
meeting of this kind organized by Polish art historians. It had been prepared by
the Polish Institute of World Art Studies with the help of the Department of His-
tory of Art, the Academy of Fine Arts in Lodz and Facultad de Arquitectura de
la Benemérita Universidad Autónoma de Puebla, México. The conference was
held in Spanish and English. Authors of conference presentations came from
different countries; there were participants from Mexico, Brazil, Germany, Co-
lombia and certainly from Poland.

Sessions were divided into three main thematic blocks concerning colo-
nial art, modern art and folk art. In the panel meetings on colonial art, most pa-
pers were devoted to architecture, yet some took the form of theoretical trea-
tises and a few related to painting. We could learn about cultural heritage of
Michoacán region in Mexico, early colonial architecture in Colombia and the
problems connected with artistic activities of the Jesuit Order. Montserrat Galí
Boadella from Benemérita Universidad Autónoma de Puebla held a very inte-
resting presentation titled Un Zugar, dos tabernáculos y la polémica en torno al
neoclasicismo en la Nueva España, in which she showed a “political” base of
mechanisms influencing new forms in works of art. Exceptionally interesting
papers referred to iconography. Particular attention should be paid to two of
them by Colombian researchers: Olga Isabela Acosta Luna, Entre lo local y lo
global: Reflexiones sobre la pintura neogranadina del siglo XV1II and Patricia
Zalamea El arte colonial neogranadino visto en el marco de un renacimien-
to global. In both presentations, the authors, referring to particular examples,
exposed broader problems of regionalization and globalization of art in New
Granada. In line with modern structure of interest in art, the greatest number of
participants dealt with modern questions, both in painting, architecture and in
art theory. Papers could not pass over famous figures of Fernado Botero, Doris