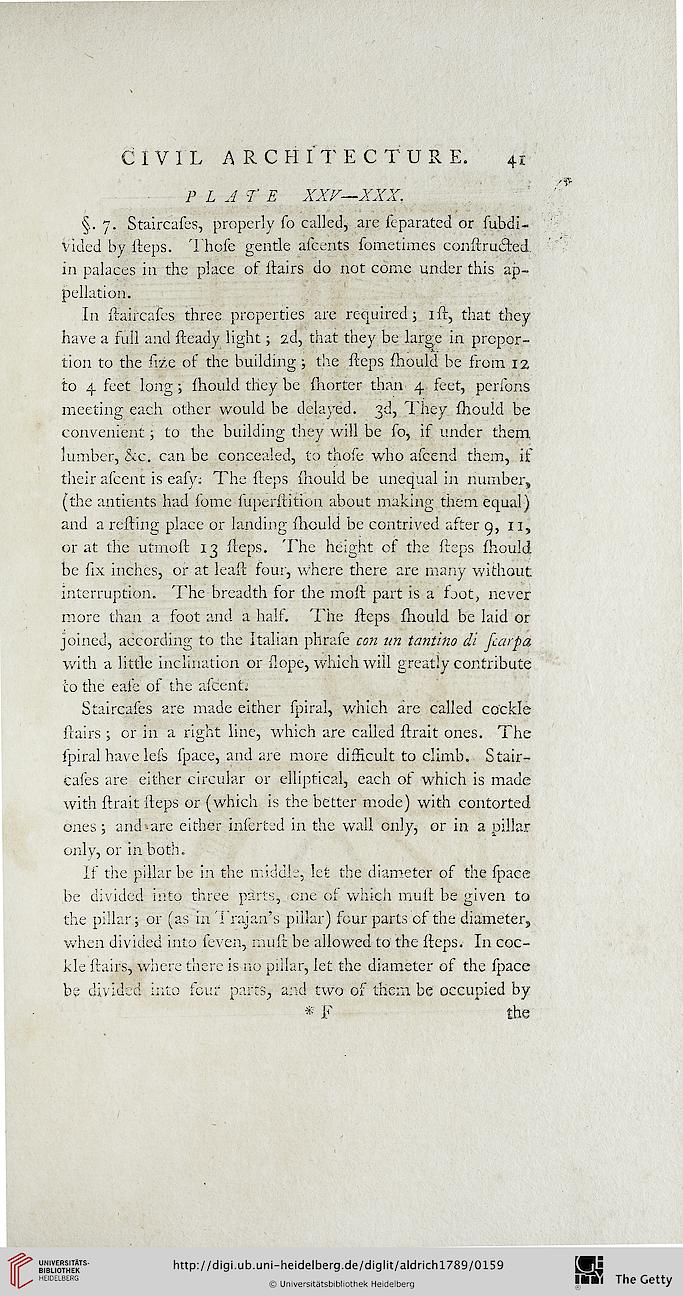 PLATE XXV—XXX.
§.7. Staircases, properly so called, are separated or subdi-
Vided by Heps. Those gentle ascents sometimes construdted.
in palaces in the place of flairs do not come under this ap-
pellation.
In ftaircases three properties are required; ist, that they
have a sull and steady light; 2d, that they be large in propor-
tion to the size of the building; the steps should be from 12
to 4 feet long; should they be shorter than 4 feet, persons
meeting each other would be delayed. 3d, They should be
convenient; to the building they will be so, if under them
lumber, &c. can be concealed, to those who ascend them, if
their alcent is easy; The steps should be unequal in number,
(the antients had some superstition about making them equal)
and a refling place or landing should be contrived after 9, 11,
or at the utmosl 13 steps. The height of the steps should.
be six inches, or at least four, where there are many without
interruption. The breadth for the raost part is a foot, never
more than a foot and a half. The steps should be laid or
joined, according to the Italian phrase con nn tantino dl fear pa
with a little inclination or Hope, which will greatly contribute
to the ease os the asdenti
Staircases are made either spiral, which are called cockle
slairs ; or in a right line, which are called strait ones. The
spiral have less space, and are more difficult to climb. Stair-
cases are either circular or elliptical, each of which is made
with strait steps or (which is the better mode) with contorted
ones; and>are either inserted in the wall only, or in a pillar
only, or in both.
If the pillar be in the middle, let the diameter of the space
he divided into three parts, cne of which mult be given to
the pillar; or (as in Trajan’s pillar) four parts of the diameter,
when divided into seven, must be allowed to the steps. In coc-
kle srairs, where there is no pillar, let the diameter os the space
be divided into four parts, and two os them be occupied by
* F the