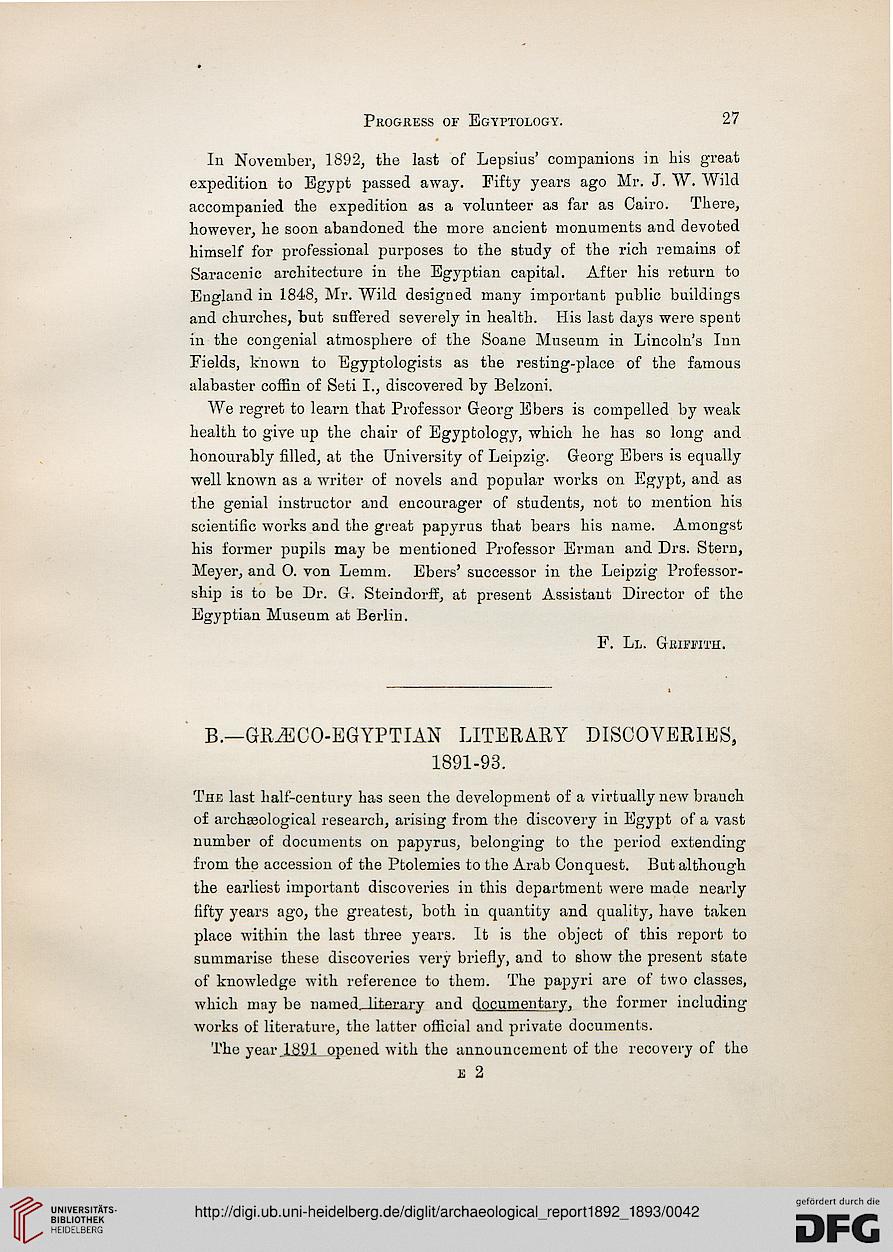 In November, 1892, the last of Lepsius' companions in his great
expedition to Egypt passed away. Fifty years ago Mr. J. W. Wild
accompanied the expedition as a volunteer as far as Cairo. There,
however, he soon abandoned the more ancient monuments and devoted
himself for professional purposes to the study of the rich remains of
Saracenic architecture in the Egyptian capital. After his return to
England in 1848, Mr. Wild designed many important public buildings
and churches, but suffered severely in health. His last days were spent
in the congenial atmosphere of the Soane Museum in Lincoln's Inn
Fields, known to Egyptologists as the resting-place of the famous
alabaster coffin of Seti I., discovered by Belzoni.

We regret to learn that Professor Georg Ebers is compelled by weak
health to give up the chair of Egyptology, which he has so long and
honourably filled, at the University of Leipzig. Georg Ebers is equally
well known as a writer of novels and popular works on Egypt, and as
the genial instructor and encourager of students, not to mention his
scientific works and the great papyrus that bears his name. Amongst
his former pupils may be mentioned Professor Erman and Drs. Stern,
Meyer, and O. von Lemm. Ebers' successor in the Leipzig Professor-
ship is to be Dr. G. Steindorff, at present Assistant Director of the
Egyptian Museum at Berlin.

The last half-century has seen the development of a virtually new branch
of archaeological research, arising from the discovery in Egypt of a vast
number of documents on papyrus, belonging to the period extending
from the accession of the Ptolemies to the Arab Conquest. But although
the earliest important discoveries in this department were made nearly
fifty years ago, the greatest, both in quantity and quality, have taken
place within the last three years. It is the object of this report to
summarise these discoveries very briefly, and to show the present state
of knowledge with reference to them. The papyri are of two classes,
which may be named, literary and documentary, the former including
works of literature, the latter official and private documents.