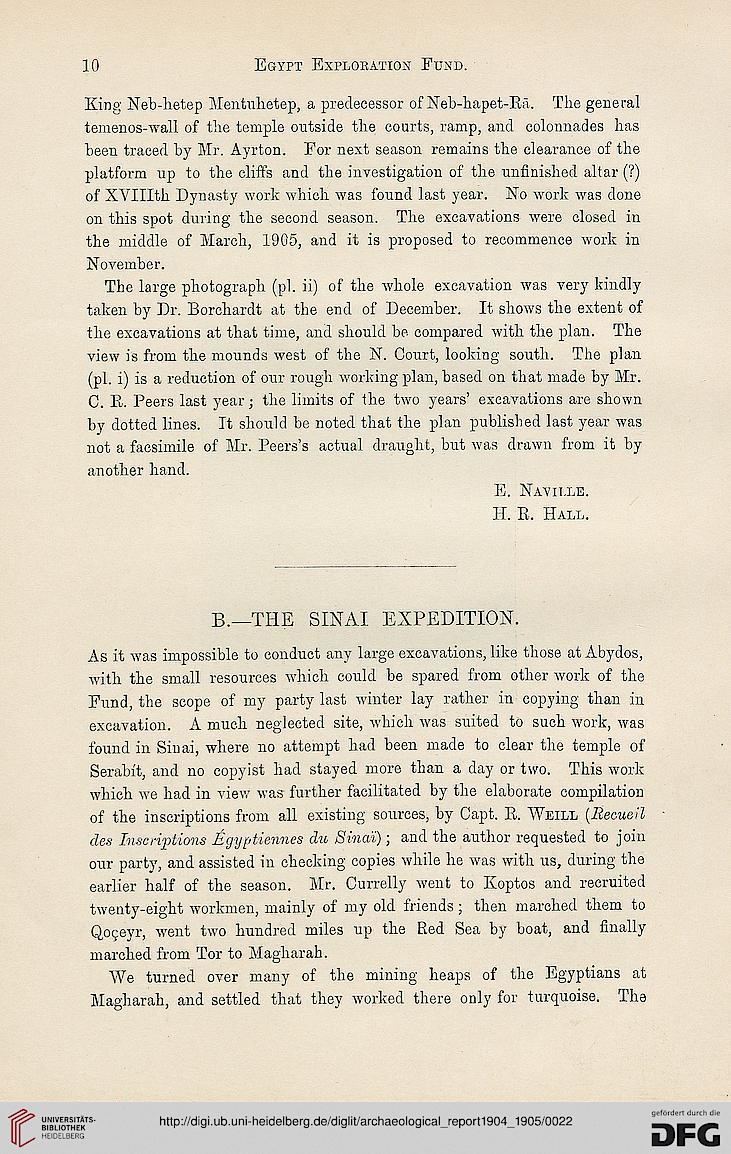 King Neb-hetep Mentuhetep, a predecessor of Neb-hapet-Ba. The general
temenos-wall of the temple outside the courts, ramp, and colonnades has
been traced by Mr. Ayrton. For next season remains the clearance of the
platform up to the cliffs and the investigation of the unfinished altar (?)
of XVIIIth Dynasty work which was found last year. No work was done
on this spot during the second season. The excavations were closed in
the middle of March, 1905, and it is proposed to recommence work in
November.

The large photograph (pi. ii) of the whole excavation was very kindly
taken by Dr. Borchardt at the end of December. It shows the extent of
the excavations at that time, and should be compared with the plan. The
view is from the mounds west of the N. Court, looking south. The plan
(pi. i) is a reduction of our rough working plan, based on that made by Mr.
C. B. Peers last year; the limits of the two years' excavations are shown
by dotted lines. It should be noted that the plan published last year was
not a facsimile of Mr. Peers's actual draught, but was drawn from it by
another hand.

As it was impossible to conduct any large excavations, like those at Abydos,
with the small resources which could be spared from other work of the
Fund, the scope of my party last winter lay rather in copying than in
excavation. A much neglected site, which was suited to such work, was
found in Sinai, where no attempt had been made to clear the temple of
Serabft, and no copyist had stayed more than a day or two. This work
which we had in view was further facilitated by the elaborate compilation
of the inscriptions from all existing sources, by Capt. B. Weill (Eecueil
des Insertions Egyptiennes du Sinai); and the author requested to join
our party, and assisted in checking copies while he was with us, during the
earlier half of the season. Mr. Cnrrelly went to Koptos and recruited
twenty-eight workmen, mainly of my old friends; then marched them to
Qoceyr, went two hundred miles up the Red Sea by boat, and finally
inarched from Tor to Magharah.

We turned over many of the mining heaps of the Egyptians at
Magharah, and settled that they worked there only for turquoise. The