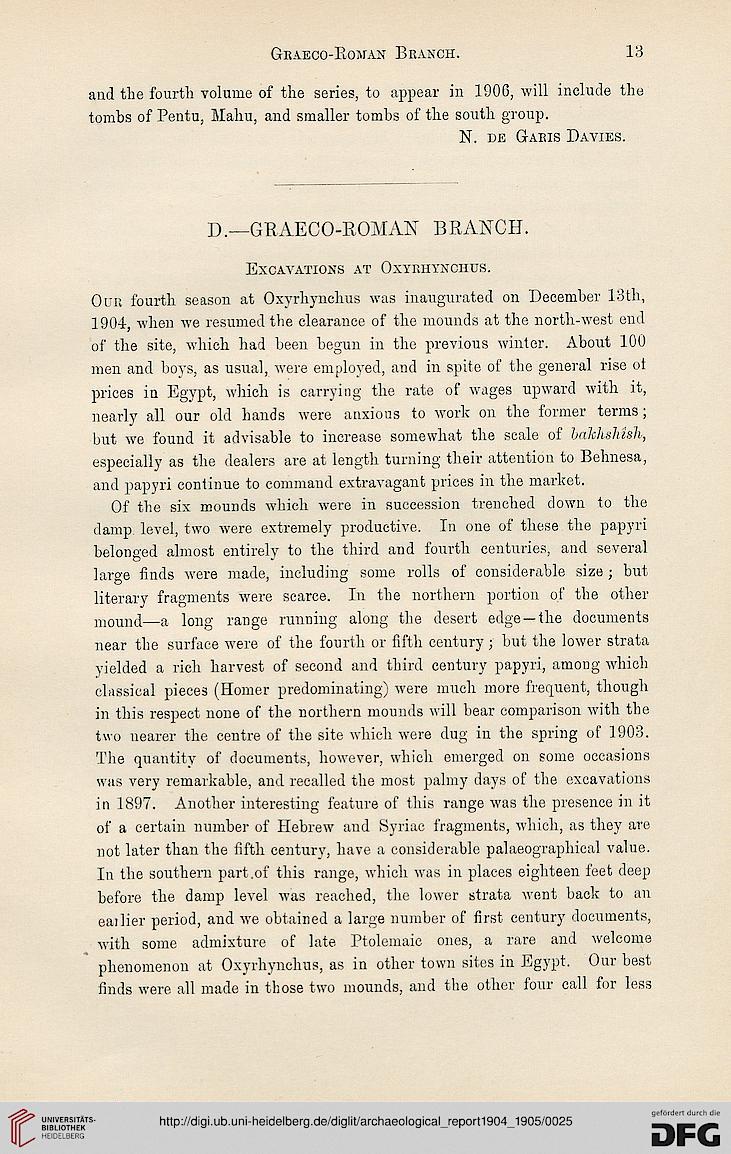 and the fourth volume of the series, to appear in 190G, will include the
tombs of Pentu, Mahu, and smaller tombs of the south group.

Our fourth season at Oxyrhynciius was inaugurated on December 13th,
1904, when we resumed tbe clearance of the mounds at the north-west end
of the site, which had been begun in the previous winter. About 100
men and boys, as usual, were employed, and in spite of the general rise ot
prices in Egypt, which is carrying the rate of wages upward with it,
nearly all our old hands were anxious to work on the former terms;
but we found it advisable to increase somewhat the scale of bahhsMsh,
especially as the dealers are at length turning their attention to Behnesa,
and papyri continue to command extravagant prices in the market.

Of the six mounds which were in succession trenched down to the
damp level, two were extremely productive. In one of these the papyri
belonged almost entirely to the third and fourth centuries, and several
large finds were made, including some rolls of considerable size; but
literary fragments were scarce. In the northern portion of the other
mound—a long range running along the desert edge —the documents
near the surface were of the fourth or fifth century ; but the lower strata
yielded a rich harvest of second and third century papyri, among which
classical pieces (Homer predominating) were much more frequent, though
in this respect none of the northern mounds will bear comparison with the
two nearer the centre of the site which were dug in the spring of 1903.
The quantity of documents, however, which emerged on some occasions
was very remarkable, and recalled the most palmy days of the excavations
in 1897. Another interesting feature of this range was the presence in it
of a certain number of Hebrew and Syriac fragments, which, as they are
not later than the fifth century, have a considerable palaeographical value.
In the southern part .of this range, which was in places eighteen feet deep
before the damp level was reached, the lower strata went back to an
eailier period, and we obtained a large number of first century documents,
with some admixture of late Ptolemaic ones, a rare and welcome
phenomenon at Oxyrhynciius, as in other town sites in Egypt. Our best
finds were all made in those two mounds, and the other four call for less