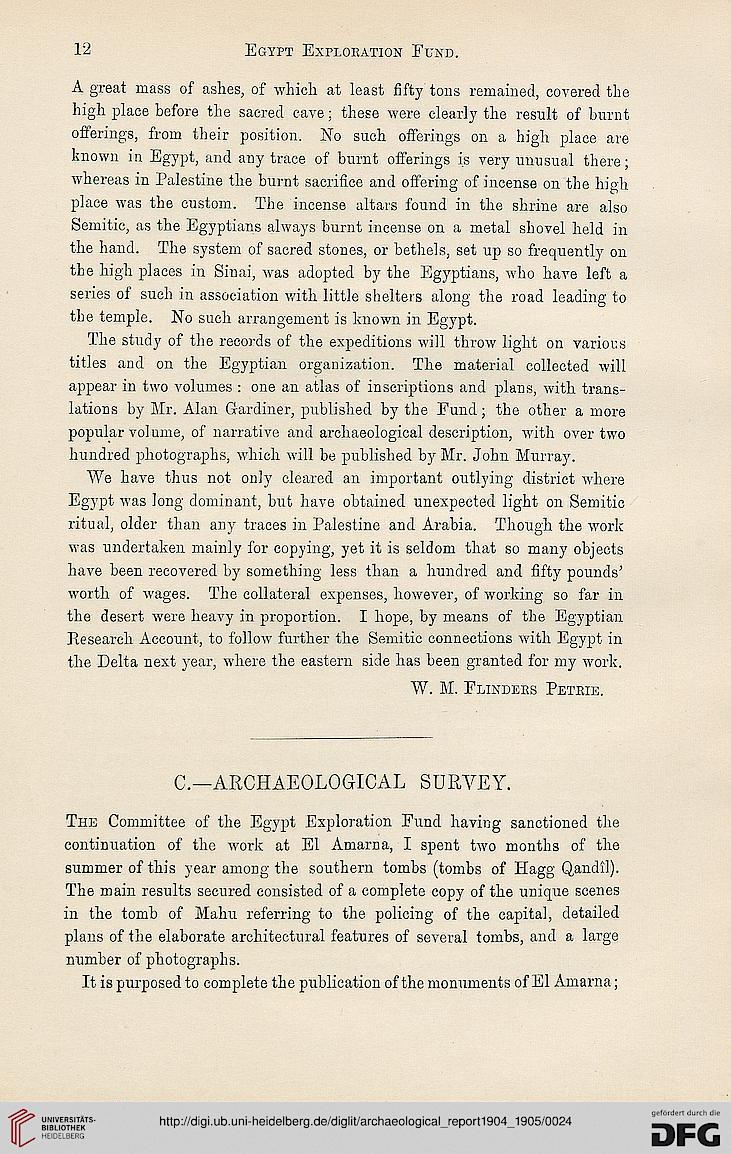 A great mass of ashes, of which at least fifty tons remained, covered the
high place before the sacred cave; these were clearly the result of burnt
offerings, from their position. jSto such offerings on a high place are
known in Egypt, and any trace of burnt offerings is very unusual there;
whereas in Palestine the burnt sacrifice and offering of incense on the high
place was the custom. The incense altars found in the shrine are also
Semitic, as the Egyptians always burnt incense on a metal shovel held in
the hand. The system of sacred stones, or bethels, set up so frequently on
the high places in Sinai, was adopted by the Egyptians, who have left a
series of such in association with little shelters along the road leading to
the temple. No such arrangement is known in Egypt.

The study of the records of the expeditions will throw light on various
titles and on the Egyptian organization. The material collected will
appear in two volumes : one an atlas of inscriptions and plans, with trans-
lations by Mr. Alan Gardiner, published by the Eund; the other a more
popular volume, of narrative and archaeological description, with over two
hundred photographs, which will be published by Mr. John Murray.

We have thus not only cleared an important outlying district where
Egypt was long dominant, but have obtained unexpected light on Semitic
ritual, older than any traces in Palestine and Arabia. Though the work
was undertaken mainly for copying, yet it is seldom that so many objects
have been recovered by something less than a hundred and fifty pounds'
worth of wages. The collateral expenses, however, of working so far in
the desert were heavy in proportion. I hope, by means of the Egyptian
Research Account, to follow further the Semitic connections with Egypt in
the Delta next year, where the eastern side has been granted for my work.

The Committee of the Egypt Exploration Fund having sanctioned the
continuation of the work at El Amarna, I spent two months of the
summer of this year among the southern tombs (tombs of Hagg Qandil).
The main results secured consisted of a complete copy of the unique scenes
in the tomb of Mahu referring to the policing of the capital, detailed
plans of the elaborate architectural features of several tombs, and a large
number of photographs.
It is purposed to complete the publication of the monuments of El Amarna;