Facsimile
Note: This is an additional scan to display the colour reference chart and scalebar.
0.5
1 cm 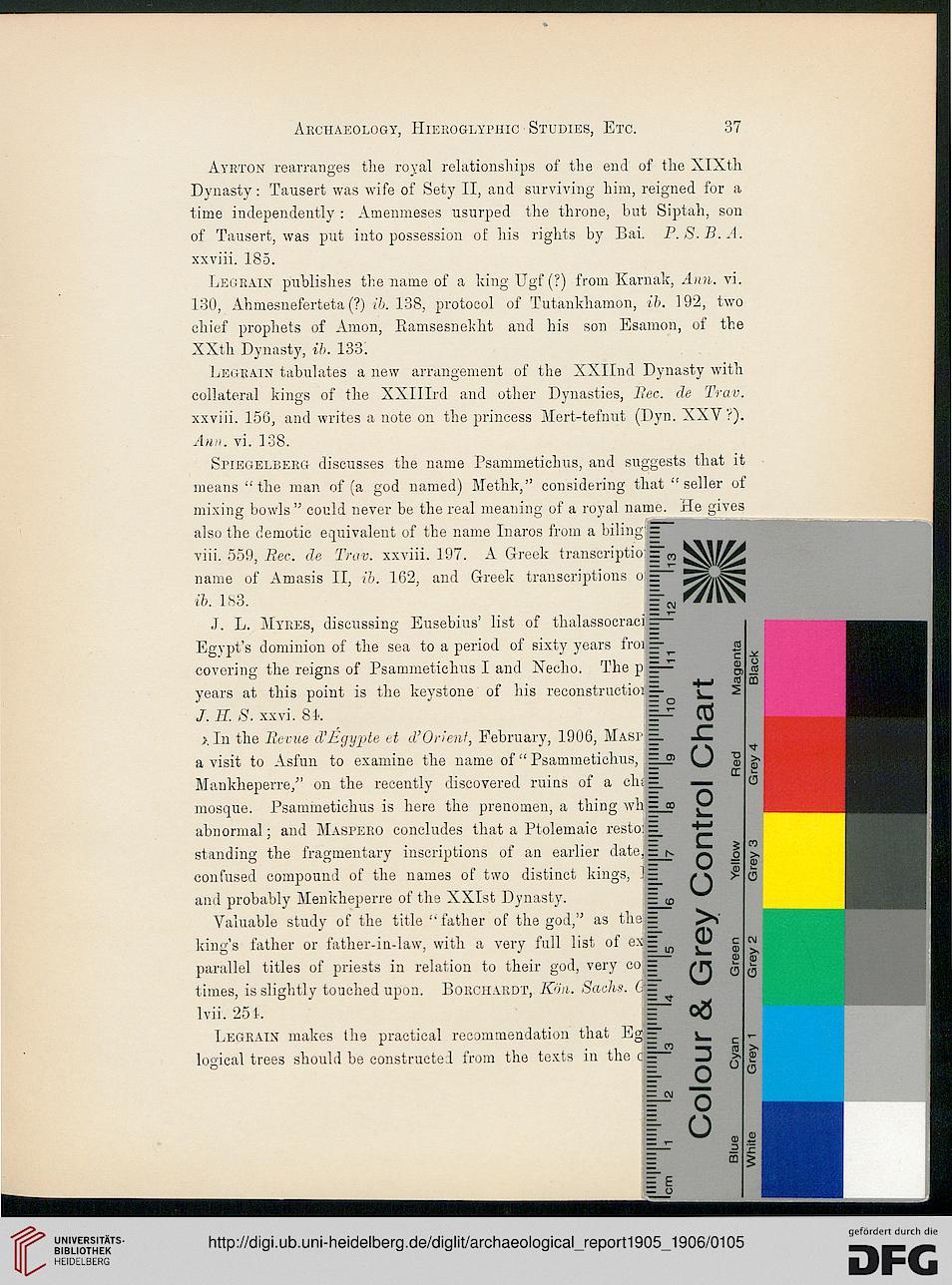 Ayrton rearranges the royal relationships of the end of the XlXth
Dynasty: Tausert was wife of Sety II, and surviving him, reigned for a
time independently : Amenmeses usurped the throne, but Siptah, son
of Tausert, was put into possession of his rights by Bai. P.S.B.A.
xxviii. 185.

Legrain tabulates a new arrangement of the XXIInd Dynasty with
collateral kings of the XXIIIrd and other Dynasties, Bee. de Trav.
xxviii. 150, and writes a note on the princess Mert-tefnut (Dyn. XXV?).
Ann. vi. 138.

Spiegelberg discusses the name Psammetichus, and suggests that it
means "the man of (a god named) Methk," considering that "seller of
mixing bowls" could never be the real meaning of a royal name. He gives
also the demotic equivalent of the name Inaros from a biling -
viii. 559, Bee. de Trav. xxviii. 197. A Greek transcriptio:ETn ^^jjjj^
name of Amasis II, ib. 162, and Greek transcriptions oE
ib. 1S3.

.1. L. Myees, discussing Eusebius' list of thalassocraci E—
Egypt's dominion of the sea to a period of sixty years froiE-^_
covering the reigns of Psammetichus I and Necho. The p E-^ g,
years at this point is the keystone of his reconstructioi E-
/. H. 8. xxvi. 84. |J? 03

>. In the Revue d'JSgypte et d'Orient, February, 1906, Mast E. £2
a visit to Asfun to examine the name of" Psammetichus, E_2> 0
Mankheperre/' on the recently discovered ruins of a clu=. —
mosque. Psammetichus is here the prenomen, a thing wh = co o
abnormal; and Maspero concludes that a Ptolemaic resto:E_ +^
standing the fragmentary inscriptions of an earlier date,En q
confused compound of the names of two distinct kings, !=_ /n
and probably Menkheperre of the XXIst Dynasty. = ^ ^"^

Valuable study of the title " father of the god," as the-g:
king's father or father-in-law, with a very full list of exE m ^
parallel titles of priests in relation to their god, very co sj
times, is slightly touched upon. BoECHARDT, K'hi. S<o:lt*. 1 -
lvii. 251. 0#

Legrain makes the practical recommendation that Eg=" i_