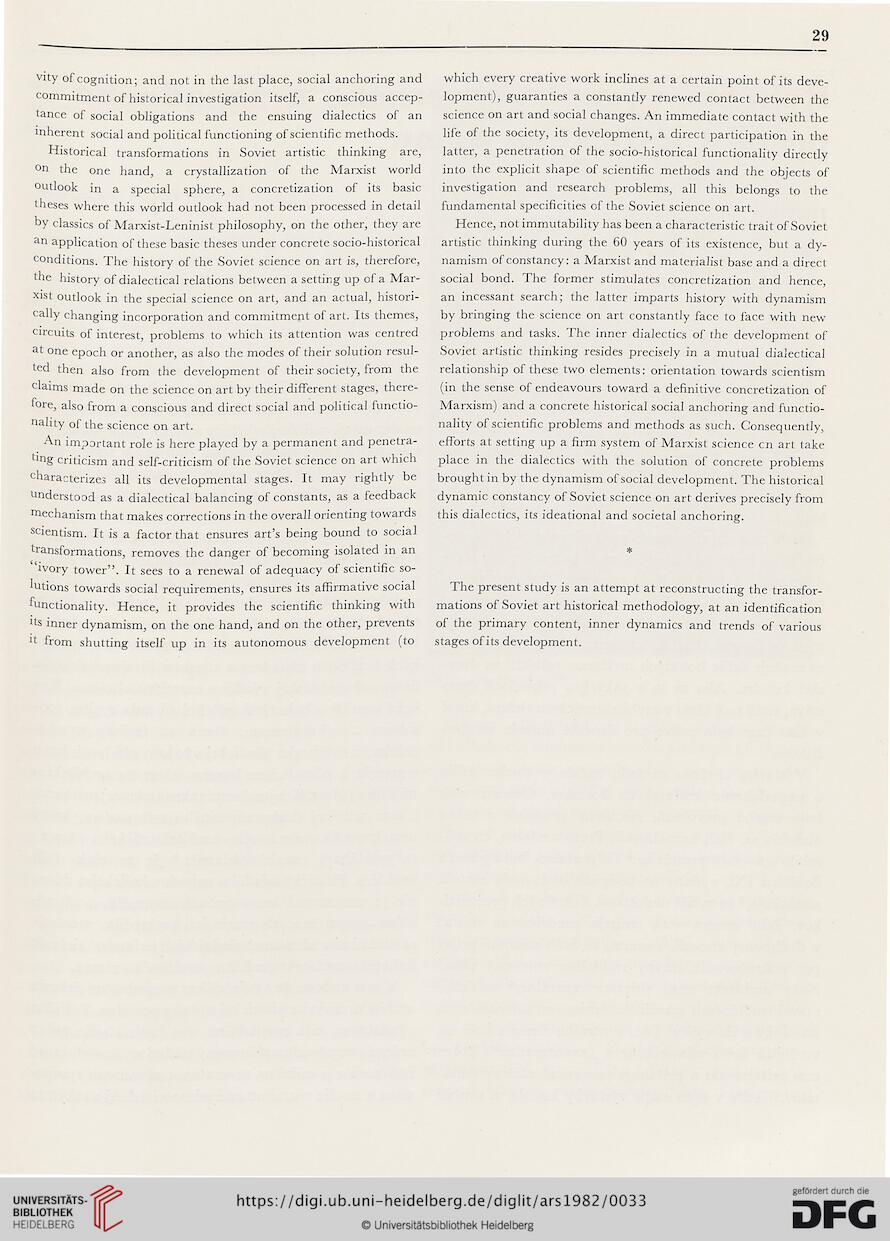 vity of cognition; and not in the last place, social anchoring and
commitment of historical investigation itself, a conscious accep-
tance of social obligations and the ensuing dialectics of an
inherent social and political functioning ofscientific methods.
Historical transformations in Soviet artistic thinking are,
on the one hand, a crystallization of the Marxist world
outlook in a special sphere, a concretization of its basic
theses where this world outlook had not been processed in detail
by classics of Marxist-Leninist philosophy, on the other, they are
an application of these basic theses under concrète socio-historical
conditions. The history of the Soviet science on art is, therefore,
the history of dialectical relations between a setting up of a Mar-
xist outlook in the special science on art, and an actual, histori-
cally changing incorporation and commitment of art. Its thèmes,
circuits of interest, problems to which its attention was centred
at one epoch or another, as also the modes of their solution resul-
ted then also from the development of their society, from the
Claims made on the science on art by their different stages, there-
fore, also from a conscious and direct social and political functio-
nality of the science on art.
An important role is here played by a permanent and penetra-
üng criticism and self-criticism of the Soviet science on art which
characterizes ail its developmental stages. It may rightly be
understood as a dialectical balancing of constants, as a feedback
Hiechanism that makes corrections in the overall orienting towards
scientism. It is a factor that ensures art’s being bound to social
transformations, removes the danger of becoming isolated in an
ivory tower”. It sees to a renewal of adequacy of scientific so-
lutions towards social requirements, ensures its affirmative social
functionality. Hence, it provides the scientific thinking with
its inner dynamism, on the one hand, and on the other, prevents
it from shutting itself up in its autonomous development (to

which every Creative work inclines at a certain point of its deve-
lopment), guaranties a constantly renewed contact between the
science on art and social changes. An immédiate contact with the
life of the society, its development, a direct participation in the
latter, a pénétration of the socio-historical functionality directly
into the explicit shape of scientific methods and the objects of
investigation and research problems, ail this belongs to the
fundamental specificities of the Soviet science on art.
Hence, not immutability has been a characteristic trait of Soviet
artistic thinking during the 60 years of its existence, but a dy-
namism of constancy : a Marxist and materialist base and a direct
social bond. The former stimulâtes concretization and hence,
an incessant search; the latter imparts history with dynamism
by bringing the science on art constantly face to face with new
problems and tasks. The inner dialectics of the development of
Soviet artistic thinking résides precisely in a mutual dialectical
relationship of these two éléments: orientation towards scientism
(in the sense of endeavours toward a definitive concretization of
Marxism) and a concrète historical social anchoring and functio-
nality of scientific problems and methods as such. Consequently,
efforts at setting up a firm systém of Marxist science en art take
place in the dialectics with the solution of concrète problems
brought in by the dynamism of social development. The historical
dynamic constancy of Soviet science on art dérivés precisely from
this dialectics, its ideational and sociétal anchoring.
*
The present study is an attempt at reconstructing the transfor-
mations of Soviet art historical methodology, at an identification
of the primary content, inner dynamics and trends of various
stages ofits development.