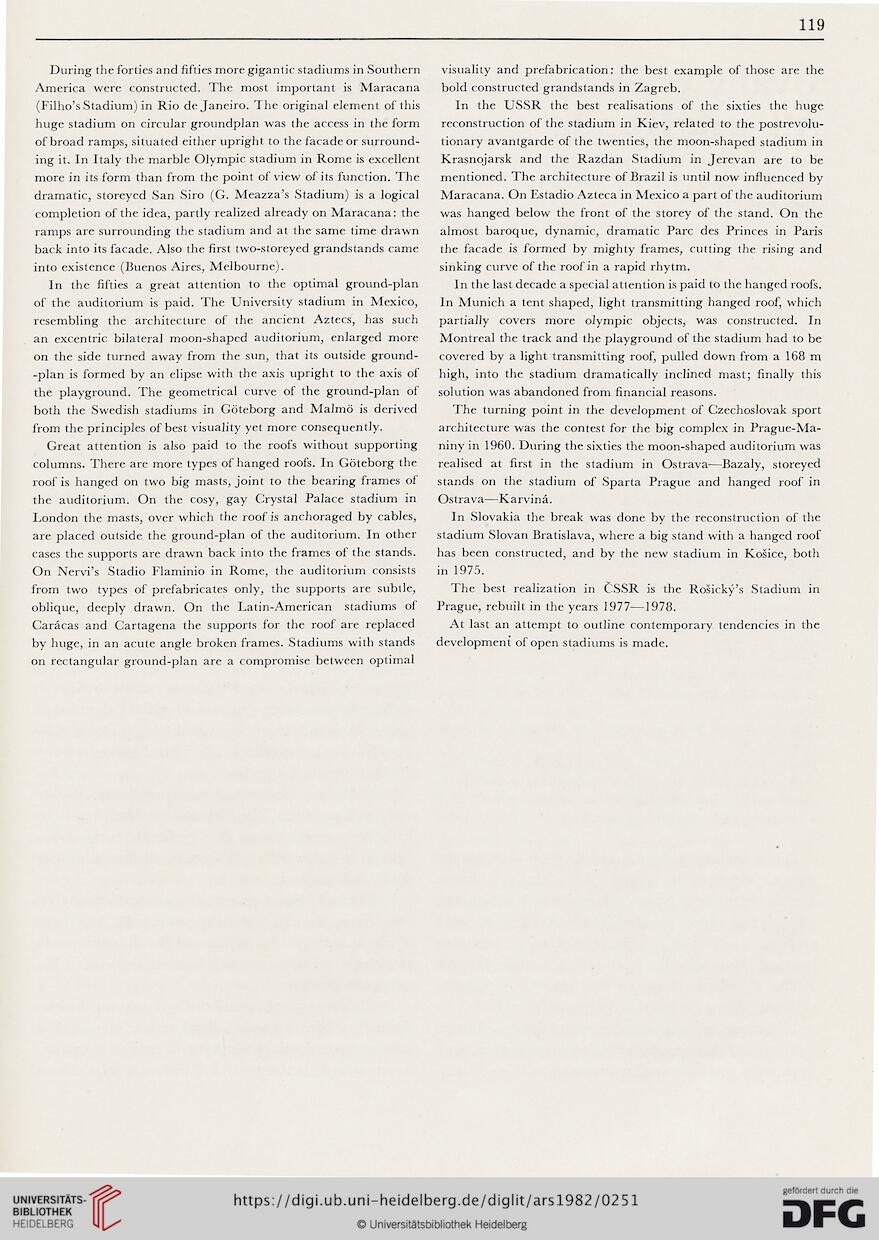 Düring the forties and fifties more gigantic Stadiums in Southern
America were constructed. The most important is Maracana
(Filho’s Stadium) in Rio de Janeiro. The original element of this
huge stadium on circular groundplan was the access in the form
of broad ramps, situated either upright to the façade or surround-
ing it. In Italy the marble Olympic stadium in Rome is excellent
more in its form than from the point of view of its fonction. The
dramatic, storeyed San Siro (G. Meazza’s Stadium) is a logical
completion of the idea, partly realized already on Maracana: the
ramps are surrounding the stadium and at the same time drawn
back into its façade. Also the first two-storeyed grandstands came
into existence (Buenos Aires, Melbourne).
In the fifties a great attention to the optimal ground-plan
of the auditorium is paid. The University stadium in Mexico,
resembling the architecture of the ancient Aztecs, has such
an excentric bilateral moon-shaped auditorium, enlarged more
on the side turned away from the sun, that its outside ground-
-plan is formed by an elipse with the axis upright to the axis of
the playground. The geometrical curve of the ground-plan of
both the Swedish Stadiums in Göteborg and Malmö is derived
from the principles of best visuality yet more consequently.
Great attention is also paid to the roofs without supporting
columns. There arc more types of hanged roofs. In Göteborg the
roof is hanged on two big masts, joint to the bearing frames of
the auditorium. On the cosy, gay Crystal Palace stadium in
London the masts, over which the roof is anchoraged by cables,
are placed outside the ground-plan of the auditorium. In other
cases the supports are drawn back into the frames of the stands.
On Nervi’s Stadio Flaminio in Rome, the auditorium consists
from two types of prefabricates only, the supports are subtle,
oblique, deeply drawn. On the Latin-American Stadiums of
Carácas and Cartagena the supports for the roof are replaced
by huge, in an acute angle broken frames. Stadiums with stands
on rectangular ground-plan are a compromise between optimal

visuality and préfabrication: the best example of those are the
bold constructed grandstands in Zagreb.
In the USSR the best réalisations of the sixties the huge
reconstruction of the stadium in Kiev, related to the postrevolu-
tionary avantgardě of the twenties, the moon-shaped stadium in
Krasnojarsk and the Razdan Stadium in Jerevan are to be
mentioned. The architecture of Brazil is until now influenced by
Maracana. On Estadio Azteca in Mexico a part of the auditorium
was hanged below the front of the storey of the stand. On the
almost baroque, dynamic, dramatic Parc des Princes in Paris
the façade is formed by mighty frames, cutting the rising and
sinking curve of the roof in a rapid rhytm.
In the last decade a special attention is paid to the hanged roofs.
In Munich a tent shaped, light transmitting hanged roof, which
partially covers more olympic objects, was constructed. In
Montreal the track and the playground of the stadium had to be
covered by a light transmitting roof, pulled down from a 168 m
high, into the stadium dramatically inclined mast; finally this
solution was abandoned from financial reasons.
The turning point in the development of Czechoslovak sport
architecture was the contest for the big complex in Prague-Ma-
niny in 1960. Düring the sixties the moon-shaped auditorium was
realised at first in the stadium in Ostrava-—Bazaly, storeyed
stands on the stadium of Sparta Prague and hanged roof in
Ostrava—Karviná.
In Slovakia the break was donc by the reconstruction of the
stadium Slovan Bratislava, where a big stand with a hanged roof
has been constructed, and by the new stadium in Košice, both
in 1975.
The best realization in ČSSR is the Rosickÿ’s Stadium in
Prague, rebuilt in the years 1977—1978.
At last an attempt to outline Contemporary tendencies in the
development of open Stadiums is made.