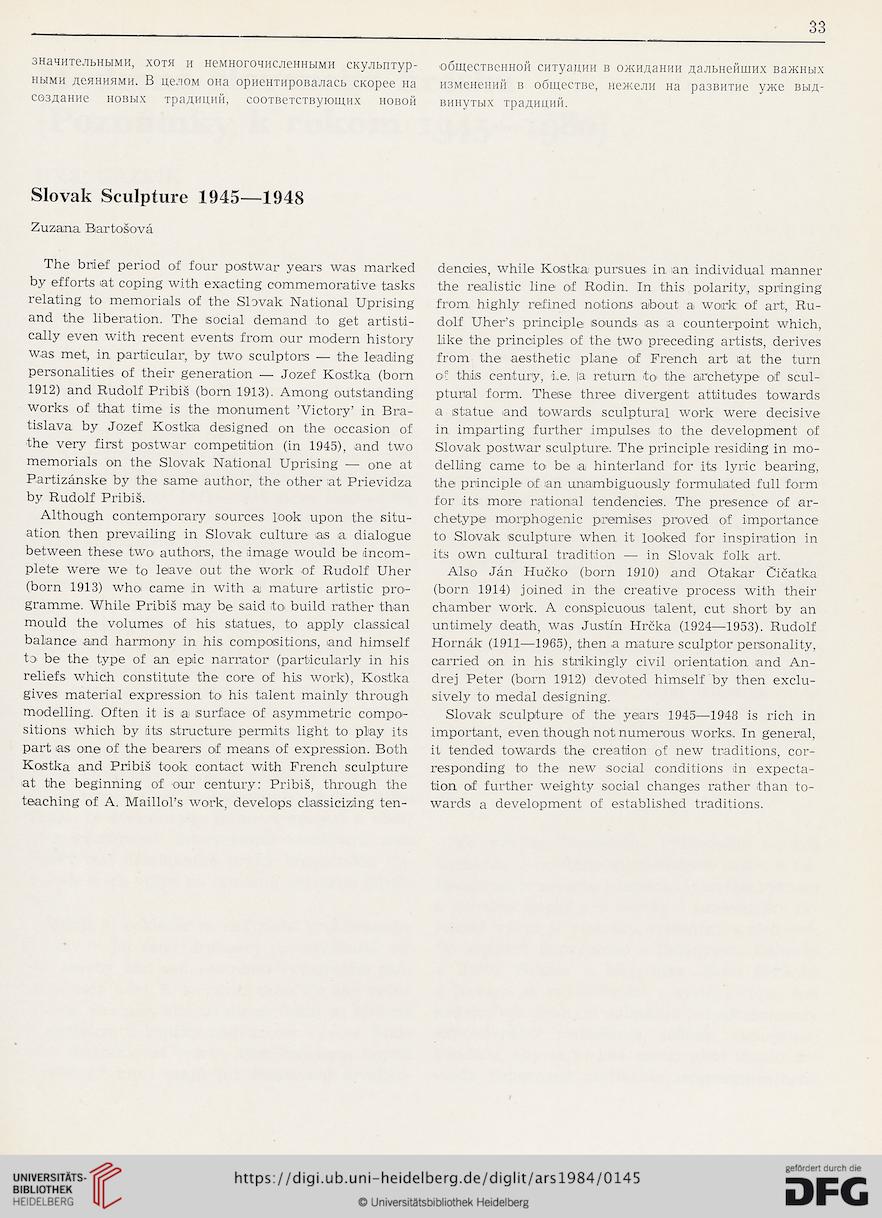 Slovák Sculpture 1945—1948
Zuzana Bartošová
The brief period of four postwar years was marked
by efforts iat coping with exacting commémorative tasks
relating to memorials of the Slovák National Uprising
and the libération. The social demand to get artisti-
cally even with recent events from our modern history
was met, in particular, by two sculptons — the leading
Personalities of their génération — Jozef Kostka (bom
1912) and Rudolf Pribiš (bom 1913). Among outstanding
Works of that time is the monument 'Victory’ in Bra-
tislava by Jozef Kostka deisigned on the occasion of
the very first postwar compétition (in 1945), and two
memorials on the Slovák National Uprising — one at
Partizánske by the same author, the other lat Prievidza
by Rudolf Pribiš.
Although contemporary sources look upon the situ-
ation then prevailing in Slovák culture as a dialogue
between these two authors, the limage would be incom-
plète were we to leave out the work of Rudolf Uher
(born 1913) who came in with a mature artistic pro-
gramme. While Pribiš may be said to build rather than
mould the volumes of his statues, to apply classical
balance and harmony in his compositions, and himself
to be the type of an epic narrator (particularly in his
reliefs which constitute the core of his work), Kostka
gives material expression to his talent mainly through
modelling. Often it is a surface of asymmetric compo-
sitions which by lits structure permits light to play its
part as one of the bearers of means- of expression. Both
Kostka and Pribiš took contact with French sculpture
at the beginning of our Century: Pribiš, through the
teaching of A. MailloTs work, develops claissicizing ten-

denciies, while Kostka pursues in an individual manner
the realistic line of Rodin. In this polarity, springing
from highly refined notions about a work of art, Ru-
dolf Uher’s principle sounds as a counterpoint which,
like the principles of the two preceding artists, dérivés
from the aesthetic plane of French art iat the turn
of this Century, i,.e. |a retům to the archétype of scul-
ptural form. These three divergent attitudes towards
a statue and towards sculptural work were décisive
in imparting further impulses to the development of
Slovák postwar sculpture. The principle residing in mo-
delling came to be a hinterland for its lyric bearing,
the principle of an unambiguously formuliated full form
for its more rational tendencies. The presence of ar-
chétype morphogenic promises proved of importance
to Slovák sculpture when it looked for inspiration in
its own cultural tradition — in Slovák folk art.
Also Ján Hučko (born 1910) and Otakar Cičatka
(born 1914) joined in the Creative process with their
chamber work. A conspicuous talent, eut short by an
untimely death, was Justin Hrčka (1924—1953). Rudolf
Hornák (1911—1965), then a mature sculptor personality,
carried on in his strikingly civil orientation iand An-
drej Peter (born 1912) devoted himself by then exclu-
sively to medal designing.
Slovák sculpture of the years 1945—1948 is rieh in
important, even though not numerous works, In general,
it tended towards the création of new traditions, cor-
responding to the new social conditions in expecta-
tion of further weighty social changes rather than to-
wards a development of established traditions.