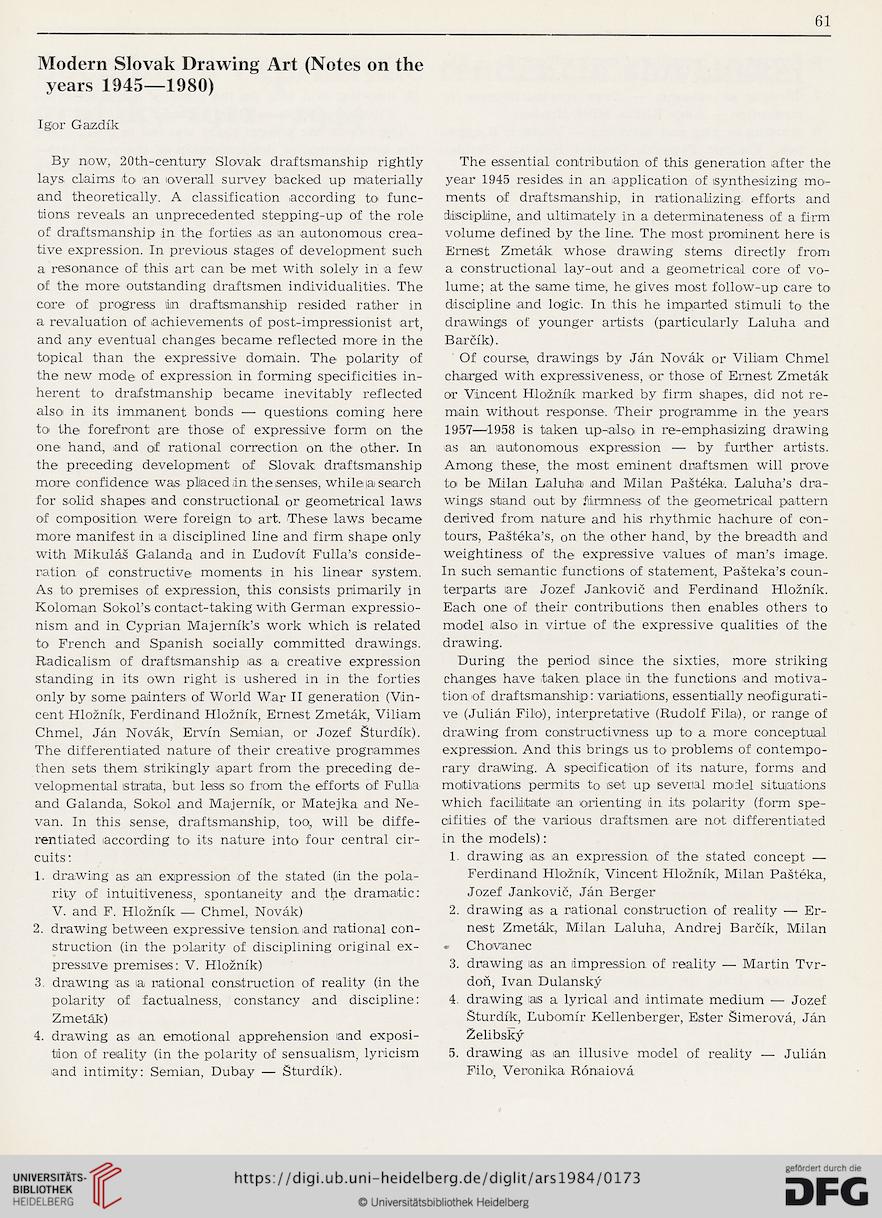 Modern Slovák Drawing Art (Notes on the
years 1945—1980)
Igor Gazdik
By now, 20th-century Slovák draftsmanship rightly
lays. Claims ito an loverall survey backed up miaterially
and theoretically. A classification according to func-
tions reveals an unprecedented stepping-up of the role
of draftsmanship in the fortieis as an autonomous Crea-
tive expression. In previous stages of development such
a resonance of this art can be met with solely in a few
of the more outstanding draftsmen individualities. The
core of progress im draftsmanship resided rather in
a revaluation of achievements of post-impressionist art,
and any eventual changes became reflected more in the
topical than the expressive domain. The polarity of
the new mode of expression in forming specificities in-
herent to drafstmanship became inevitably reflected
alsoi in its immanent bonds — questions- coming here
to the forefront are those of expressive form on the
one hand, and of rational correction on (the other. In
the preceding development of Slovák draftsmanship
more confidence was pllaced-in the senses, whileiasea-rch
for solid shapes and constructional or geometrical law.s
of composition were foreign to- art. These laws became
more manifest in a disciplined line and firm shape only
with Mikuláš Galanda and in Eudovit Fulla’s considé-
ration of constructive moments in his linear systém.
As to premises of expression, this consists primarily in
Koloman Sokol’s contact-taking with German expressio-
nism and in Cyprian Majernik’s work which is related
to- French and Spanish socially committed drawings.
Radicalism of draftsmanship as a Creative expression
standing in its own right is ushered in in the forties
only by some painters of World War II génération (Vin-
cent Hložník, Ferdinand Hložník, Ernest Zmeták, Viliam
Chmel, Ján Novák, Ervin Semian, or Jozef Sturdík).
The differentiated nature of their Creative programmes
then sets them strikingly apart from the preceding de-
velopmental istrata, but lass so from the efforts of Fulla
and Galanda, Sokol and Majerník, or Matějka and Ne-
ván. In this sense·, draftsmanship, top, will be diffe-
rentiated according to· its nature into four central cir-
cuits:
1. drawing as an expression of the stated (in the pola-
rity of intuitiveness, spontaneity and the dramat,ic:
V. and F. Hložník — Chmel, Novák)
2. drawing between expressive tension and national con-
struction (in the polarity of disciplining original ex-
pressive premises: V. Hložník)
3. drawing as la national construction of reality (in the
polarity of factualness, constancy and discipline:
Zmeták)
4. drawing as an emotional appréhension and exposi-
tion of reality (in the polarity of sensualism, lyricism
and intimity: Semian, Dubay — Sturdík).

The essential contribution of this génération after the
year 1945 résides, in an application of isynthesizing mo-
ments of draftsmanship, in nationalizing efforts and
discipline, and ultimately in a determinateness of a firm
volume defined by the line. The most prominent here is
Ernest Zmeták whose drawing stems directly from
a constructional lay-out and a geometrical core of vo-
lume; at the same time, he gives most follow-up care to·
discipline and logic. In this he impanted Stimuli to the
drawings of younger artists (particularly Laluha and
Barčík).
Of course, drawings by Ján Novák or Viliam Chmel
charged with expressiveness, or those of Ernest Zmeták
or Vincent Hložník marked by firm shapes, did not re-
main without response. Their programme in the years
1957—1958 is taken up-alsoi in re-emphasizing drawing
as an autonomous expression — by further artists.
Among these, the most eminent draftsmen will prove
to· be Milan Laluha and Milan Paštéka·. Laluha’s dra-
wings stand out by firmnesß of the geometrical pattern
derived from nature and his rhythmic hachure of con-
tours, Pastéka’s, on the other hand, by the breadth and
weightiness of the expressive values of man’s image.
In such semantic functions of Statement, Pasteka’s coun-
terparts are Jozef Jankovič and Ferdinand Hložník.
Each one of their contributions then enables others to
model also· in virtue of the expressive qualities of the
drawing.
Düring the period isince the sixties, more striking
changes have taken place (in the functions and motiva-
tion of draftsmanship : variations, essentially neofigurati-
ve (Julián Filo), interpretative (Rudolf Fila), or range of
drawing from constructivness up to a more conceptuel
expression. And this brings us to Problems of Contempo-
rary drawing. A spécification of its nature, forms and
motivations permitis to set up severial model situations
which facilitate an orienting in its polarity (form spe-
cifities of the varions draftsmen are not differentiated
in the models) :
1. drawing as. an expression of the stated concept —
Ferdinand Hložník, Vincent Hložník, Milan Paštéka,
Jozef Jankovič, Ján Berger
2. drawing as a rational construction of reality — Er-
nest Zmeták, Milan Laluha, Andrej Barčík, Milan
• Chovanec
3. drawing as an (impression of reality — Martin Tvr-
doň, Ivan Dulanský
4. drawing ais a lyrical and intimate medium — Jozef
Sturdík, Lubomír Kellenberger, Ester Šimerová, Ján
Želibský
5. drawing as an illusive model of reality — Julián
Filo, Veronika Rónaiová