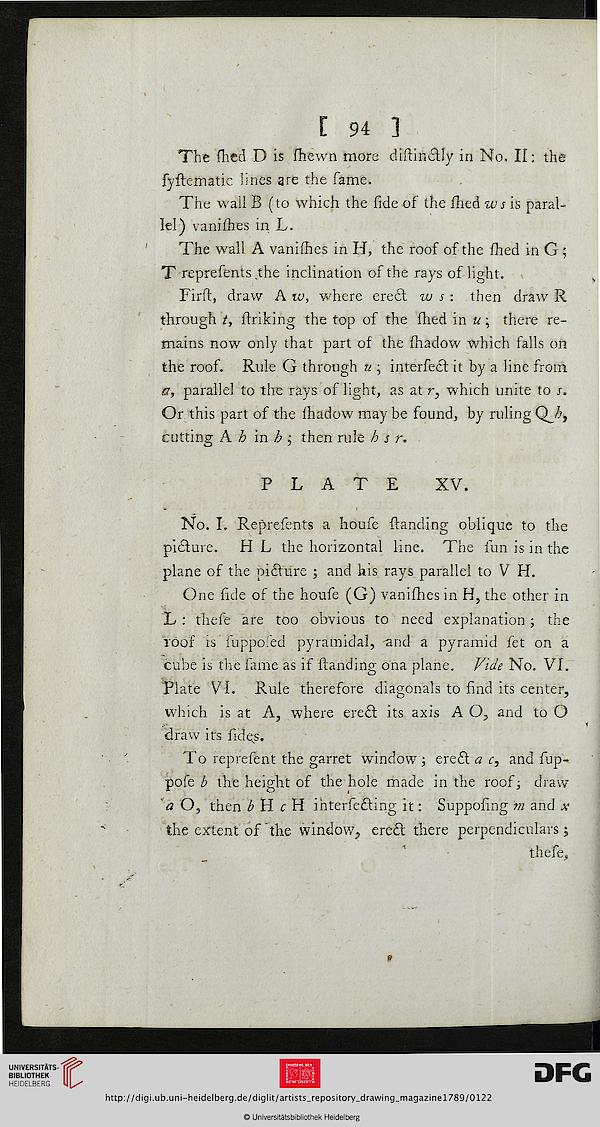 Hinweise zum OCR-Text
i 94 ]
The shed D is shewn more diflindlly in No, Is: the
syfiematic lines are the same.
The wall B (to which the side of the shed ws is paral-
lel) vanishes in L.
The wall A vanishes in H, the roof of the shed in G ;
T represents the inclination of the rays of light.
Firfi, draw A zv, where erect w s : then draw R
through t, striking the top of the shed in u \ there re-
mains now only that part of the shadow which falls on
the roof. Rule G through u ; intersebf it by a line from
a, parallel to the rays of light, as at r, which unite to s.
Or this part of the shadow may be found, by ruling
cutting Ah in h ; then rule h s r.
PLATE XV.
No. I. Represents a house Handing oblique to the
pidlure. H L the horizontal line. The sun is in the
plane of the pidfure ; and his rays parallel to V H.
One side of the house (G) vanishes in H, the other in
L : these are too obvious to need explanation; the
roof is suppofed pyramidal, and a pyramid set on a
cube is tire same as if Handing ona plane. Vide No. VI.
Plate VI. Rule therefore diagonals to find its center,
which is at A, where ereft its axis A O, and to O
draw its sidqs.
To represent the garret wdndow ; eredl a c, and sup-
pose b the height of the hole made in the roof 3 draw
a O, then b H c H intersering it: Supposing m and x
the extent os'the window, eredl there perpendiculars;
these,