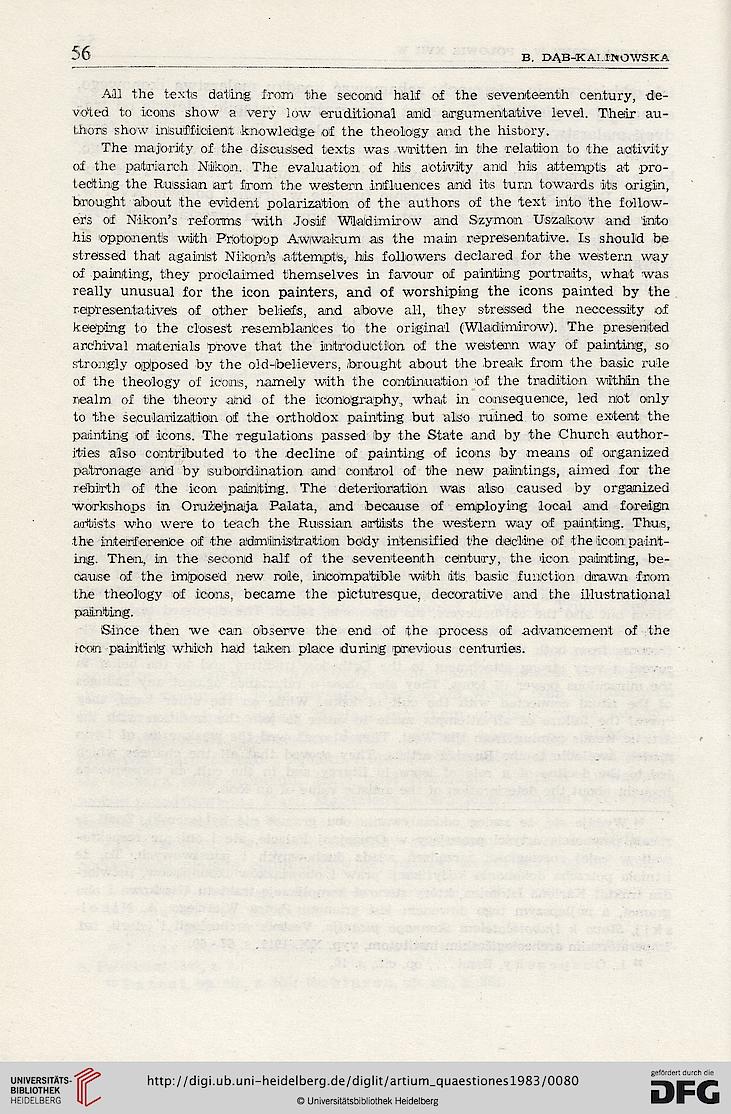 All the texte dating from the second half of the seventeenth century, de-
voted to icons show a very low eruditiona! and argumentative level. Their au-
thors show insufficient knowledge of the theology and the history.
The majority of the discussed texts was written in the relation to the activity
of the patria rich Nikon. The evaluation of his activity and his attempt!® at pro-
tecting the Russian art from the western influences and its turn towards its origin,
brought about the evident polarization of the authors of the text into the follow-
ers of Nikon’s reforms with Josif 'Władimirów and Szymon Uszalkow and 'inito
his opponents wiith Protopop Awiwakum as the main representative. Is should be
stressed that againlst Nikon’s attempts, his followers declared for the western way
of painting, they proclaimed themselves in favour of painting portraits, what was
really unusual for the icon painters, and of worshiping the icons painted by the
representatives of other beliefs, and above all, they stressed the neccesisdty of
keeping to the closest resemblanices to the original (Władimirów). The presented
archival materials prove that the introduction of the western way of painting, so
strongly opposed by the old-believers, brought about the break from the basic rule
of the theology of icons, namely with the continuation of the tradition within the
realm of the theory and of the iconography, what in consequence, led not only
to the secularization of the orthodox painting but also ruined to some extent the
painting of icons. The regulations passed by the State and by the Church author-
ities also contributed to the decline of painting of icons by means of organized
patronage arid by subordination and control of the new paintings, aimed for the
rebirth of the icon painting. The deterioration was also caused by organized
workshops in Omżejnaja Palata, and because of employing local and foreign
artists who were to teach the Russian artists the western way of painting. Thus,
the intertfereince of the adnrinistratioin body intensif ied the decline of the icon paint-
ing. Then., in the second half of the seventeenth century, the icon painting, be-
cause of the imposed new role, incompatible with dtis basic function drawn from
the theology of icons, became the picturesque, decorative and the illustnational
painting.
Since then we can observe the end of the process of advancement of the
toon painting which had taken place during previous centuries.