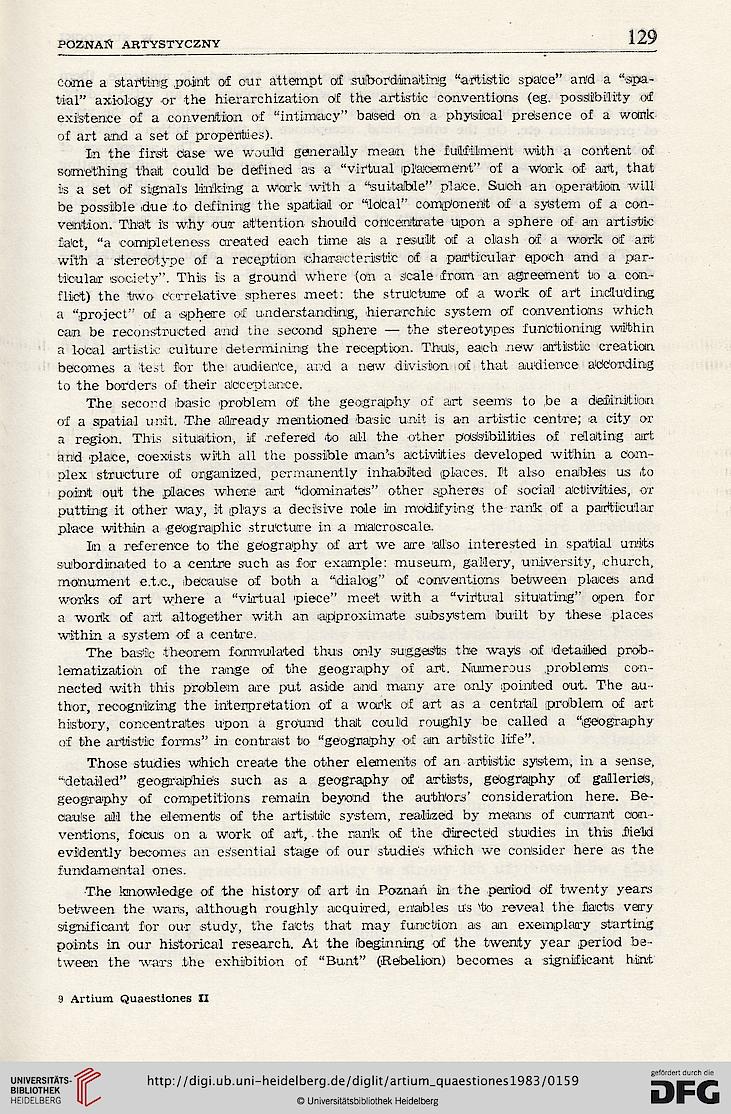 coirne a starting .point of our attempt of subordinating “artistic space” and a “'spa-
tial” axiology or the hiérarchisation oif the artistic conventions (eg. possibility of
existence of a convention of “intimacy” based on a physical présence of a wank
of art and a set of properties).
In the first case we would generally mean the fulfillment with a content of
something that could be defined as a “virtual placement” of a Work of art, that
is a set of signals linking a work with a “suitable” plaice. Suioh an operation will
be possible due to defining the spatial or “Ideal” component of a system of a con-
vention. That i's -why our attention should concentrate uipon a sphere of an artistic
fatet, “a completeness created each time hs a result of a clash of a work of art
with a stereotype of a reception characteristic of a particular epoch and a par-
ticular society”. This is a ground where (on a sleale from an agreement to a con-
flict) the two correlative spheres meet: the structure of a work of art including
a “project” of a sphere of understanding, hierarchic system of conventions which
can be reconstructed and the second sphere — the stereotypes functioning within
a local artistic culture determining the reception. Thuis, each new artistic creation
becomes a test for the audience, ar.d a new division of that audience according
to the borders of their acceptance.
The second basic problem of the geography of art seem's to .be a definit ion
of a spatial unit. The already mentioned basic unit is an artistic centre; a city or
a region. This situation, if .refered to all the other possibilities of relating art
and place, coexists with all the possible man’s activities developed within a com-
plex structure of organized, permanently inhabited places. It also enalblas us to
point out the plaices where art “dominates” other spheres of social activities, or
putting it other wtay, it plays a decisive rode in modifying the rank of a particular
place within a geographic structure in a macroscale.
In a reference to the geography of art we are also interested in spatial unite
subordinated to a centre such as for example: museum, gallery, university, church,
monument e.t.c., because of both a “dialog” of contentions between places and
works of art where a “virtual piece” meet with a “virtual situating” open for
a work of art altogether with an approximate subsystem built by these places
within a system of a centre.
The basic theorem formulated thus only suggests the wayis of detailed prob-
lematizatioh of the range of the geography of art. Numerous .problems con-
nected with this problem are put aside and many are only pointed out. The au-
thor, recognizing the interpretation of a work of art as a central problem of art
history, concentrates upon a ground that could roughly be called a “geography
of the artistic forms” in contrast to “geography of am artistic life”.
Those studies which create the other elements of an artistic system, in a sense,
“'detailed” geographies such as a geography of artists, geography of galleries,
geography of competitions remain beyond the authors’ consideration here. Be-
caulse all the elements of the artistic system, realized by means of currant con-
ventions, foicuis on a work of art, the rank of the directed studies in this field
evidently becomes an essential stage of our studies which we consider here as the
fundamental ones.
The knowledge of the history of art in Poznan in the period of twenty years
between the wars, although roughly acquired, enables Us 'to reveal the facts very
significant for our study, the facts that may function as an exemplary starting
points in our historical research. At the beginning of the twenty year period be-
tween the wars the exhibition of “Bunt” (Bebeiion) becomes a significant hint