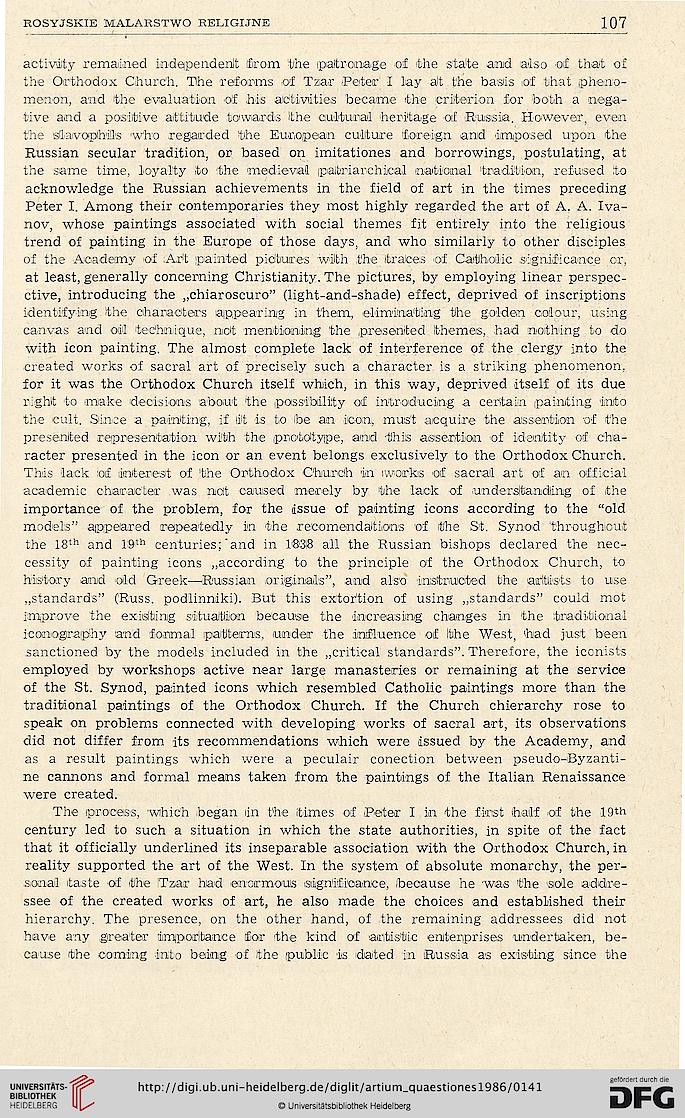 activity remained indeipendenlt Srom the ipialtr-ona-g-e -of the state and also of that of
the Orthodox Church. The reforms of Tzar .Peter I lay alt the basis of that pheno-
menon, and the evaluation off his activities became the criterion for both a nega-
tive and a positive attitude towards Ithe cultural heritage of Russia. However, even
the Slavophils- who regarded the European culture foreign and imposed upon the
Russian secular tradition, or based on imitationes and borrowings, postulating, at
the -same time, loyalty to the medieval paifcriarchical national tradition, refused to
acknowledge the Russian achievements in the field of art in the times preceding
Peter I. Among their contemporaries they most highly regarded the art of A. A. Iva-
nov, whose paintings associated with social themes fit entirely into the religious
trend of painting in the Europe of those days, and who similarly to other disciples
of the Academy of :Ar!t painted pictures wilth the Itraices of Catholic significance or,
at least, generally concerning Christianity. The pictures, by employing linear perspec-
etive, introducing the „chiaroscuro” (light-and-shade) effect, deprived of inscriptions
identifying the cihanaeters appearing in them, eliminating tlbe golden colour, using
canvas and oil technique, not -mentioning the presented themes, had nothing to d,o
with icon painting. The almost complete lack of interference of the clergy into the
created works of sacral art of precisely such a character is a striking phenomenon,
for it was the Orthodox Church itself which, in this way, deprived itself of its due
right to make decisions about the possibility of introducing .a certain painting -into
the cult. Since a painting, if lit is to toe an- icon, muis't acquire the assertion -of the
presented representation with the prototype, and -this assertion of identity of Cha-
racter presented in the icon or an event belongs exclusively to the Orthodox Church.
This lack of interest of the Orthodox Church in iworkis of sacrail art of an official
academic character was ncit -caused -merely by the lack of understanding of the
importance of the problem, for the issue of painting icons according to the “old
models” appeared repeatedly in the recomendaitians -of the St. Synod throughout
the 18th and 19|th centuries;‘and in 18-318 all the Russian bishops declared the nec-
cessity of painting icons „according to the principle of the Orthodox Church, to
history and -old Greek—Russian originals”, and also -instructed the artists to use
„standards” (Russ, podlinniki). But this extortion of using „standards” could mot
improve the existing situation because the -increasing changes in -the traditional
iconography and formal patterns, under the influence -of the West, had just been
sanctioned by the models included in the „critical standards”. Therefore, the iconists
employed by workshops active near large manasteries or remaining at the service
of the St. Synod, painted icons which resembled Catholic paintings more than the
traditional paintings of the Orthodox Church. If the Church chierarchy rose to
speak on problems connected with developing works of sacral art, its observations
did not differ from its recommendations which were issued by the Academy, and
as a r-esult paintings which were a peculair conection between pseudo-Byzanti-
ne cannons and formal means taken from the paintings of the Italian Renaissance
were created.
The process, -which -began in the -times of -Peter I in the first half -of the 19th
century led to such a situation in which the state authorities, in spite of the fact
that it officially underlined its inseparable -association With the Orthodox Church, in
reality supported the art of the West. In the system of absolute monarchy, the per-
s-om-a-l -taste of -the ITzar had -en-ormouis isiign'ifi-c-anice, -because he wa.s the -siole addre-
ssee of the created works of art, he also made the choices -and established their
hierarchy. The presence, on the other hand, of the remaining addressees did not
hav-e any greater iimporlta-mce for -the kind of -anti-stile enterprises undertaken, be-
cause the coming into being -of the publ-ic is dated in iRus-s-i-a a-s existing since the