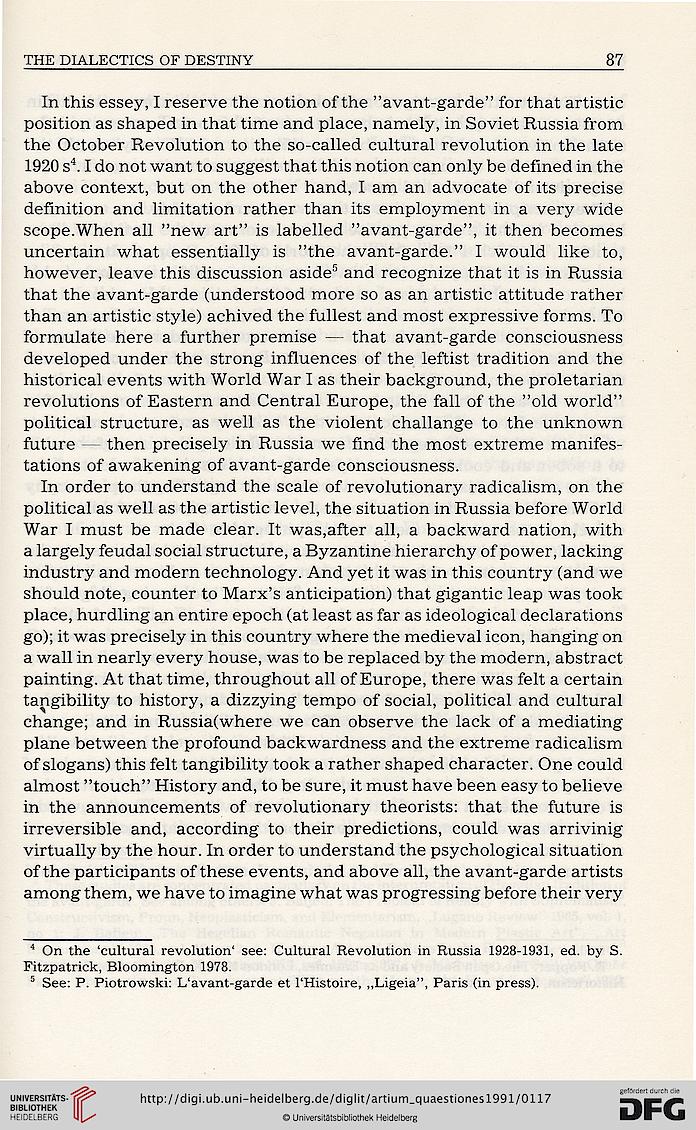 In this essey, I reserve the notion of the "avant-garde" for that artistic
position as shaped in that time and place, namely, in Soviet Russia from
the October Revolution to the so-called cultural revolution in the late
1920 s'*. I do not want to suggest that this notion can only be defined in the
above context, but on the other hand, I am an advocate of its precise
definition and limitation rather than its employment in a very wide
scope.When all "new art" is labelled "avant-garde", it then becomes
uncertain what essentially is "the avant-garde." I would like to,
however, leave this discussion aside^ and recognize that it is in Russia
that the avant-garde (understood more so as an artistic attitude rather
than an artistic style) achived the fullest and most expressive forms. To
formulate here a further premise — that avant-garde consciousness
developed under the strong influences of the leftist tradition and the
historical events with World War I as their background, the proletarian
revolutions of Eastern and Central Europe, the fall of the "old world"
political structure, as well as the violent challange to the unknown
future — then precisely in Russia we find the most extreme manifes-
tations of awakening of avant-garde consciousness.
In order to understand the scale of revolutionary radicalism, on the
political as well as the artistic level, the situation in Russia before World
War I must be made clear. It was,after all, a backward nation, with
a largely feudal social structure, a Byzantine hierarchy of power, lacking
industry and modern technology. And yet it was in this country (and we
should note, counter to Marx's anticipation) that gigantic leap was took
place, hurdling an entire epoch (at least as far as ideological declarations
go); it was precisely in this country where the medieval icon, hanging on
a wall in nearly every house, was to be replaced by the modern, abstract
painting. At that time, throughout all of Europe, there was felt a certain
tangibility to history, a dizzying tempo of social, political and cultural
change; and in Russia(where we can observe the lack of a mediating
plane between the profound backwardness and the extreme radicalism
of slogans) this felt tangibility took a rather shaped character. One could
almost "touch" History and, to be sure, it must have been easy to believe
in the announcements of revolutionary theorists: that the future is
irreversible and, according to their predictions, could was arrivinig
virtually by the hour. In order to understand the psychological situation
of the participants of these events, and above all, the avant-garde artists
among them, we have to imagine what was progressing before their very