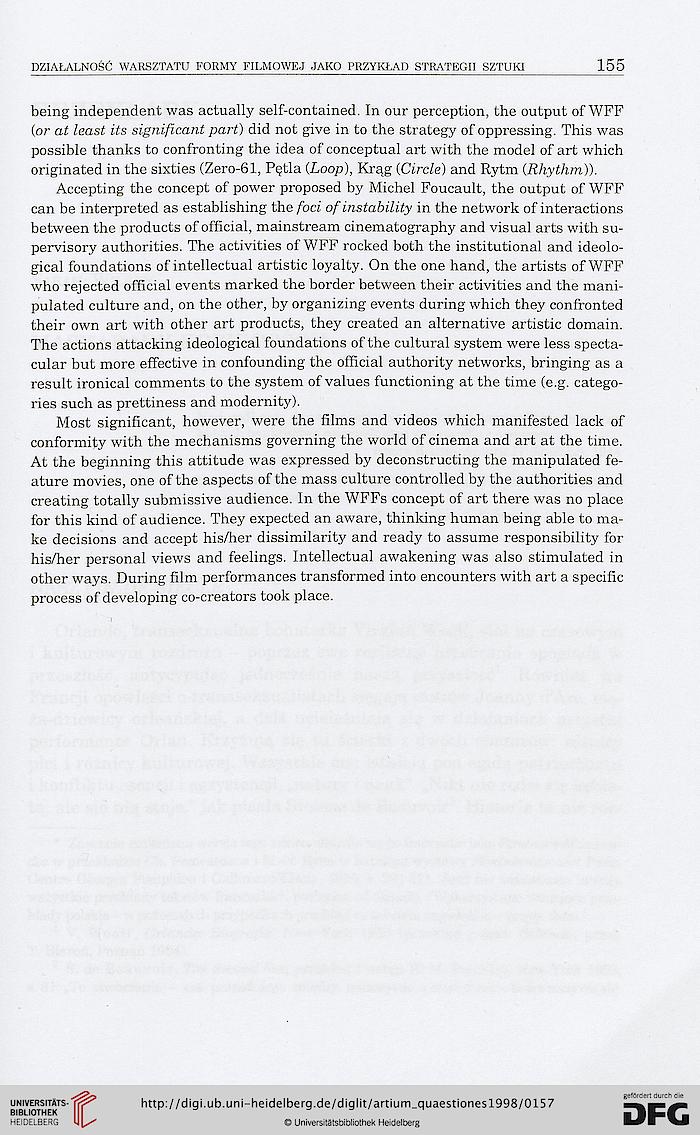 being independent was actually self-contained. In our perception, the output of WFF
(or at least its significant part) did not give in to the strategy of oppressing. This was
possible thanks to confronting the idea of conceptual art with the model of art which
originated in the sixties (Zero-61, Pętla (Loop), Krąg (Circle) and Rytm (Rhythm)).
Accepting the concept of power proposed by Michel Foucault, the output of WFF
can be interpreted as establishing the foci of instability in the network of interactions
between the products of official, mainstream cinematography and visual arts with su-
pervisory authorities. The activities of WFF rocked both the institutional and ideolo-
gical foundations of intellectual artistic loyalty. On the one hand, the artists of WFF
who rejected official events marked the border between their activities and the mani-
pulated culture and, on the other, by organizing events during which they confronted
their own art with other art products, they created an alternative artistic domain.
The actions attacking ideological foundations of the cultural system were less specta-
cular but morę effective in confounding the official authority networks, bringing as a
result ironical comments to the system of values functioning at the time (e.g. catego-
ries such as prettiness and modernity).
Most significant, however, were the films and videos which manifested lack of
conformify with the mechanisms governing the world of cinema and art at the time.
At the beginning this attitude was expressed by deconstructing the manipulated fe-
ature movies, one of the aspects of the mass culture controlled by the authorities and
creating totally submissive audience. In the WFFs concept of art there was no place
for this kind of audience. They expected an aware, thinking human being able to ma-
ke decisions and accept his/her dissimilarity and ready to assume responsibility for
his/her personal views and feelings. Intellectual awakening was also stimulated in
other ways. During film performances transformed into encounters with art a specific
process of deyeloping co-creators took place.