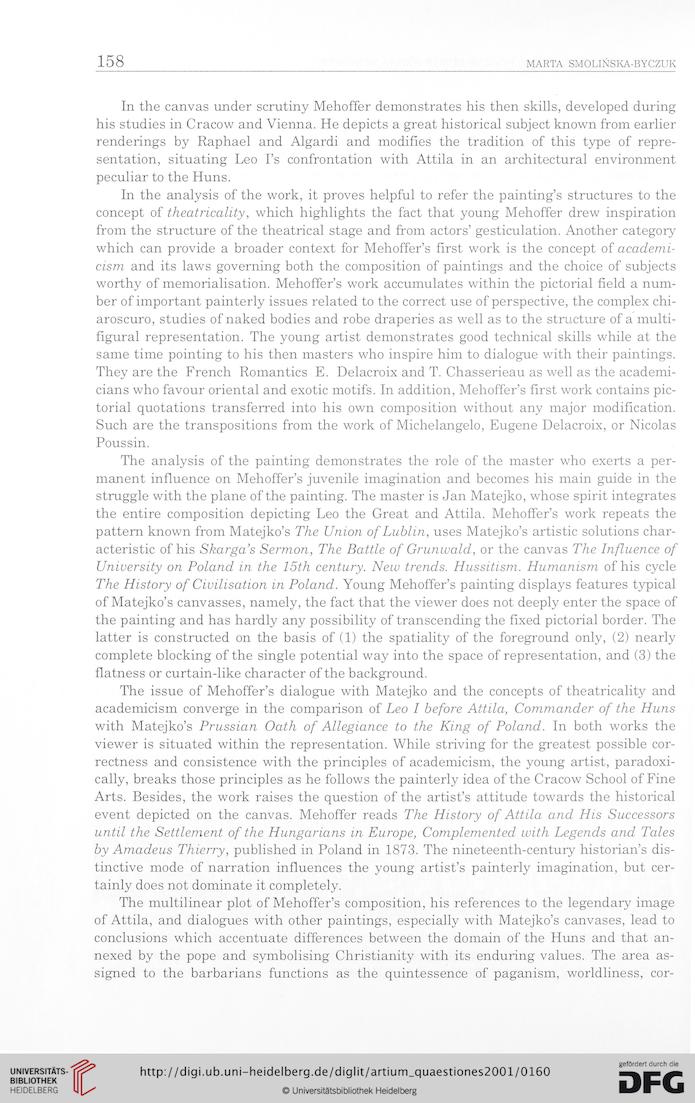 In the canvas under scrutiny Mehoffer demonstrates his then skills, developed during
his studies in Cracow and Vienna. He depicts a gi'eat historical subject known from earlier
renderings by Raphael and Algardi and modifles the tradition of this type of repre-
sentation, situating Leo I’s confrontation with Attila in an architectural environment
peculiar to the Huns.
In the analysis of the work, it proves helpful to refer the painting’s structures to the
concept of theatricality, which highlights the fact that young Mehoffer drew inspiration
from the structure of the theatrical stage and from actors’ gesticulation. Another category
which can provide a broader context for Mehoffer’s first work is the concept of academi-
cism and its laws governing both the composition of paintings and the choice of subjects
worthy of memorialisation. Mehoffer’s work accumulates within the pictorial field a num-
ber of important painterly issues related to the correct use of perspective, the complex chi-
aroscuro, studies of naked bodies and robę draperies as well as to the structure of a multi-
figural representation. The young artist demonstrates good technical skills while at the
same time pointing to his then masters who inspire him to dialogue with their paintings.
They are the French Romantics E. Delacroix and T. Chasserieau as well as the academi-
cians who favour oriental and exotic motifs. In addition, Mehoffer’s first work contains pic-
torial ąuotations transferred into his own composition without any major modification.
Such are the transpositions from the work of Michelangelo, Eugene Delacroix, or Nicolas
Poussin.
The analysis of the painting demonstrates the role of the master who exerts a per-
manent influence on Mehoffer’s juvenile imagination and becomes his main guide in the
struggle with the piane of the painting. The master is Jan Matejko, whose spirit integrates
the entire composition depicting Leo the Great and Attila. Mehoffer’s work repeats the
pattem known from Matejko’s The Union of Lublin, uses Matejko’s artistic Solutions char-
acteristic of his Skarga’s Sermon, The Battle of Grunwald, or the canvas The Influence of
Uniuersity on Poland in the 15th century. New trends. Hussitism. Humanism of his cycle
The History of Ciuilisation in Poland. Young Mehoffer’s painting displays features typical
of Matejko’s canvasses, namely, the fact that the viewer does not deeply enter the space of
the painting and has hardly any possibility of transcending the flxed pictorial border. The
latter is constructed on the basis of (1) the spatiality of the foreground only, (2) nearly
complete blocking of the single potential way into the space of representation, and (3) the
flatness or curtain-like character of the background.
The issue of Mehoffer’s dialogue with Matejko and the concepts of theatricality and
academicism converge in the comparison of Leo I before Attila, Commander of the Huns
with Matejko’s Prussian Oath of Allegiance to the King of Poland. In both works the
viewer is situated within the representation. While striving for the greatest possible cor-
rectness and consistence with the principles of academicism, the young artist, paradoxi-
cally, breaks those principles as he follows the painterly idea of the Cracow School of Fine
Arts. Besides, the work raises the ąuestion of the artisfs attitude towards the historical
event depicted on the canvas. Mehoffer reads The History of Attila and His Successors
until the Settlement of the Hungarians in Europę, Complemented with Legends and Tales
by Amadeus Thierry, published in Poland in 1873. The nineteenth-century historian’s dis-
tinctive modę of narration influences the young artisfs painterly imagination, but cer-
tainly does not dominate it completely.
The multilinear plot of Mehoffefs composition, his references to the legendary image
of Attila, and dialogues with other paintings, especially with Matejko’s canvases, lead to
conclusions which accentuate differences between the domain of the Huns and that an-
nexed by the pope and symbolising Christianity with its enduring values. The area as-
signed to the barbarians functions as the ąuintessence of paganism, worldliness, cor-