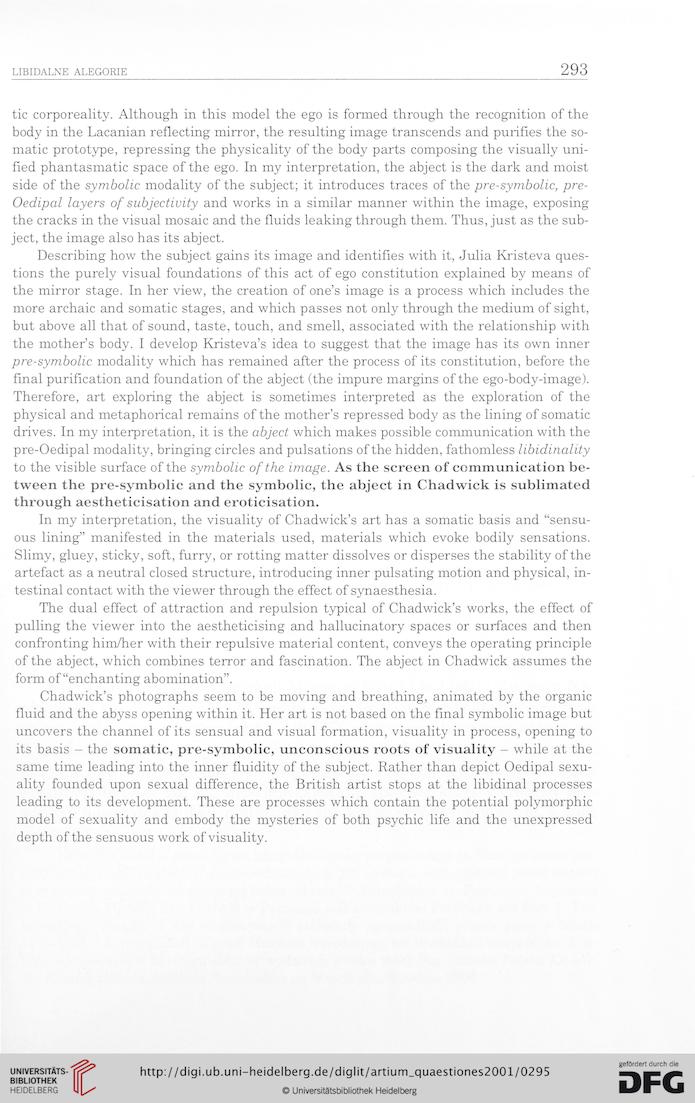 tic corporeality. Although in this model the ego is formed through the recognition of the
body in the Lacanian reflecting mirror, the resulting image transcends and purifies the so-
matic prototype, repressing the physicality of the body parts composing the visually uni-
fied phantasmatic space of the ego. In my interpretation, the abject is the dark and moist
side of the symbolic modality of the subject; it introduces traces of the pre-symbolic, pre-
Oedipal layers of subjectivity and works in a similar manner within the image, exposing
the cracks in the visual mosaic and the fluids leaking through them. Thus, just as the sub-
ject, the image also has its abject.
Describing how the subject gains its image and identifies with it, Julia Kristeva ques-
tions the purely visual foundations of this act of ego constitution explained by means of
the mirror stage. In her view, the creation of one’s image is a process which includes the
morę archaic and somatic stages, and which passes not only through the medium of sight,
but above all that of sound, taste, touch, and smell, associated with the relationship with
the mother’s body. I develop Kristeva’s idea to suggest that the image has its own inner
pre-symbolic modality which has remained after the process of its constitution, before the
finał purification and foundation of the abject (the impure margins of the ego-body-image).
Therefore, art exploring the abject is sometimes interpreted as the exploration of the
physical and metaphorical remains of the mother’s repressed body as the lining of somatic
drives. In my interpretation, it is the abject which makes possible communication with the
pre-Oedipal modality, bringing circles and pulsations of the hidden, fathomless libidinality
to the visible surface of the symbolic ofthe image. As the screen of communication be-
tween the pre-symbolic and the symbolic, the abject in Chadwick is sublimated
through aestheticisation and eroticisation.
In my interpretation, the visuality of Chadwick’s art has a somatic basis and “sensu-
ous lining” manifested in the materials used, materials which evoke bodily sensations.
Slimy, gluey, sticky, soft, furry, or rotting matter dissolves or disperses the stability of the
artefact as a neutral closed structure, introducing inner pulsating motion and physical, in-
testinal contact with the viewer through the effect of synaesthesia.
The dual effect of attraction and repulsion typical of Chadwick’s works, the effect of
pulling the viewer into the aestheticising and hallucinatory spaces or surfaces and then
confronting him/her with their repulsive materiał content, conveys the operating principle
of the abject, which combines terror and fascination. The abject in Chadwick assumes the
form of “enchanting abomination”.
Chadwick’s photographs seem to be moving and breathing, animated by the organie
fluid and the abyss opening within it. Her art is not based on the finał symbolic image but
uncovers the channel of its sensual and visual formation, visuality in process, opening to
its basis - the somatic, pre-symbolic, unconscious roots of visuality - while at the
same time leading into the inner fluidity of the subject. Rather than depict Oedipal sexu-
ality founded upon sexual difference, the British artist stops at the libidinal processes
leading to its development. These are processes which contain the potential polymorphic
model of sexuality and embody the mysteries of both psychic life and the unexpressed
depth of the sensuous work of visuality.