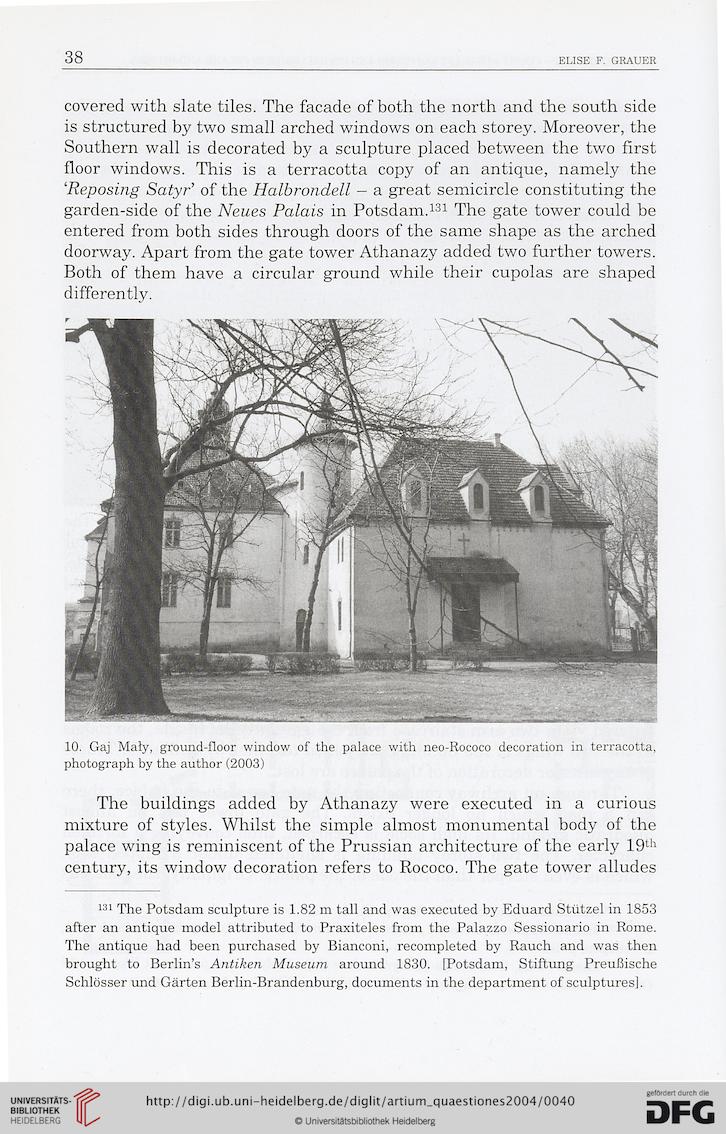 covered with slate tiles. The facade of both the north and the south side
is structured by two small arched windows on each storey. Moreover, the
Southern wall is decorated by a sculpture placed between the two first
floor windows. This is a terracotta copy of an antique, namely the
‘Reposing Satyr’ of the Halbrondell - a great semicircle constituting the
garden-side of the Neues Palais in Potsdam.131 The gate tower could be
entered from both sides through doors of the same shape as the arched
doorway. Apart from the gate tower Athanazy added two further towers.
Both of them have a circular ground while their cupolas are shaped
differently.


10. Gaj Maly, ground-floor window of the palace with neo-Rococo decoration in terracotta,
photograph by the author (2003)

The buildings added by Athanazy were executed in a curious
mixture of styles. Whilst the simple almost monumental body of the
palace wing is reminiscent of the Prussian architecture of the early 19th
century, its window decoration refers to Rococo. The gate tower alludes

131 The Potsdam sculpture is 1.82 m tall and was executed by Eduard Stützei in 1853
after an antique model attributed to Praxiteles from the Palazzo Sessionario in Rome.
The antique had been purchased by Bianconi, recompleted by Rauch and was then
brought to Berlin’s Antiken Museum around 1830. [Potsdam, Stiftung Preußische
Schlösser und Gärten Berlin-Brandenburg, documents in the department of sculptures].