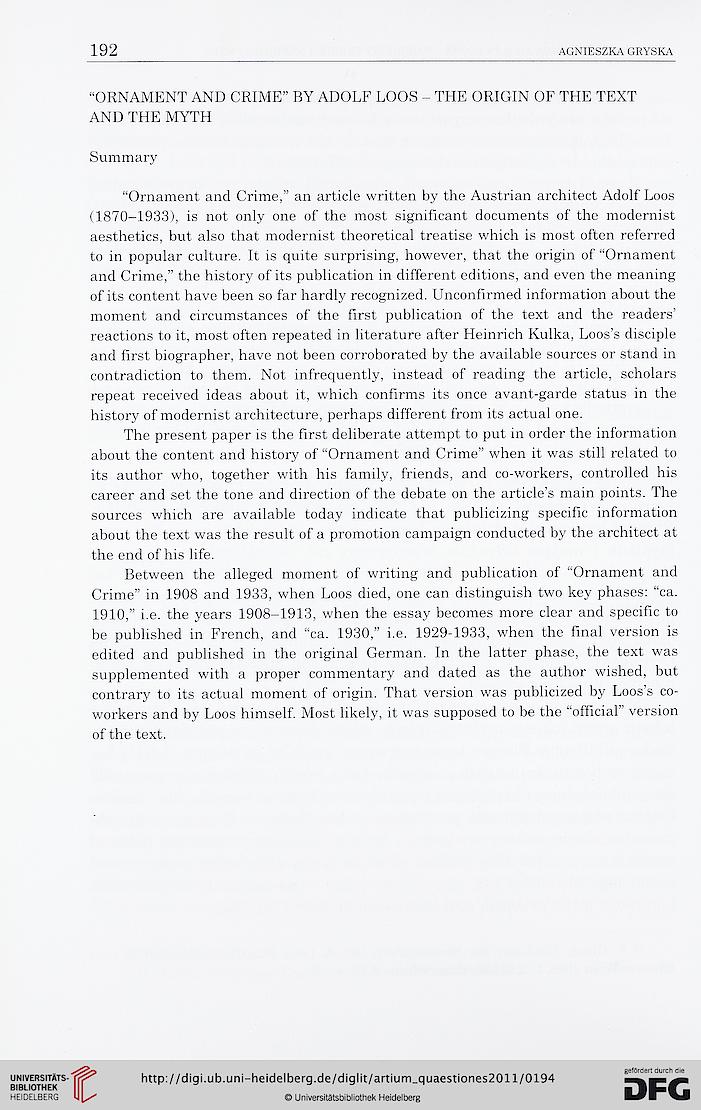 "ORNAMENT AND CRIME" BY ADOLF LOOS - THE ORIGIN OF THE TEXT
ANDTHEMYTH
Summary
"Ornament and Crime," an article written by the Austrian architect Adolf Loos
(1870-1933), is not only one of the most significant documents of the modernist
aesthetics, but also that modernist theoretical treatise which is most often referred
to in popular culture. It is quite surprising, however, that the origin of "Ornament
and Crime," the history of its publication in different editions, and even the meaning
of its content have been so far hardly recognized. Unconhrmed information about the
moment and circumstances of the iirst publication of the text and the readers'
reactions to it, most often repeated in literaturę after Heinrich Kulka, Loos's disciple
and first biographer, have not been corroborated by the available sources or stand in
contradiction to them. Not infrequently, instead of reading the article, scholars
repeat received ideas about it, which confirms its once avant-garde status in the
history of modernist architecture, perhaps different from its actual one.
The present paper is the first deliberate attempt to put in order the information
about the content and history of "Ornament and Crime" when it was still related to
its author who, together with his family, friends, and co-workers, controlled his
career and set the tonę and direction of the debate on the article's main points. The
sources which are available today indicate that publicizing specific information
about the text was the result of a promotion campaign conducted by the architect at
the end of his life.
Between the alleged moment of writing and publication of "Ornament and
Crime" in 1908 and 1933, when Loos died, one can distinguish two key phases: "ca.
1910," i.e. the years 1908-1913, when the essay becomes morę elear and specific to
be published m French, and "ca. 1930," i.e. 1929-1933, when the finał version is
edited and published in the original German. In the latter phase, the text was
supplemented with a proper commentary and dated as the author wished, but
contrary to its actual moment of origin. That version was publicized by Loos's co-
workers and by Loos himself. Most likely, it was supposed to be the "official" version
of the text.