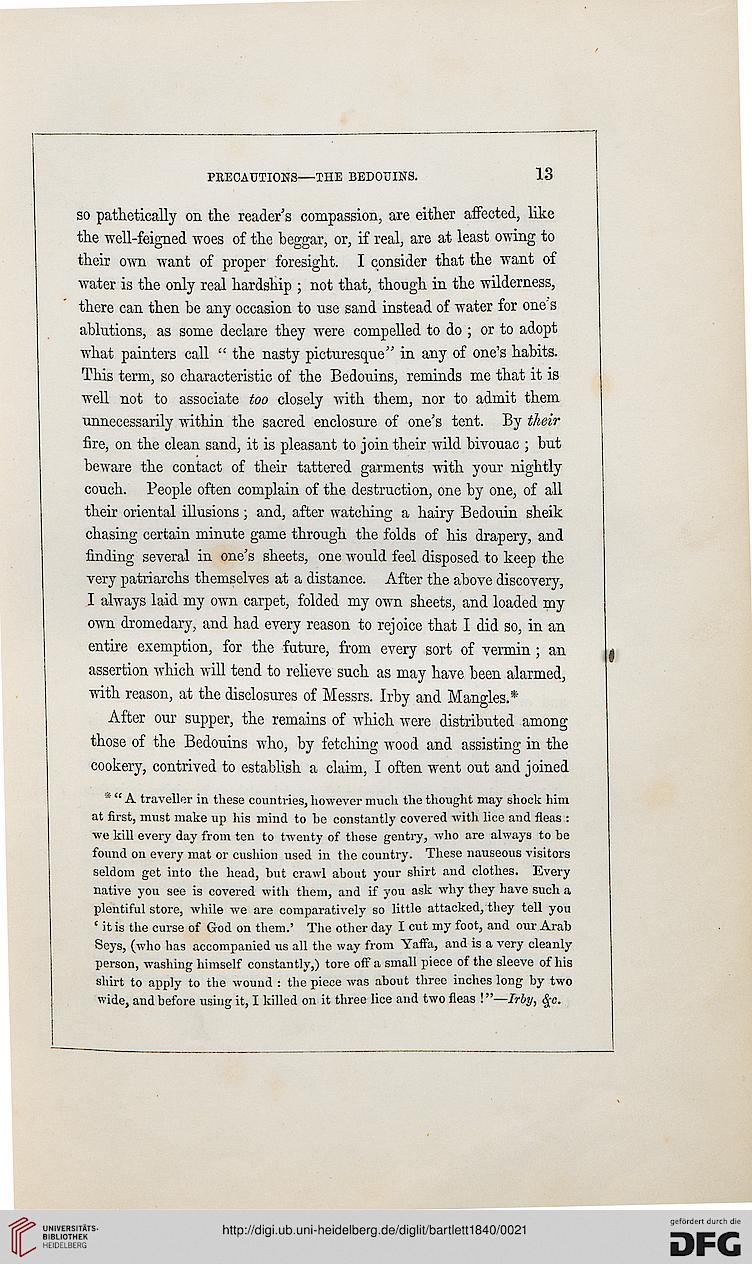 so pathetically on the reader's compassion, are either affected, like
the well-feigned woes of the beggar, or, if real, are at least owing to
their own want of proper foresight. I consider that the want of
water is the only real hardship ; not that, though in the wilderness,
there can then be any occasion to use sand instead of water for one's
ablutions, as some declare they were compelled to do ; or to adopt
what painters call " the nasty picturesque" in any of one's habits.
This term, so characteristic of the Bedouins, reminds me that it is
well not to associate too closely with them, nor to admit them
unnecessarily within the sacred enclosure of one's tent. By their
fire, on the clean sand, it is pleasant to join their wild bivouac ; but
beware the contact of their tattered garments with your nightly
couch. People often complain of the destruction, one by one, of all
their oriental illusions; and, after watching a hairy Bedouin sheik
chasing certain minute game through the folds of his drapery, and
finding several in one's sheets, one would feel disposed to keep the
very patriarchs themselves at a distance. After the above discovery,
I always laid my own carpet, folded my own sheets, and loaded my
own dromedary, and had every reason to rejoice that I did so, in an
entire exemption, for the future, from every sort of vermin ; an
assertion which will tend to relieve such as may have been alarmed,
with reason, at the disclosures of Messrs. Irby and Mangles.*

After our supper, the remains of which were distributed among
those of the Bedouins who, by fetching wood and assisting in the
cookery, contrived to establish a claim, I often went out and joined

* " A traveller in these countries, however much the thought may shock him
at first, must make up his mind to be constantly covered with lice and fleas :
we kill every day from ten to twenty of these gentry, who are always to be
found on every mat or cushion used in the country. These nauseous visitors
seldom get into the head, but crawl about your shirt and clothes. Every
native you see is covered with them, and if you ask why they have such a
plentiful store, while we are comparatively so little attacked, they tell you
' it is the curse of God on them.' The other day I cut my foot, and our Arab
Seys, (who has accompanied us all the way from Yaffa, and is a very cleanly
person, washing himself constantly,) tore off a small piece of the sleeve of his
shirt to apply to the wound : the piece was about three inches long by two
wide, and before using it, I killed on it three lice and two fleas ! "—Irby, $c.