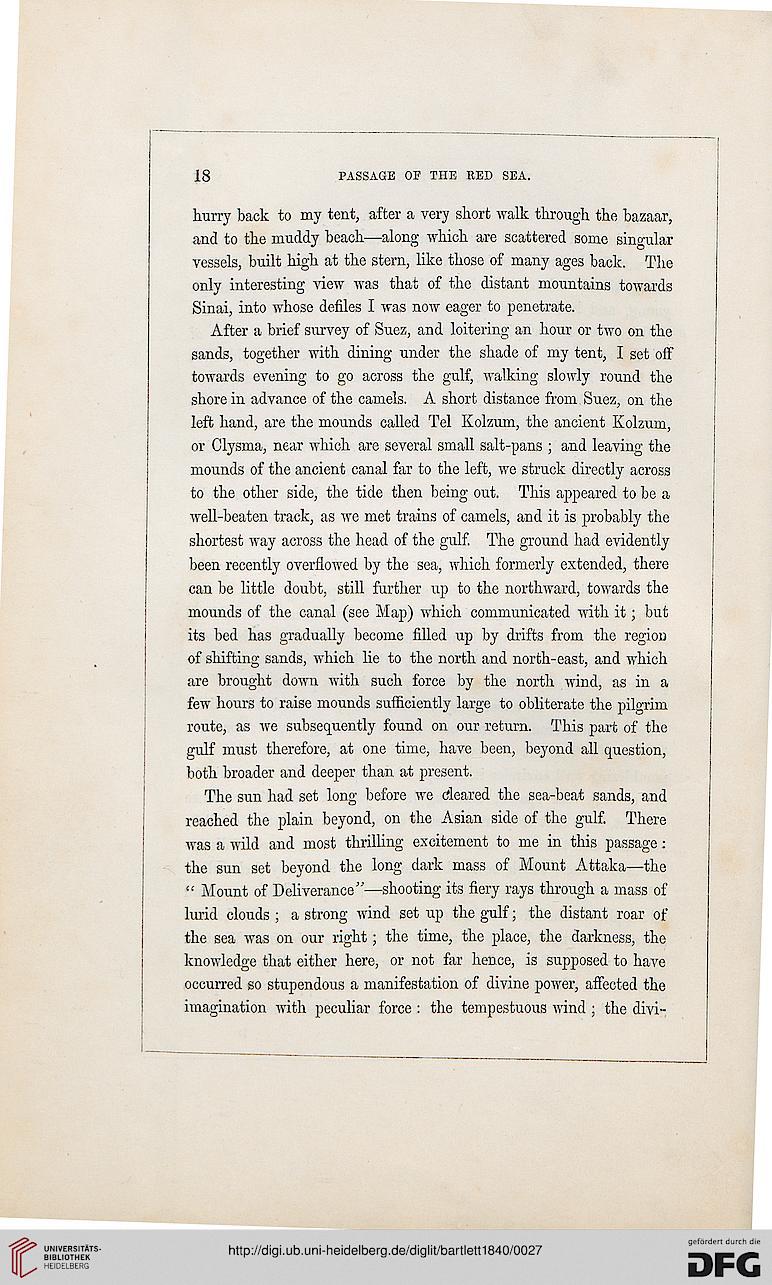 hurry back to my tent, after a very short walk through the bazaar,
and to the muddy beach—along which are scattered some singular
vessels, built high at the stern, like those of many ages back. The
only interesting view was that of the distant mountains towards
Sinai, into whose defiles I was now eager to penetrate.

After a brief survey of Suez, and loitering an hour or two on the
sands, together with dining under the shade of my tent, I set off
towards evening to go across the gulf, walking slowly round the
shore in advance of the camels. A short distance from Suez, on the
left hand, are the mounds called Tel Kolzum, the ancient Kolzum,
or Clysma, near which are several small salt-pans ; and leaving the
mounds of the ancient canal far to the left, we struck directly across
to the other side, the tide then being out. This appeared to be a
well-beaten track, as we met trains of camels, and it is probably the
shortest way across the head of the gulf. The ground had evidently
been recently overflowed by the sea, which formerly extended, there
can be little doubt, still further up to the northward, towards the
mounds of the canal (see Map) which communicated with it; but
its bed has gradually become filled up by drifts from the region
of shifting sands, which lie to the north and north-east, and which
are brought down with such force by the north wind, as in a
few hours to raise mounds sufficiently large to obliterate the pilgrim
route, as we subsequently found on our return. This part of the
gulf must therefore, at one time, have been, beyond all question,
both broader and deeper than at present.

The sun had set long before we Cleared the sea-beat sands, and
reached the plain beyond, on the Asian side of the gulf. There
was a wild and most thrilling excitement to me in this passage:
the sun set beyond the long dark mass of Mount Attaka—the
" Mount of Deliverance"—shooting its fiery rays through a mass of
lurid clouds; a strong wind set up the gulf; the distant roar of
the sea was on our right; the time, the place, the darkness, the
knowledge that either here, or not far hence, is supposed to have
occurred so stupendous a manifestation of divine power, affected the
imagination with peculiar force : the tempestuous wind ; the divi-