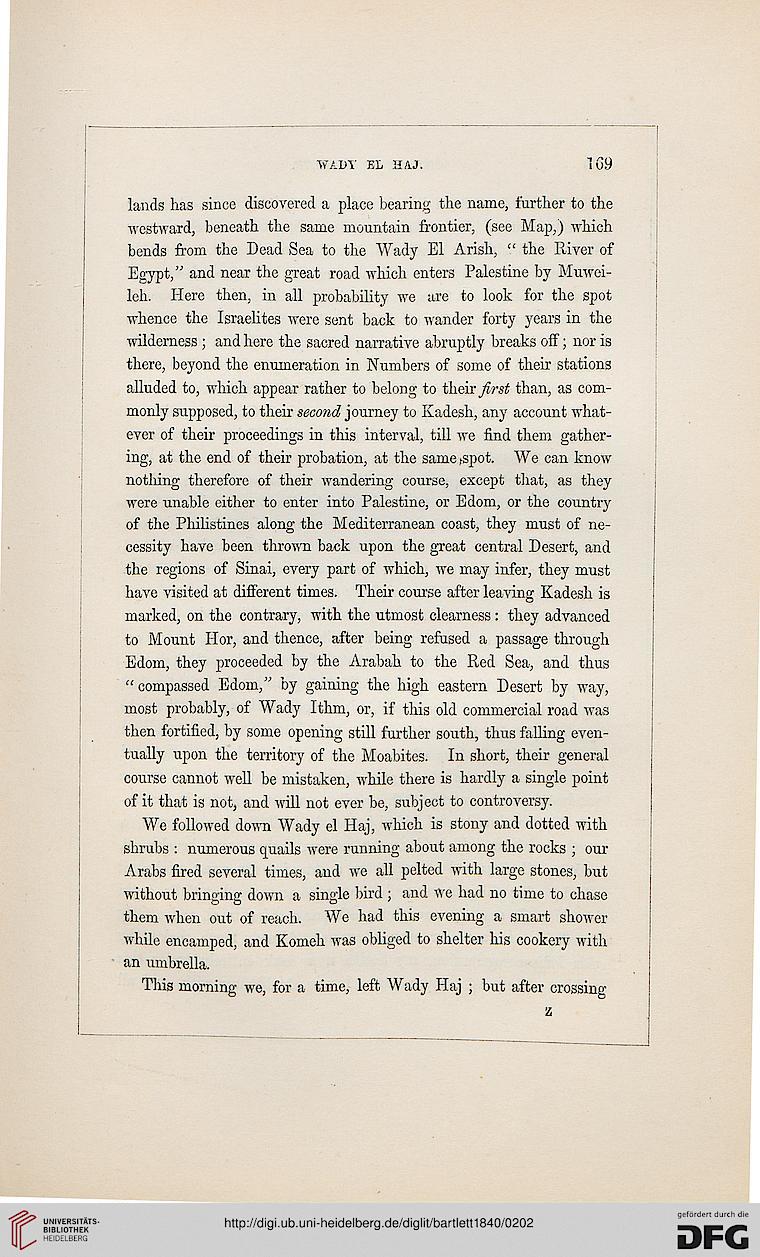 lands has since discovered a place bearing the name, further to the
westward; beneath the same mountain frontier, (see Map,) which
bends from the Dead Sea to the Wady El Arish, '.' the River of
Egypt," and near the great road which enters Palestine by Muwei-
leh. Here then, in all probability we are to look for the spot
whence the Israelites were sent back to wander forty years in the
wilderness ; and here the sacred narrative abruptly breaks off; nor is
there, beyond the enumeration in Numbers of some of their stations
alluded to, which appear rather to belong to their first than, as com-
monly supposed, to their second journey to Kadesh, any account what-
ever of their proceedings in this interval, till we find them gather-
ing, at the end of their probation, at the sametspot. We can know-
nothing therefore of their wandering course, except that, as they
were unable either to enter into Palestine, or Edom, or the country
of the Philistines along the Mediterranean coast, they must of ne-
cessity have been thrown back upon the great central Desert, and
the regions of Sinai, every part of which, we may infer, they must
have visited at different times. Their course after leaving Kadesh is
marked, on the contrary, with the utmost clearness : they advanced
to Mount Hor, and thence, after being refused a passage through
Edom, they proceeded by the Arabah to the Red Sea, and thus
"compassed Edom," by gaining the high eastern Desert by way,
most probably, of Wady Ithm, or, if this old commercial road was
then fortified, by some opening still further south, thus falling even-
tually upon the territory of the Moabites. In short, their general
course cannot well be mistaken, while there is hardly a single point
of it that is not, and will not ever be, subject to controversy.

We followed down Wady el Haj, which is stony and dotted with
shrubs : numerous quails were running about among the rocks ; our
Arabs fired several times, and we all pelted with large stones, but
without bringing down a single bird ; and We had no time to chase
them when out of reach. We had this evening a smart shower
while encamped, and Komeh was obliged to shelter his cookery with
an umbrella.

This morning we, for a time, left Wady Haj ; but after crossing