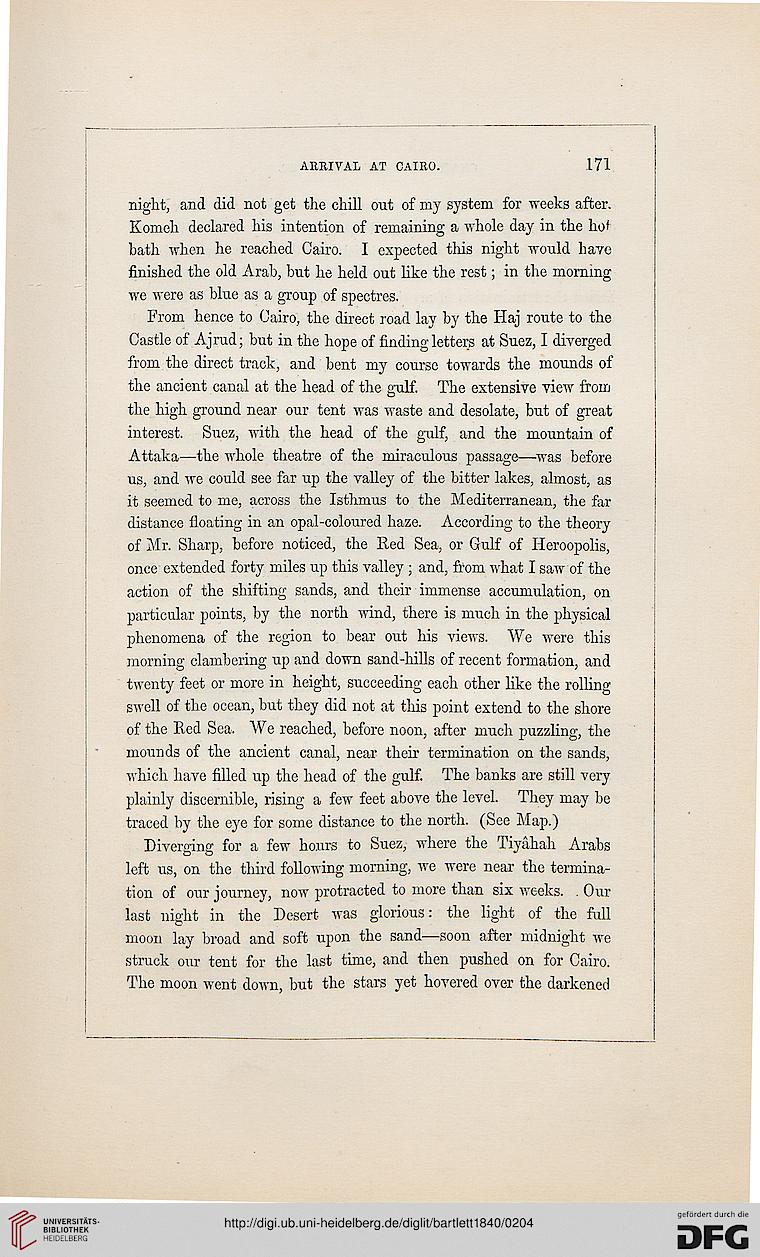 night; and did not get the chill out of my system for weeks after.
Komeh declared his intention of remaining a whole day in the ho*
bath when he reached Cairo. I expected this night would have
finished the old Arab, but he held out like the rest; in the morning
we were as blue as a group of spectres.

From hence to Cairo, the direct road lay by the Haj route to the
Castle of Ajrud; but in the hope of finding letters at Suez, I diverged
from the direct track, and bent my course towards the mounds of
the ancient canal at the head of the gulf. The extensive view from
the high ground near our tent was waste and desolate, but of great
interest. Suez, with the head of the gulf, and the mountain of
Attaka—the whole theatre of the miraculous passage—was before
us, and we could see far up the valley of the bitter lakes, almost, as
it seemed to me, across the Isthmus to the Mediterranean, the far
distance floating in an opal-coloured haze. According to the theory
of Mr. Sharp, before noticed, the Red Sea, or Gulf of Heroopolis,
once extended forty miles up this valley ; and, from what I saw of the
action of the shifting sands, and their immense accumulation, on
particular points, by the north wind, there is much in the physical
phenomena of the region to bear out his views. We were this
morning clambering up and down sand-hills of recent formation, and
twenty feet or more in height, succeeding each other like the rolling
swell of the ocean, but they did not at this point extend to the shore
of the Bed Sea. We reached, before noon, after much puzzling, the
mounds of the ancient canal, near their termination on the sands,
which have filled up the head of the gulf. The banks are still very
plainly discernible, rising a few feet above the level. They may be
traced by the eye for some distance to the north. (See Map.)

Diverffinsr for a few hours to Suez, where the Tiyakah Arabs
left us, on the third following morning, we were near the termina-
tion of our journey, now protracted to more than six weeks. . Our
last night in the Desert was glorious: the light of the full
moon lay broad and soft upon the sand—soon after midnight we
struck our tent for the last time, and then pushed on for Cairo.
The moon went down, but the stars yet hovered over the darkened