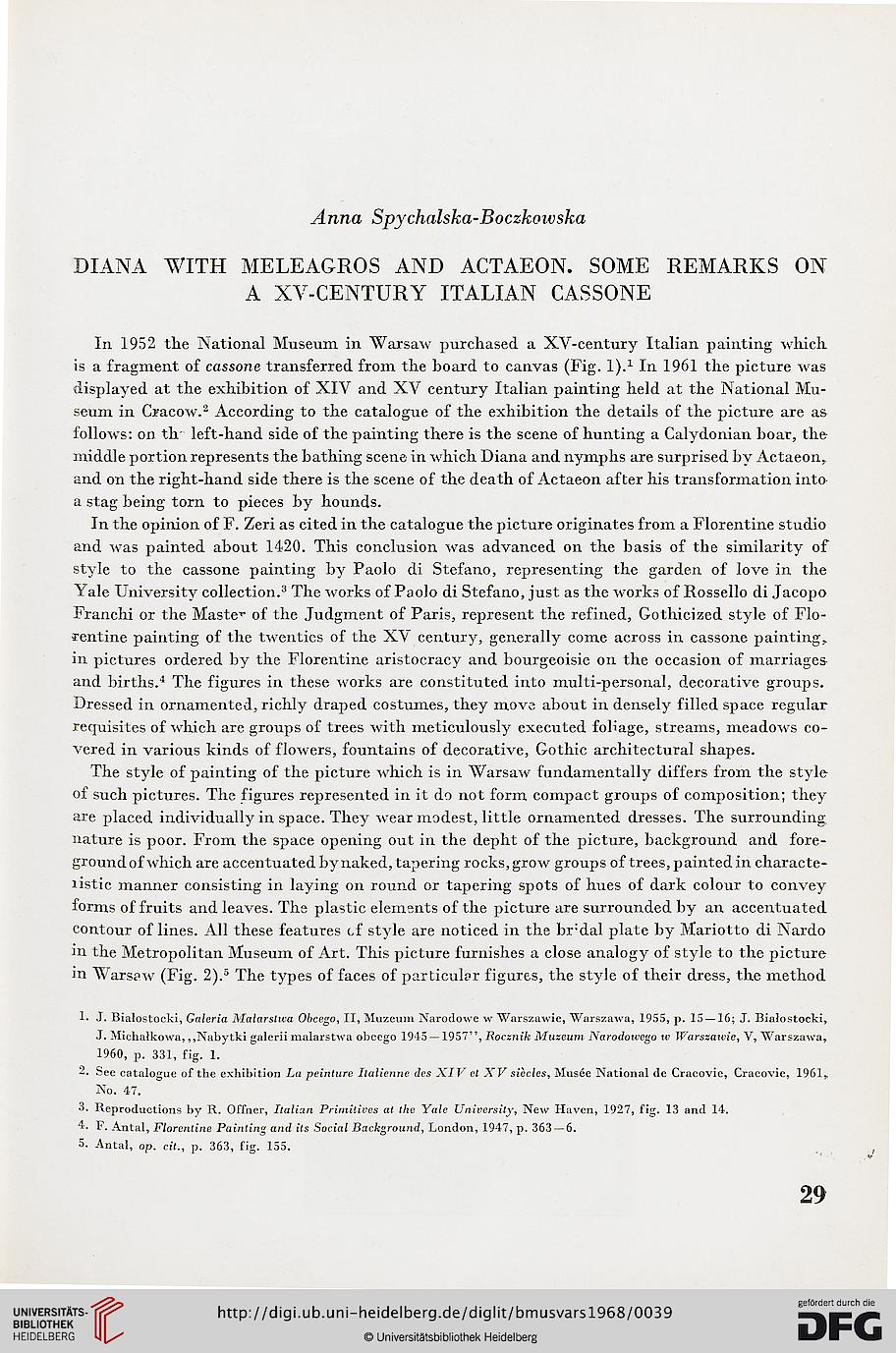 DIANA WITH MELEAGROS AND ACTAEON. SOME REMARKS ON
A XV-CENTURY ITALIAN CASSONE

In 1952 the National Museum in "Warsaw purcliased a XV-century Italian painting which.
is a fragment of cassone transferred from the board to canvas (Fig. I).1 In 1961 the picture was
displayed at the exhibition of XIV and XV century Italian painting held at the National Mu-
seum in Cracow.2 According to the catalogue of the exhibition the details of the picture are as
follows: on tir left-hand side of the painting there is the scenę of hunting a Calydonian boar, the
middle portion represents the bathing scenę in which Diana and nymphs are surprised by Actaeon,
and on the right-hand side there is the scenę of the death of Actaeon after his transformation into
a stag being torn to pieces by hounds.

In the opinion of F. Zeri as cited in the catalogue the picture originates from a Florentine studio
and was painted about 1420. This conclusion was advanced on the basis of the similarity of
style to the cassone painting by Paolo di Stefano, representing the garden of love in the
Yale University collection.3 The works of Paolo di Stefano, just as the works of Rossello di Jacopo
Franchi or the Mastc of the Judgment of Paris, represent the refined, Gothicized style of Flo-
rentine painting of the twenties of the XV century, generally come across in cassone painting,
in pictures ordered by the Florentine aristocracy and bourgeoisie on the occasion of marriages
and births.4 The figures in these works are constituted into multi-personal, decorative groups.
Dressed in ornamented, richly draped costumes, they move about in densely filled space regular
requisites of which are groups of trees with meticulously executed fobage, streams, meadows co-
vered in various kinds of flowers, fountains of decorative, Gothic architectural shapes.

The style of painting of the picture which is in Warsaw fundamentally differs from the style
of such pictures. The figures represented in it do not form compact groups of composition; they
are placed individually in space. They wear modest, little ornamented dresses. The surrounding.
naturę is poor. From the space opening out in the depht of the picture, background and fore-
groundof which are accentuated bynaked, tapering rocks,grow groups of trees, painted in characte-
listic manner consisting in laying on round or tapering spots of hues of dark colour to convey
forms of fruits and leaves. The plastic elements of the picture are surrounded by an accentuated
contour of lines. Ali these features cf style are noticed in the br:dal plate by Mariotto di Nardo
in the Metropolitan Museum of Art. This picture furnishes a close analogy of style to the picture
m Warsaw (Fig. 2).5 The types of faces of particular figures, the style of their dress, the method