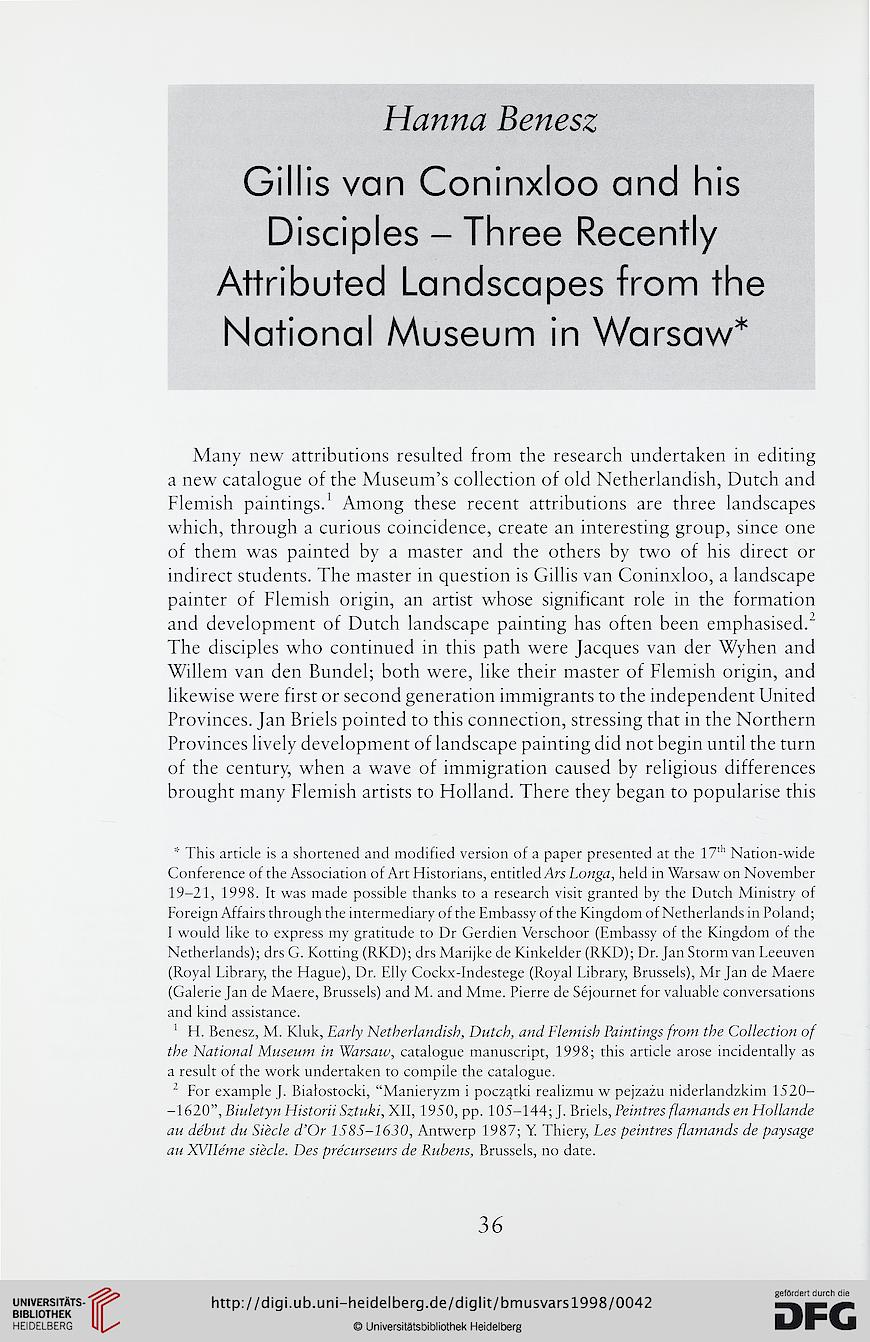 Many new attributions resulted from the research undertaken in editing
a new catalogue of the MuseunTs collection of old Netherlandish, Dutch and
Flemish paintmgs.1 Among these recent attributions are three landscapes
which, through a curious coincidence, create an interesting group, sińce one
of them was painted by a master and the others by two of his direct or
indirect students. The master in ąuestion is Gillis van Coninxloo, a landscape
painter of Flemish origin, an artist whose significant role in the formation
and development of Dutch landscape painting has often been emphasised.2
The disciples who continued in this path were Jacąues van der Wyhen and
Willem van den Bundel; both were, like their master of Flemish origin, and
likewise were first or second generation immigrants to the independent United
Provinces. Jan Briels pointed to this connection, stressing that in the Northern
Provinces lively development of landscape painting did not begin until the turn
of the century, when a wave of immigration caused by religious differences
brought many Flemish artists to Holland. There they began to popularise this

* This article is a shortened and modified version of a paper presented at the 17th Nation-wide
Conference of the Association of Art Historians, entitled ArsLonga, held in Warsaw on November
19-21, 1998. It was madę possible thanks to a research visit granted by the Dutch Ministry of
Foreign Affairs through the intermediary of the Embassy of the Kingdom of Netherlands in Poland;
I would like to express my gratitude to Dr Gerdien Verschoor (Embassy of the Kingdom of the
Netherlands); drs G. Kotting (RKD); drs Marijke de Kinkelder (RKD); Dr. Jan Storm van Leeuven
(Royal Library, the Hague), Dr. Elly Cockx-Indestege (Royal Library, Brussels), Mr Jan de Maere
(Galerie Jan de Maere, Brussels) and M. and Mme. Pierre de Sejournet for valuable conversations
and kind assistance.

1 H. Benesz, M. Kluk, Early Netherlandish, Dutch, and Flemish Paintings from the Collection of
the National Museum in Warsaw, catalogue manuscript, 1998; this article arose incidentally as
a result of the work undertaken to compile the catalogue.