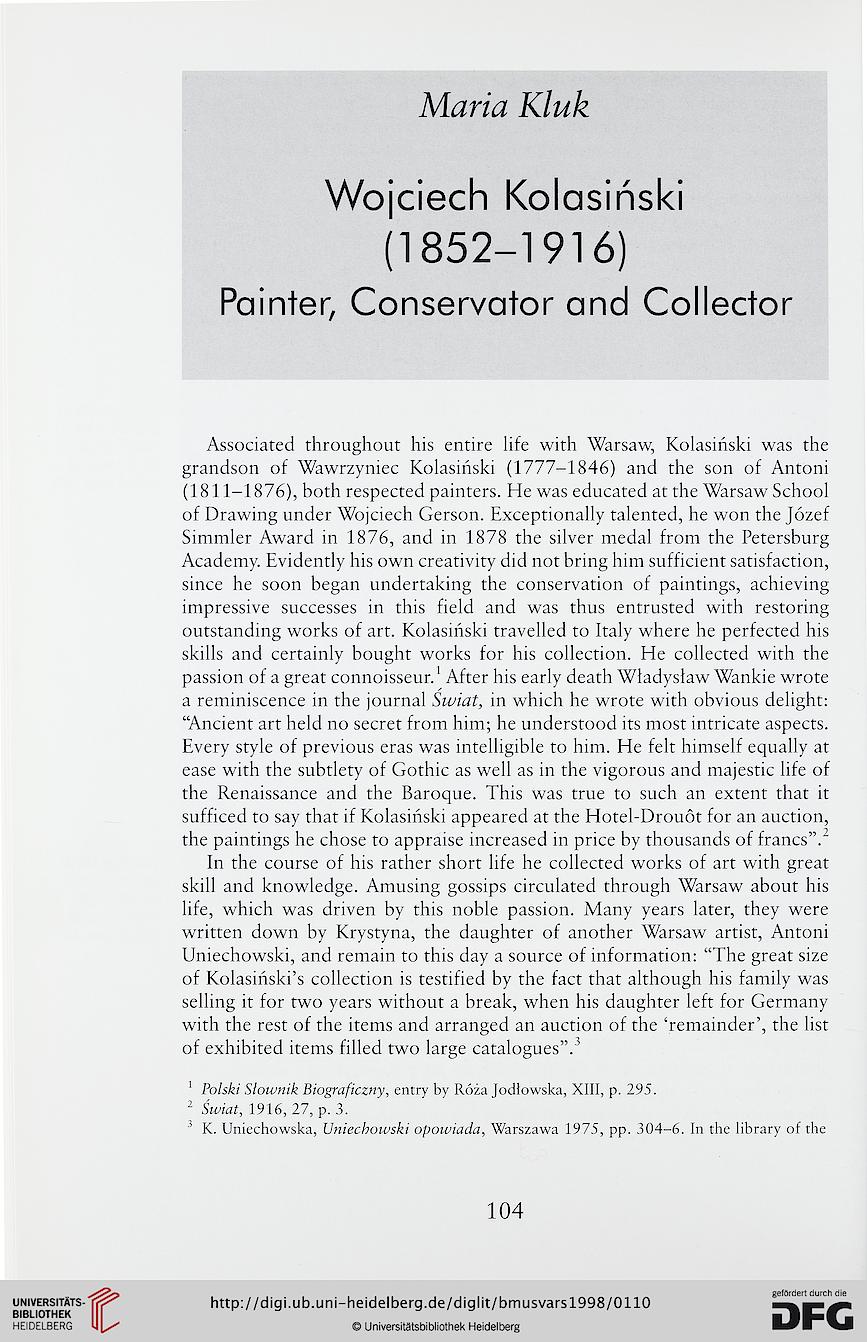 Associated throughout his entire life with Warsaw, Kolasiński was the
grandson of Wawrzyniec Kolasiński (1777-1846) and the son of Antoni
(1811-1876), both respected painters. He was educated at the Warsaw School
of Drawing under Wojciech Gerson. Exceptionally talented, he won the Józef
Simmler Award in 1876, and in 1878 the silver medal from the Petersburg
Academy. Evidently his own creativity did not bring him sufficient satisfaction,
sińce he soon began undertaking the conservation of paintings, achieving
impressive successes in this field and was thus entrusted with restoring
outstanding works of art. Kolasiński travelled to Italy where he perfected his
skills and certainly bought works for his collection. He collected with the
passion of a great connoisseur.1 After his early death Władysław Wankie wrote
a reminiscence in the journal Świat, in which he wrote with obvious delight:
“Ancient art held no secret from him; he understood its most intricate aspects.
Every style of previous eras was intelligible to him. He felt himself eąually at
ease with the subtlety of Gothic as well as in the vigorous and majestic life of
the Renaissance and the Baroąue. This was true to such an extent that it
sufficed to say that if Kolasiński appeared at the Hotel-Drouót for an auction,
the paintings he chose to appraise increased in price by thousands of francs”.2

In the course of his rather short life he collected works of art with great
skill and knowledge. Amusing gossips circulated through Warsaw about his
life, which was driven by this noble passion. Many years later, they were
written down by Krystyna, the daughter of another Warsaw artist, Antoni
Uniechowski, and remain to this day a source of information: “The great size
of KolasińskPs collection is testified by the fact that although his family was
selling it for two years without a break, when his daughter left for Germany
with the rest of the items and arranged an auction of the ‘remainder’, the list
of exhibited items filled two large catalogues”.J