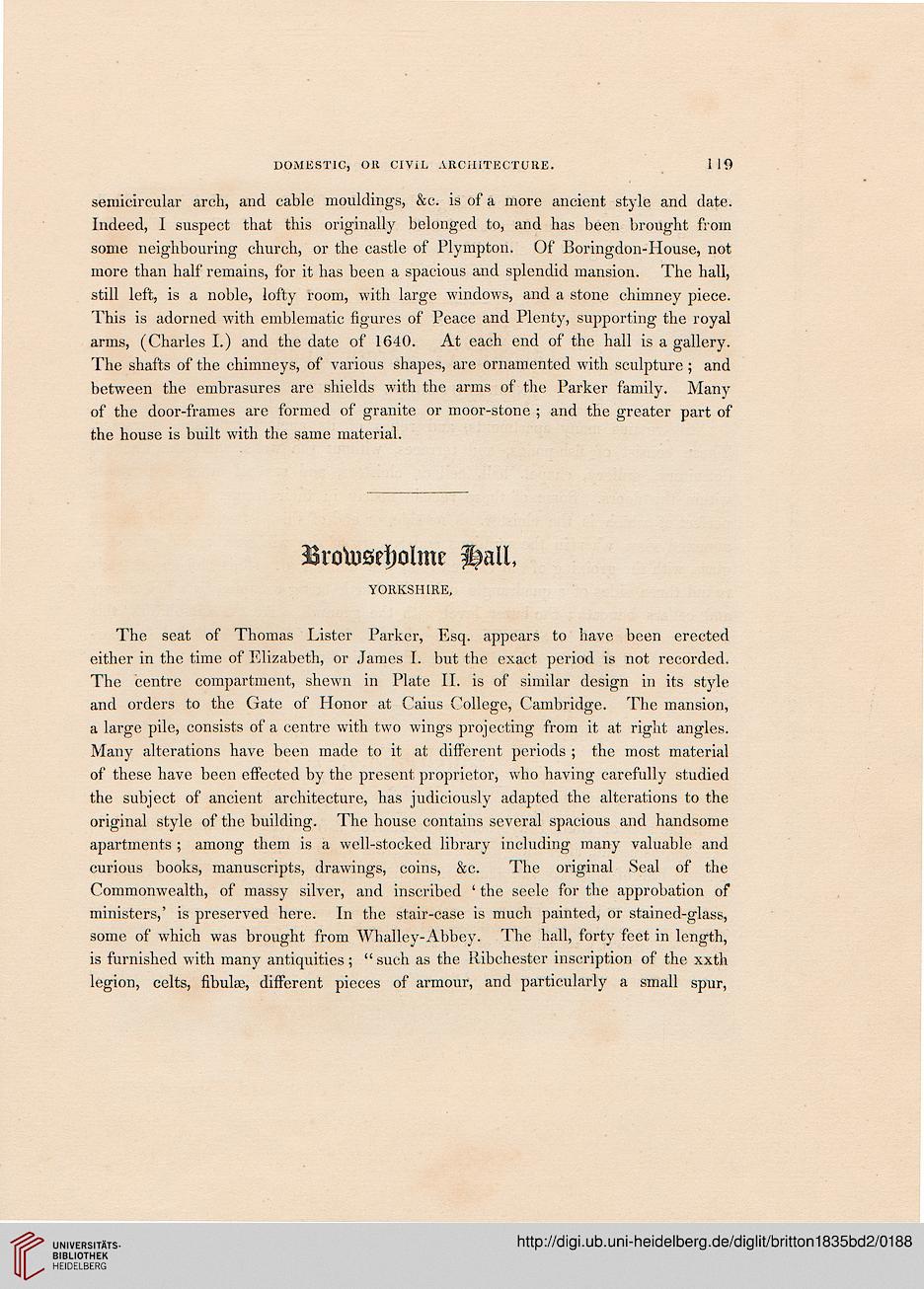 semicircular arch, and cable mouldings, &c. is of a more ancient style and date.
Indeed, 1 suspect that this originally belonged to, and has been brought from
some neighbouring church, or the castle of Plympton. Of Boringdon-House, not
more than half remains, for it has been a spacious and splendid mansion. The hall,
still left, is a noble, lofty room, with large windows, and a stone chimney piece.
This is adorned with emblematic figures of Peace and Plenty, supporting the royal
arms, (Charles I.) and the date of 1640. At each end of the hall is a gallery.
The shafts of the chimneys, of various shapes, are ornamented with sculpture; and
between the embrasures are shields with the arms of the Parker family. Many
of the door-frames are formed of granite or moor-stone ; and the greater part of
the house is built with the same material.

The seat of Thomas Lister Parker, Esq. appears to have been erected
either in the time of Elizabeth, or James L but the exact period is not recorded.
The centre compartment, shewn in Plate II. is of similar design in its style
and orders to the Gate of Honor at Caius College, Cambridge. The mansion,
a large pile, consists of a centre with two wings projecting from it at right angles.
Many alterations have been made to it at different periods ; the most material
of these have been effected by the present proprietor, who having carefully studied
the subject of ancient architecture, has judiciously adapted the alterations to the
original style of the building. The house contains several spacious and handsome
apartments ; among them is a well-stocked library including many valuable and
curious books, manuscripts, drawings, coins, &c. The original Seal of the
Commonwealth, of massy silver, and inscribed ' the seele for the approbation of
ministers,' is preserved here. In the stair-case is much painted, or stained-glass,
some of which was brought from Whalley-Abbey. The hall, forty feet in length,
is furnished with many antiquities; " such as the Ribchester inscription of the xxth
legion, celts, fibulae, different pieces of armour, and particularly a small spur,