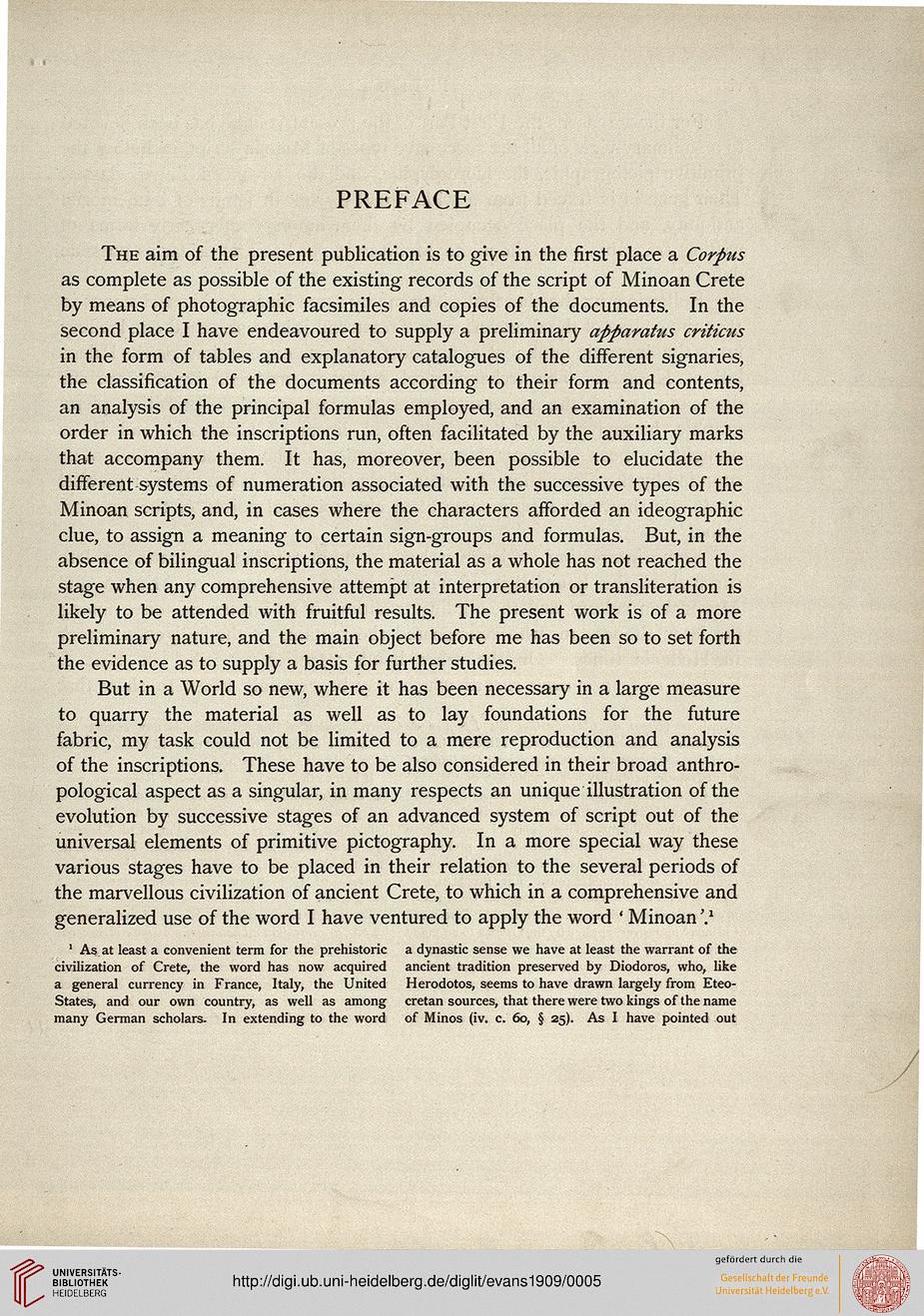 The aim of the present publication is to give in the first place a Corpus
as complete as possible of the existing records of the script of Minoan Crete
by means of photographic facsimiles and copies of the documents. In the
second place I have endeavoured to supply a preliminary apparatus criticus
in the form of tables and explanatory catalogues of the different signaries,
the classification of the documents according to their form and contents,
an analysis of the principal formulas employed, and an examination of the
order in which the inscriptions run, often facilitated by the auxiliary marks
that accompany them. It has, moreover, been possible to elucidate the
different systems of numeration associated with the successive types of the
Minoan scripts, and, in cases where the characters afforded an ideographic
clue, to assign a meaning to certain sign-groups and formulas. But, in the
absence of bilingual inscriptions, the material as a whole has not reached the
stage when any comprehensive attempt at interpretation or transliteration is
likely to be attended with fruitful results. The present work is of a more
preliminary nature, and the main object before me has been so to set forth
the evidence as to supply a basis for further studies.

But in a World so new, where it has been necessary in a large measure
to quarry the material as well as to lay foundations for the future
fabric, my task could not be limited to a mere reproduction and analysis
of the inscriptions. These have to be also considered in their broad anthro-
pological aspect as a singular, in many respects an unique illustration of the
evolution by successive stages of an advanced system of script out of the
universal elements of primitive pictography. In a more special way these
various stages have to be placed in their relation to the several periods of
the marvellous civilization of ancient Crete, to which in a comprehensive and
generalized use of the word I have ventured to apply the word ' Minoan V

civilization of Crete, the word has now acquired ancient tradition preserved by Diodoros, who, like

a general currency in France, Italy, the United Herodotos, seems to have drawn largely from Eteo-

States, and our own country, as well as among Cretan sources, that thereweretwokings ofthename