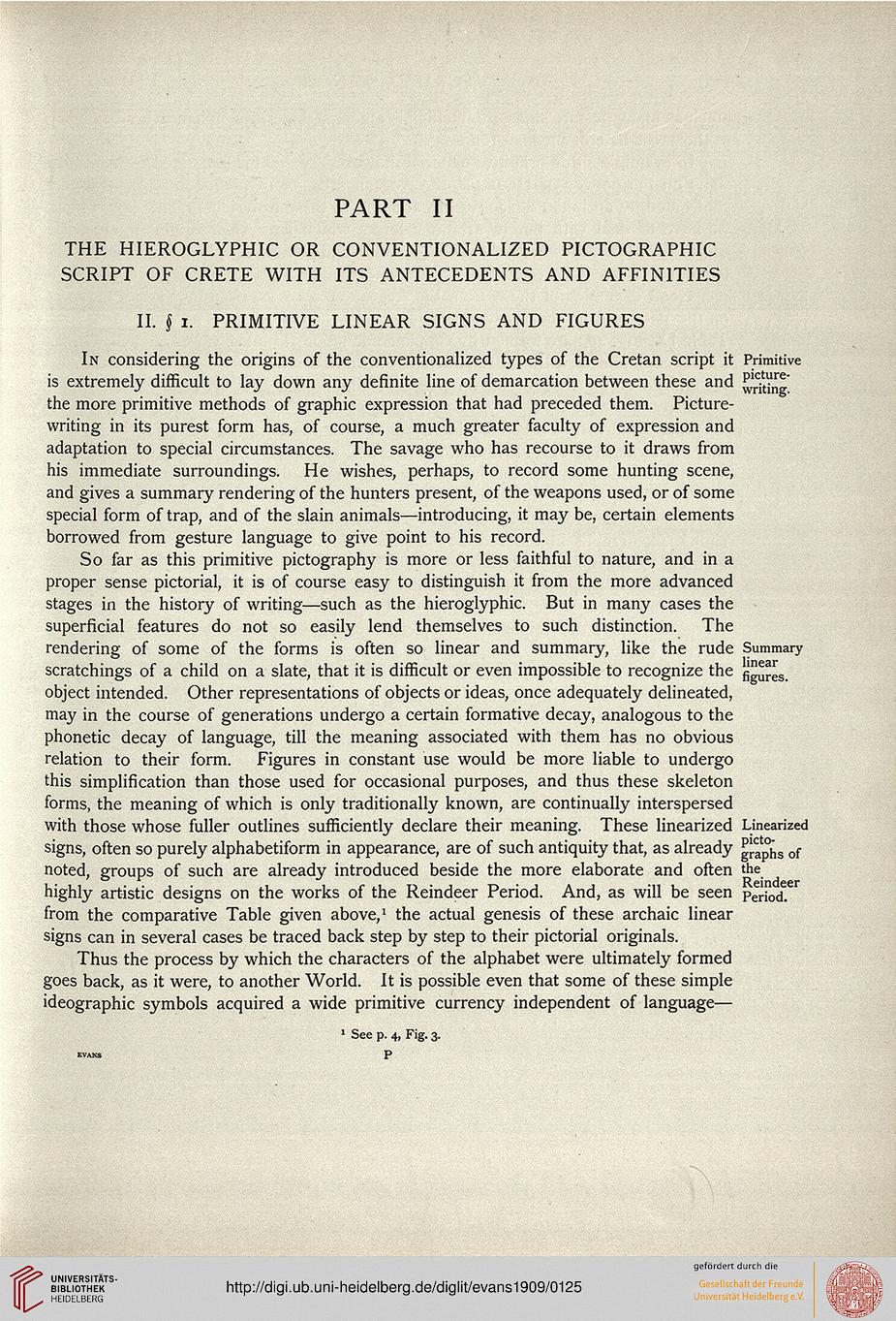 In considering the origins of the conventionalized types of the Cretan script it Primitive
is extremely difficult to lay down any definite line of demarcation between these and ^kbl
the more primitive methods of graphic expression that had preceded them. Picture-
writing in its purest form has, of course, a much greater faculty of expression and
adaptation to special circumstances. The savage who has recourse to it draws from
his immediate surroundings. He wishes, perhaps, to record some hunting scene,
and gives a summary rendering of the hunters present, of the weapons used, or of some
special form of trap, and of the slain animals—introducing, it may be, certain elements
borrowed from gesture language to give point to his record.

So far as this primitive pictography is more or less faithful to nature, and in a
proper sense pictorial, it is of course easy to distinguish it from the more advanced
stages in the history of writing—such as the hieroglyphic. But in many cases the
superficial features do not so easily lend themselves to such distinction. The
rendering of some of the forms is often so linear and summary, like the rude Summary
scratchings of a child on a slate, that it is difficult or even impossible to recognize the g^es.
object intended. Other representations of objects or ideas, once adequately delineated,
may in the course of generations undergo a certain formative decay, analogous to the
phonetic decay of language, till the meaning associated with them has no obvious
relation to their form. Figures in constant use would be more liable to undergo
this simplification than those used for occasional purposes, and thus these skeleton
forms, the meaning of which is only traditionally known, are continually interspersed
with those whose fuller outlines sufficiently declare their meaning. These linearized Linearized
signs, often so purely alphabetiform in appearance, are of such antiquity that, as already ^Siis of
noted, groups of such are already introduced beside the more elaborate and often the
highly artistic designs on the works of the Reindeer Period. And, as will be seen period^
from the comparative Table given above,1 the actual genesis of these archaic linear
signs can in several cases be traced back step by step to their pictorial originals.

Thus the process by which the characters of the alphabet were ultimately formed
goes back, as it were, to another World. It is possible even that some of these simple
ideographic symbols acquired a wide primitive currency independent of language—